On my current project for our mobile applications, we have an API-backend on the Yii PHP-framework, which is working now on an ordinary LEMP stack – Linux/NGINX/PHP-FPM/MySQL (AWS EC2 + MariaDB RDS).

Eventually, it’s time to break this monolith into microservices which will be orchestrated by the Kubernetes and will be running on the AWS EKS service.

In this post will take a brief overview of the main Kubernetes components and its architecture, and in the next posts – will take a closer look to its configuration and usage, alongside with the AWS EKS examples.

There are a lot of useful links in this post, but keep in mind that fact, that Kubernetes evolves very quickly so any examples can become outdated in a few months. 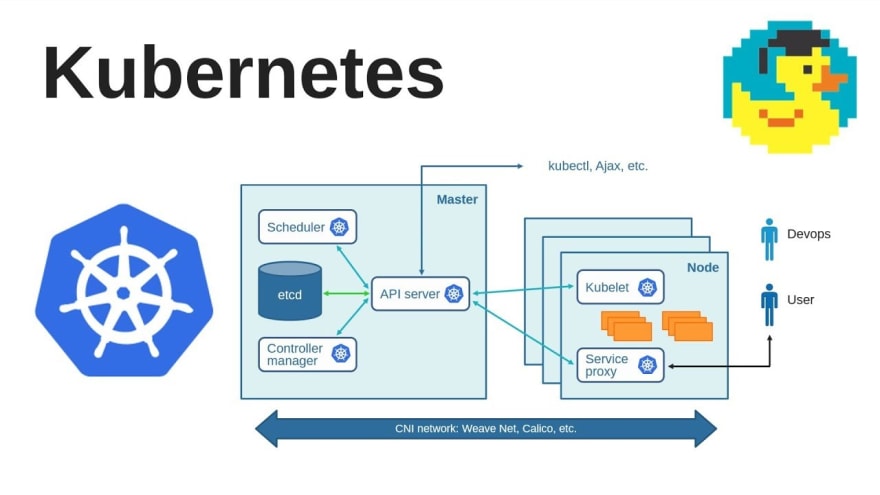 Or a bit more simple one: 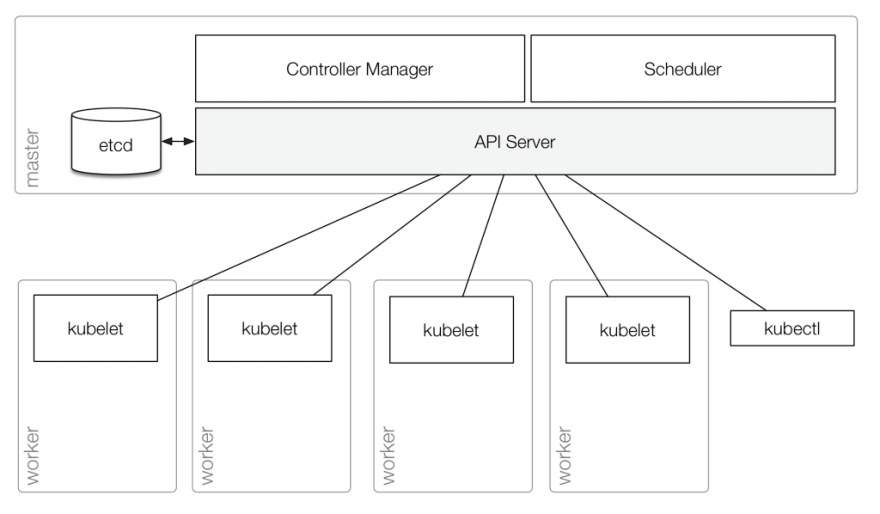 Services running on a Master Node are called “Kubernetes Control Plane” (excluding etcd), and the Master Node is used for administrative tasks only, while containers with your services will be created on a Worker Node(s).

On the Master Node, there are three main Kubernetes components which make the whole cluster working:

Is a key:value storage used by Kubernetes for service discovery and configuration management.

Also, it keeps a cluster’s current and desired states: if K8s will find distinguishes between those states – it will apply the desired state to make it the current state.

Worker Node (previously known as a minion) – a virtual or bare-metal server with Kuberners components to create and manage Pods (see Pod).

Example when a new Pod created:

Above we spoke about more or less “touchable” things such as virtual machines, networks, IP-addresses and so on.

But the Kubernetes itself is just a big piece of an… abstraction, placed upon a physical or virtual infrastructure.

Thus, Kubernetes has a lot of own objects which are abstract or logical Kubernete’s components.

The Pod – main logical unit in a Kubernetes cluster.

Inherently, Pod is kind of a virtual machine inside the Kubernetes cluster: it has own private IP, hostname, shared volumes etc (see. Volumes).

A Pod is a deployment unit (see Deployment) and inside of this “virtual machine” one or more containers will be created, which are tied by a common goal and which are a logical application with one or more processes running.

Each such a Pod is designated to run and serve an only one copy of an application: if you’ll want to make a horizontal scaling – you need to use a dedicated pod per each Worker Node.

Such a nodes group called Replicated Pods and are managed by a dedicated controller (see Controllers).

In doing so containers itself are not the Kubernetes cluster objects and they are not managed by the Kubernetes directly, instead – Kubernetes manages Pods, while containers inside of this Pod shares its namespaces including IP addresses and ports and can communicate to each other via localhost (because of Pod is like a VM).

Services in the first turn are everything about networking in a Kubernetes cluster.

They are used for communications between an application’s components inside and outside of it.

Basically, services are the same Kubernetes objects as Pod, ReplicaSets, DaemonSet are, and you can imagine a Service like a dedicated virtual machine inside of a cluster’s Node.

They can be displayed as the next:

Here is a user who connects to a frontend application via one Service, then this frontend talks to two backend applications using two additional Services, and backends communicates to a database service via other one Service.

Will open access to an application via a cluster’s internal IP, thus will be accessible from within the cluster itself.

Is the default Service type.

This Service type will open access to an application using a Worker Node’s static IP.

Also, automatically will create a ClusterIP service for the application to route traffic from the NodePort. 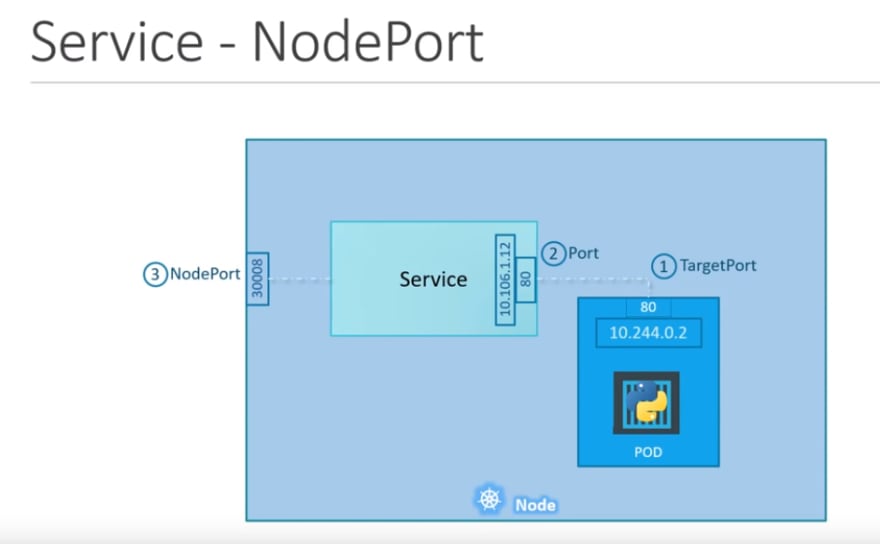 Those networks can be found using the kubeadm config view command:

And again – you can imagine a Service like another one VM inside of your Worker Node, in the same way as about Pods.

To make a Service distinguish which Pod has to be used to route traffic to – the Labels и Selectors are used.

In the pod’s template example above we added labels for our application:

Here it is – the labels:

Then in a Service’s description – we are using selectors:

Thus if a cluster has multiple Pods with such a label – then a Service will try to route traffic to all of them: 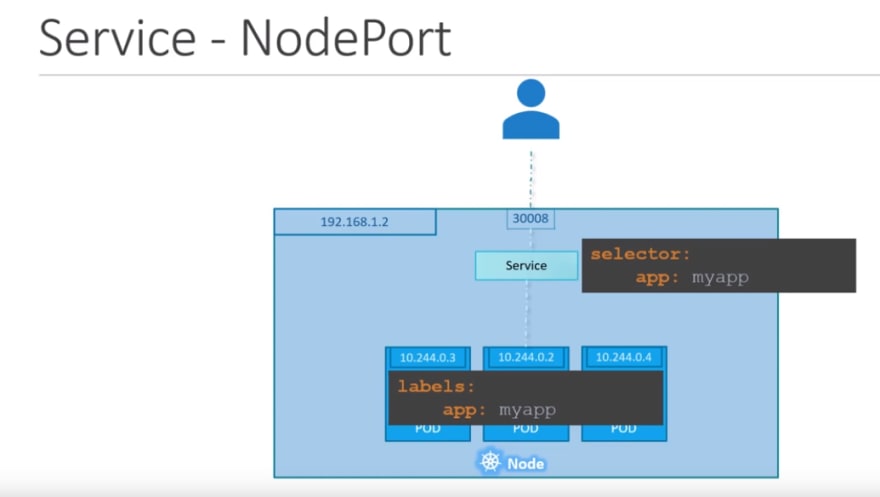 In case if an application placed on multiple Worker Nodes – then a NodePort service will be spread between all those nodes and 30008 port will be opened on every such a node.

Thus, you can access an application via a NodePort service using a Public IP of any Worker Node used: 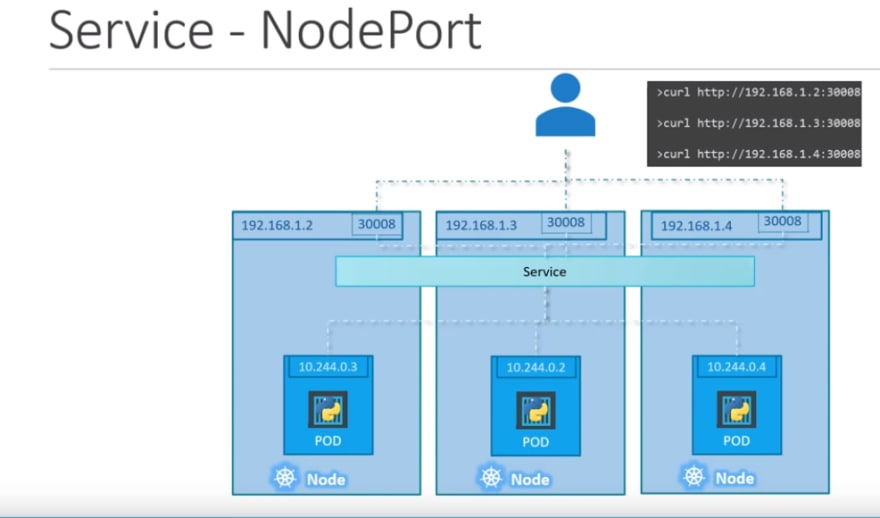 Worker Nodes will be attached to this Load Balancer, and traffic will be routed via internal LoadBalancer service to a node’s NodePort service.

NodePort and ClusterIP will be created automatically.

Will tie the Service to its externalName field value to return its CNAME value.

After it will be created – you can reach it from any Pod via this Service name, for example, my-google-svc as per the template example above:

Also, multiple containers inside of the same Pod can use shared data.

The Volumes concept in the Kubernetes is similar to the Docker’s solution just with much more features.

Namespace in the Kubernetes is kind of a dedicated cluster inside of your existing cluster with its own set of namespaces for networking, disks/volumes, processes and so on.

The main idea behind the Namespaces is to dedicate working environments, users and can be used to set resources usage limits – CPU, memory, etc. See Resource Quotas.

The Namespaces also used in the Kubernetes DNS service to create an URL in a ..svc.cluster.local view.

Most of the Kubernetes resources live in such a Namespaces, you can list them by the:

To list resources living outside of any Namespace – use the next command:

A Controller in the Kubernetes are some continuously working process, which communicates to the API server and checks the current state of a cluster and makes necessary changes to make the current state to be equal to the desired state.

Besides the standard Controllers – you can create your own, see How to Create a Kubernetes Custom Controller Using client-go.

ReplicaSet is the next generation of the ReplicationController and can use multiple selectors (see Service, Pod, labels, selectors).

It’s recommended to use Deployment instead of creating ReplicaSet objects directly.

The Deployment controller will apply changes to Pods and RelicaSets and currently is the most used resource in the Kubernetes to deploy applications.

It’s mainly used for stateless applications, but you can attach a Persistent Volume and use it as a stateful application. 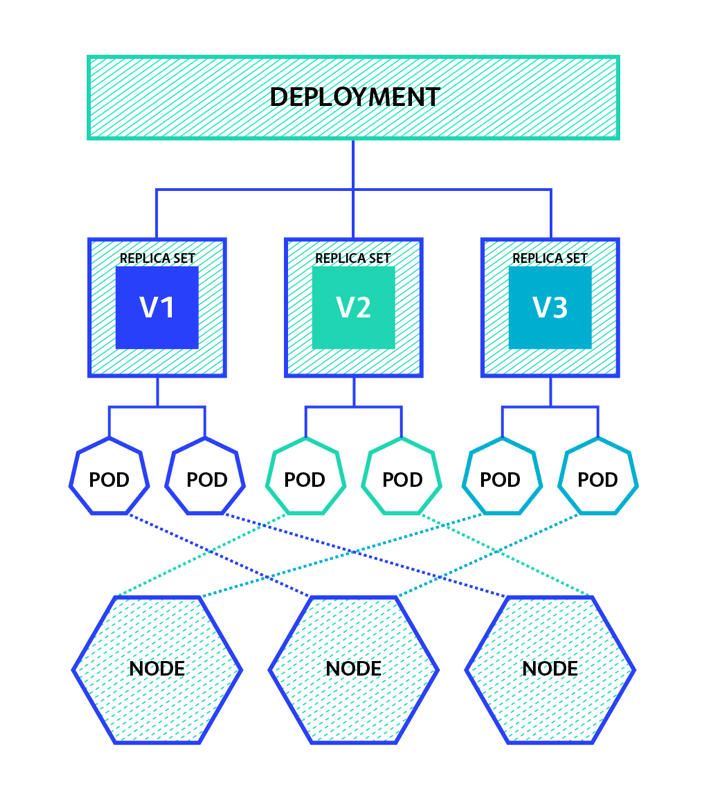 Beside of the Deployments the kubectl rolling-update can be used, although Deployments is the recommended way.

It will create a Pod with a unique name directly instead of the ReplicaSet. Because of this when using StatefulSet you have no ability to run a deployment roll-back. Instead, you can delete a resource or make its scaling.

During the StatefulSet updates – a RollingUpdate will be applied to all nodes.

DaemonSet is used when you need to run an application over all nodes in your cluster – not only on the Worker Nodes. If a new Pod will be created after DaemonSet – an application will be deployed on this new Pod as well.

DaemonSet is the perfect desition to run applications which has to be present on every node, for example – monitoring, logs collectors, etc.

During this, some nodes will decline to create Pods on them, such as the Master Node for example, because it has the node-role.kubernetes.io/master:NoSchedule set (see Taints and Tolerations):

Respectively, when creating a DaemonSet which has to create Pods on the Master Node too you have to specify tolerations.

Such a DaemonSet template example:

During DaemonSet update – the RollingUpdate for all pods will be applied.

Job in the Kubernetes indented to be used to create a Pod which will execute the only one task, once after it will finish a task execution – this Pod will be stopped.

Such a Job can create one or more Pods, can run your tasks in parallel, execute this task specified number of attempts.

Similar to the Job but intended to run tasks by a schedule – check the schedule parameter below: