Var has been with us since the beginning. You might be thinking, "brah this is too basic", but we got to understand how var's work completely and what happens behind the scenes in order to understand the use cases of Const & Let.

The major differentiating factor from the other ways of declaring variables in js is the fact that vars have a function scope. For example:

Why didn't the code break? Because js has a property called "hoisting". It tries to bring any sort of declaration (including named functions)on the topmost scope as possible. Since Vars use function scope, it brings it to the first line of the function. Keep in mind the Var is just being declared, not being assigned a value. That's why we are getting the string 'undefined' instead of 'error:var i is not defined'. Here is an example of what exactly is happening behind the scenes:

Note: The variable's value can be accessed outside the if statement.

Since we understand var's we can now take a deep look into let.

Here's the twist. the scope for all let declarations is the fact that let statements use block scope similar to other OOPS programming languages such as Java or when 'use strict' in js. Block scope means that it can only be used within the whatever is being declared a.k.a the block. Let's (pun intended) take us old example and replace it with let:

As runkit suggests, i can only be accessed in the if statement after the line of the declaration. Hoisting has no power when we declare statements with let.

Const is a very easy to understand, because it's essentially the same thing as var & let (aren't all of them).

Const just like let uses block scope, so it has all the properties of let besides the ability to prevent redeclaration of the variable. Let's take a look at a few examples:

As you can see above, there are a few exceptions. If you have declared a string or a number the value can't be changed either. But when you are declaring as an object, it gets a bit interesting.

Message's properties can be modified, or added but message cannot be redeclared into a integer with a value of 100.

Here is a tiny chart I made: 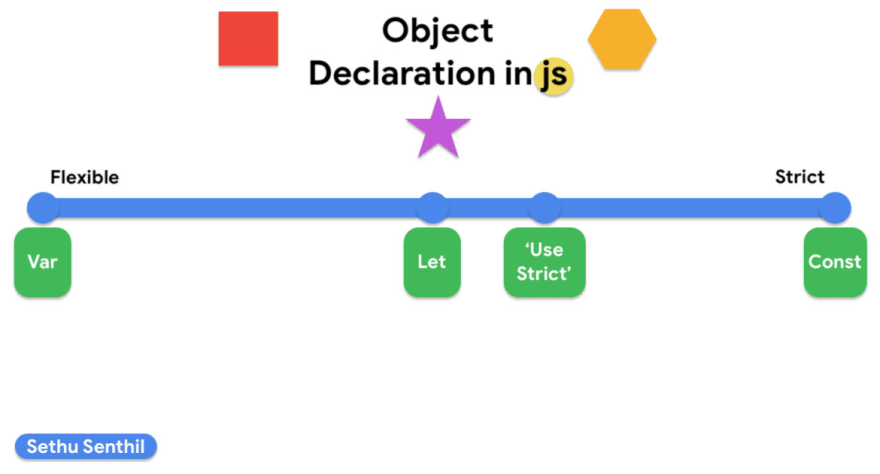 Sethu Senthil
Teen Full Stack Developer
Meme Monday 👁
#jokes #watercooler #discuss
10 Secrets to Skyrocketing Your Career as a Developer!
#webdev #javascript #beginners #programming
5 Life-Changing Lessons I Learned From Being Laid Off That Will Put You Ahead Of 97% Of People
#beginners #productivity #motivation #codenewbie

Once suspended, sethusenthil will not be able to comment or publish posts until their suspension is removed.

Once unsuspended, sethusenthil will be able to comment and publish posts again.

Once unpublished, all posts by sethusenthil will become hidden and only accessible to themselves.

If sethusenthil is not suspended, they can still re-publish their posts from their dashboard.

Once unpublished, this post will become invisible to the public and only accessible to Sethu Senthil.

Thanks for keeping DEV Community 👩‍💻👨‍💻 safe. Here is what you can do to flag sethusenthil:

Unflagging sethusenthil will restore default visibility to their posts.