This was originally posted on my personal blog

In this tutorial, we'll go over how to create a simple custom React hook, testing it locally, and then publishing it on NPM. The React hook we'll create isuseOnlinewhich detects if the user goes offline and shows them a message that they're offline.

After implementing it, we'll check how we can test it locally, then publishing it on NPM.

If you're checking out this tutorial to learn only how to create a custom hook to use it in an existing project without intending on publishing it as a package on NPM, then you can stop before the testing and publishing part of this tutorial. You probably also won't need to go through the Setup part as well.

The code for this tutorial is available on this GitHub Repository.

What are Custom Hooks?

Let's start by creating a new directory and changing to it:

Then, we'll initialize our NPM project:

You'll have to enter some information that will go into package.json like package name, description, author, main entry, etc... You can use the default settings for now.

Once you're done, you'll have an empty NPM package at your hand. Let's now install the dependencies we'll be using to develop our custom React hook:

We're installing React since we are developing a custom hook. We're also installing babel's CLI to build our code later on, and we're installing copyfiles which we will use later as well when we are getting our package ready for publishing.

Once we're done with that, we're ready to implement our custom hook.

Let's start by creating the file that will hold our custom hook. Createsrc/useOnline.jswith the following content:

We're just importinguseStateanduseEffectto use them in a bit, declaring the custom hookuseOnlineand exporting it.

Now, let's get to the code of the hook. First, let's create the state that will hold the user's connectivity:

onlinewill hold the state of the user's connectivity and it will be a boolean. If the user is online it will be true, if not it will be false. For its initial value, we are using the value ofnavigator.onLinewhich returns the online status of the browser.

So, we are adding event listeners to the online and offline events insideuseEffectcallback. We are also passing an empty array as a second parameter foruseEffect. This ensures that the callback is only called on mounting the component.

Now, let's add the logic inside each of the listeners. We just need to change the value ofonlinebased on the event. To do this, we will usesetOnline:

Pretty easy. Our code now adds an event listener to both online and offline events, which changes the value of our state online based on the user's connectivity.

When adding event listeners or adding any kind of subscriptions, we need to make sure that we are cleaning up after the component unmounts. To do that, we return a function inuseEffectthat removes the event listeners on unmount.

The last thing we need to do in our custom hook is return the state we are changing. This way we can use this state in other components with all the logic behind it in one place.

So, the full code foruseOnlinewill be:

That's it! We created a custom hook that makes use of React hooks likeuseStateanduseEffectto determine the user's connectivity.

If you want to publish your custom hook on NPM, you need to prepare the package to be published and used. There are certain things that need to be done, especially inpackage.json.

In the beginning, we installed@babel/cliandcopyfiles. This is where we'll put them into use.

When you first runnpm inityou are asked to enter a few information like package name, description, author, version, license, etc... If you've used the default information, or you want to change this information, make sure you change them prior to publishing. You can do that in thepackage.jsonfile.

Note that thenameinpackage.jsonis the package name that people will use to install it. So, make sure it's exactly what you want to call it.

When publishing a package, make sure you are listing the dependencies required correctly. If some dependencies are only required during development and are not necessary to install when they are being used, then include them underdevDependencies.

In our example, we should have:

Note that the versions might be different in your project but that's fine.

There's one more thing to note: In a React project, only one installation or instance ofreactis allowed. Meaning that your package shouldn't install React as well when installing it in a project.

So, let's changereactto be a peer dependency like this:

When adding a dependency inpeerDependencies, thereactpackage you are using in your project that will include this package will be used instead of installing a new one. We are also allowing the version to be at least16.8.0since that's when React Hooks were introduced.

To make sure our package is ready for use, we will add scripts that will build our React custom hook usingbabel:

Now, whenever we runbuild,prebuildwill run first to ensure that the dependencies required are installed, then the build script will compile the Javascript files in oursrcdirectory (which isuseOnline.js) and outputs the result indist.

If we want our package to be used like this:

Then we need to specify what we are exporting and which file will be used for the import. It's themainfile in our package.

In our case, it will be the output of thebuildscript:

When publishing a package, by default, it will publish all the files and directories starting from the root directory. This can increase the package's size significantly, especially if there are a lot of redundant files or files that are not necessary for the package to be used.

In our example, if you look at theGitHub Repository,  you can see that there's anexampledirectory. We will get to what that holds later, but a lot of times you might have examples, images, or other files that might be necessary for the package development-wise, but not when it's published.

To decrease the package size and make sure only relevant files are included, we use thefileskey:

filestakes an array that holds all the files or directories that should be included in the package once published. In our case, it will just be thedistdirectory that will hold our built code.

This one is purely optional and I'm using it in its simplest form. You can add a Typescript declaration for your package. To do so, we'll createsrc/useOnline.d.tswith the following content:

This will declare the moduleuse-onlinewhich exports the functionuseOnlinethat returns boolean which is the online status.

Next, we will add a new script inpackage.json:

If you are adding your custom hook to your existing project, then you can probably just test it there. However, if you are creating a custom hook to publish online, and you want to test it as a separate package, this section is for you.

If you don't have a project to testuse-online, let's create one just for the purpose by running the following command:

This will create a new directoryexamplethat will hold a Single Page Application (SPA) built with React.

Before changing into that directory. Let's look into how we'd useuse-onlineif it's not actually a package on NPM. As you probably already know, you can install any package on NPM using theinstalloricommand like this:

However, how do we install a package that is only available locally? We will youlinking.

npm-linkallows us to create a symlink of our package in the global folder on our machine. This way, we can "install" local packages in other projects on our machine for purposes like testing.

What we will do is we will create a link ofuse-online, then use it in theexampleproject we just created.

Inside the root directory ofuse-onlinerun the following:

Once this is done, a symbolic link will be created to this package. We can now change to the example directory and "install" theuse-onlinepackage by linking to it:

Once linked, you can now useuse-onlinein this project as if it was installed like any other NPM package. Any changes you make inuse-onlinewill automatically be portrayed in the package.

Before we can useuse-online, let's go its root directory and run the build command:

This will run NPM install, compiles the code withbabel, then (if you followed along with the typescript part) copies the typescript declaration file todist

We will just be adding three 3 lines inexample/src/App.js. First, we will import our custom hook:

Third and last, we will add in the rendered part a condition to display to the user that they're offline:

Notice the line we added:

Whenonlineis false, it means that the user is offline so we're showing them the message. Remember that the logic behind changing the state based on the user's connectivity is actually done insideuseOnline. We just have to use the returnedonlinevalue and everything else is done inside the custom hook.

It will just be the default React page that we see everytime we start a newcreate-react-appproject: 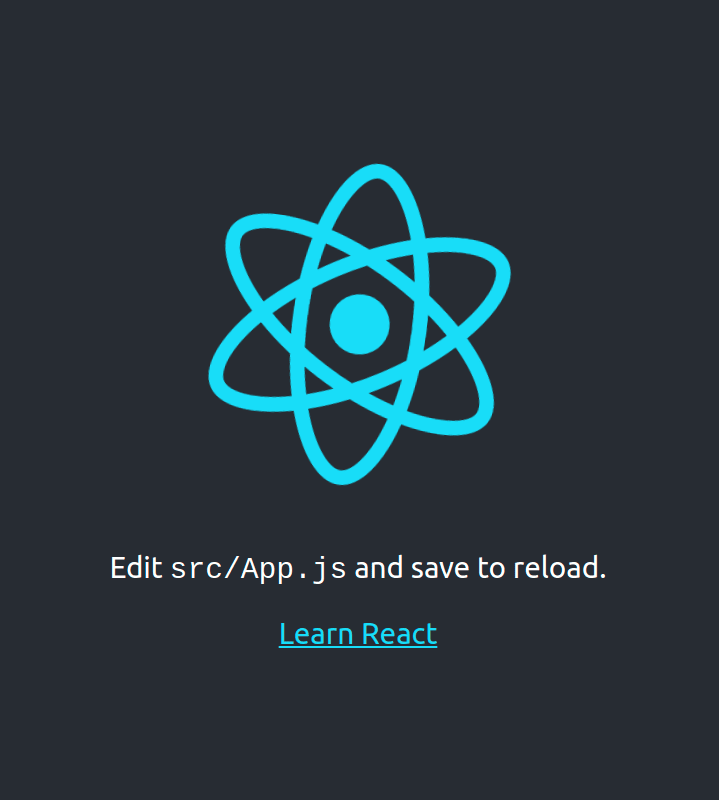 The best way to testuseOnlineby simulating going offline. To do that, open the devtools then go to the Application tab 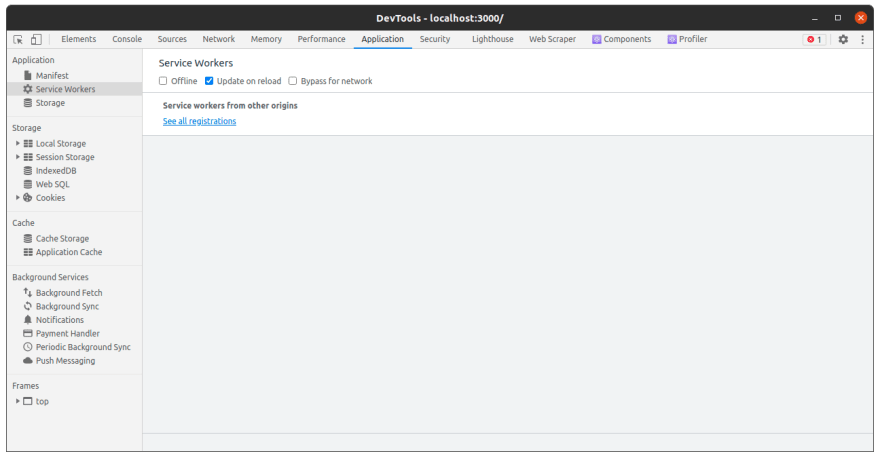 As you can see there's a checkbox to simulate an offline browser. This is used for testing service workers but it will still work for any kind of testing regarding the user's connectivity.

Once you check the Offline checkbox, you should see the "You're Offline" message we added: 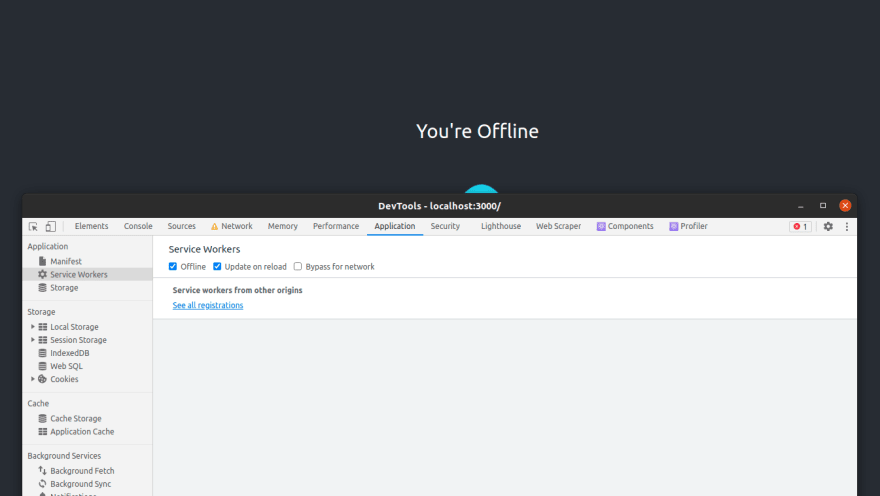 Now that we're done testing our custom hook, and we configured everything in our package, we are ready to publish it on NPM.

First, make sure you have an account onNPM. If you don't, you need to create one first.

In your terminal run:

You'll have to enter your username, password, and email. If it's all correct, you will be authenticated and authorized to publish your package.

In the root directory of your package, run:

Unless any errors occur, that's all you'll have to do! Your package will be live once this command is done running.

If you get an error regarding an existing package with a similar name, make sure to rename your package insidepackage.json:

If your package was published successfully, you will receive an email to notify you about it and you can go ahead and view it on NPM. You can then inside your project run:

And it will be installed just like any package out there!

If you later on decided to fix some bugs or make any changes in your package and you want to update it, just run in the root directory of the package:

Where TYPE can either bepatch(for small bug fixes),minor(for small changes), andmajorfor big changes. You can read more about it here.

Once suspended, shahednasser will not be able to comment or publish posts until their suspension is removed.

Once unsuspended, shahednasser will be able to comment and publish posts again.

Once unpublished, all posts by shahednasser will become hidden and only accessible to themselves.

If shahednasser is not suspended, they can still re-publish their posts from their dashboard.