Hey everyone 👋🏻, in this blog we are going to discuss about :

We are going to discuss 4 different types of functions and we'll transform them from the old rusty ES5 syntax to ES6 syntax.

4 different types are going to be:

1. Named function with no parameters : 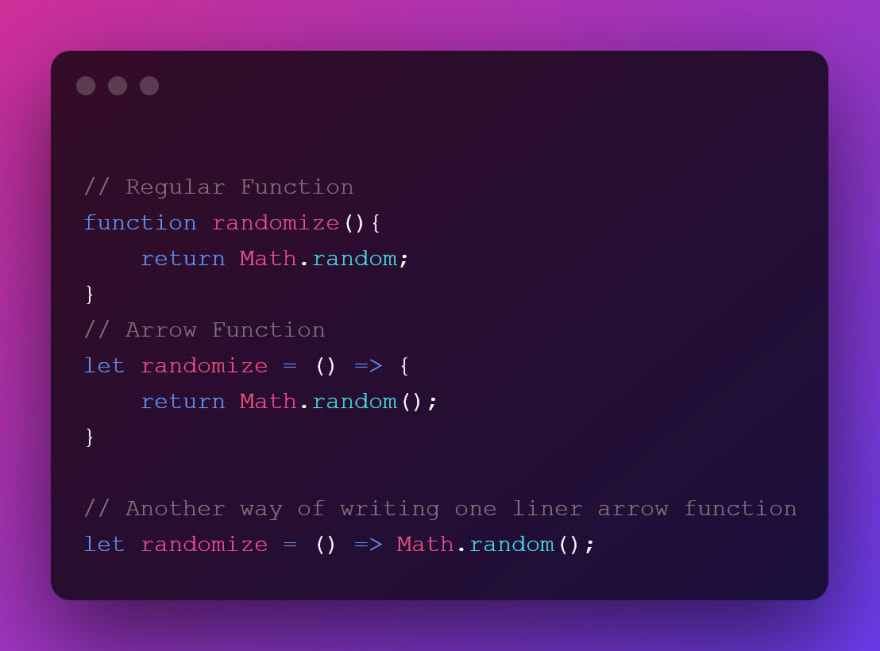 As you can see in the above photo, we have to give the name of the function as a variable name and after an equal symbol = an opening and closing parenthesis ( ) which will denote the function, leading with an arrow => which is nothing but an equal sign and angular bracket.

There is another way of making an one liner arrow function, you just have to give the function name as a variable name and = sign leading with => arrow and the statement you want to return.

2. Named function with one parameter : 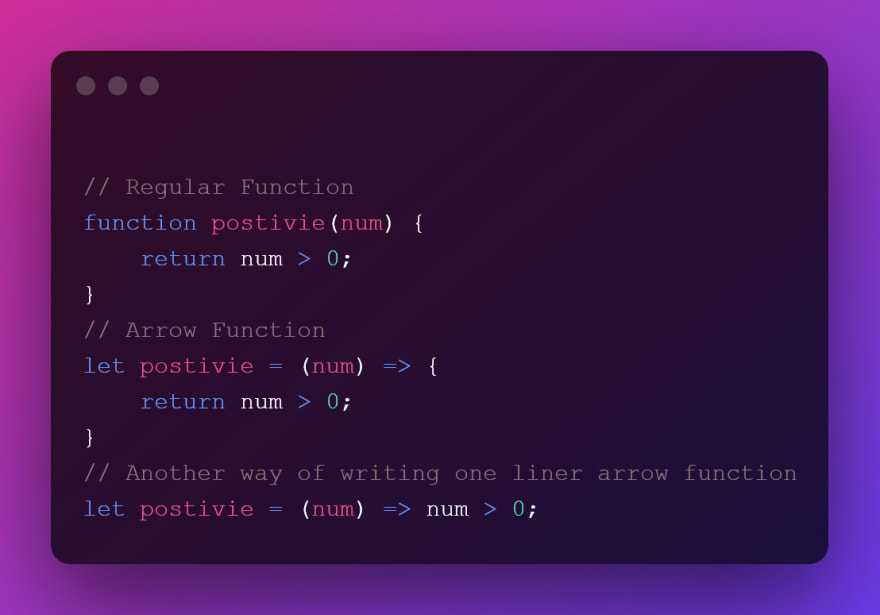 There is no change except in the parenthesis ( ) in which we will pass our parameters. 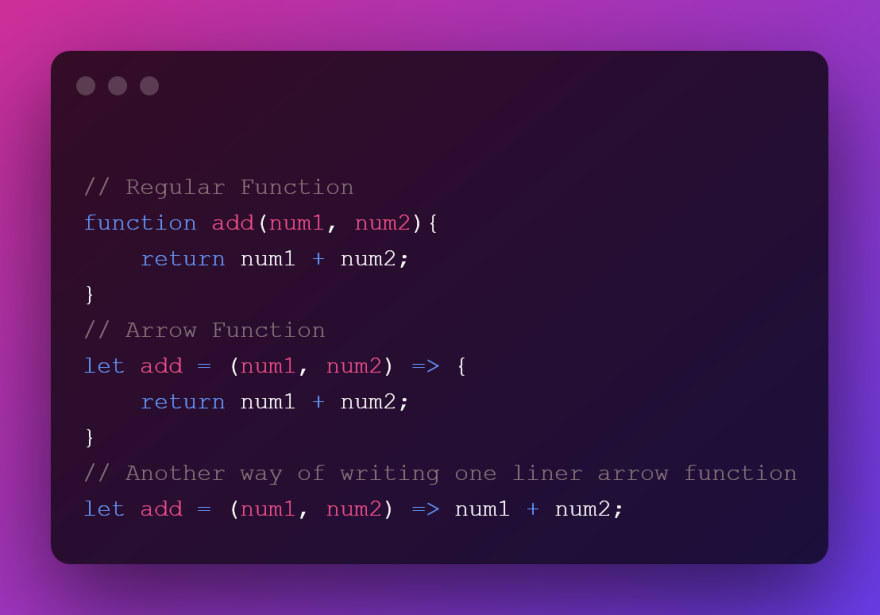 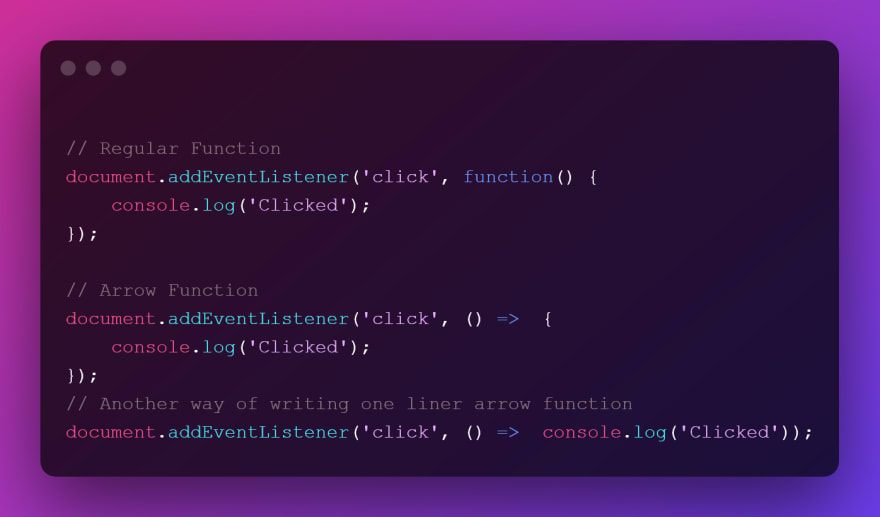 Arrow functions make our code more concise and increases the readability of the code, the new syntax is really easy to adopt and takes no time to understand things.

Apart from writing less and doing more Arrow Function can help us with this keyword and scoping of variables, let me show you how. 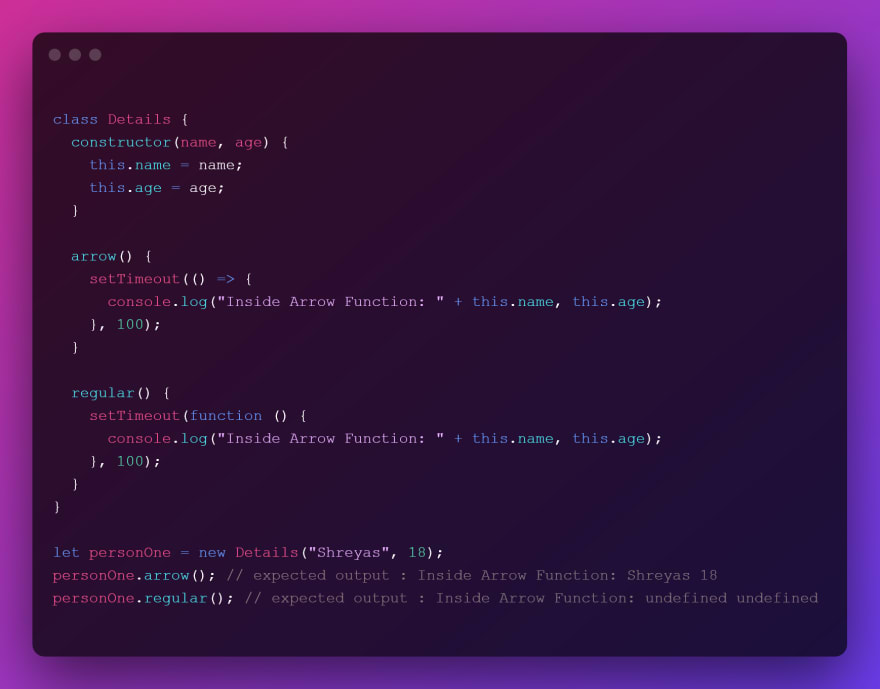 Here in this above image I have made a class with 2 member functions, arrow and regular which consists of setTimeout to make a block of code so that we can see the scope of this keyword using arrow functions v/s regular function.

One disadvantage I feel is, we can not use arrow function to define constructor.

A constructor is a special function which is to be made inside every class, which basically sets default values and initializes them.

In the above example you can see I have made a constructor function, but with normal function's syntax.

Thank you so much for reading the whole blog 🎉! I hope you learnt something and if you did, do implement it, it would make your code more concise and readable.

Shreyas Pahune
Hey there 👋🏻, I am Shreyas Pahune a Full-Stack Web and an App developer who loves to write blogs.
All about Jamstack
#jamstack #javascript #api #markdown
An extensive guide to build your NPM package and publish it.
#javascript #npm #node #tutorial
Basics of Typescript
#typescript #javascript #webdev

Once suspended, shreyazz will not be able to comment or publish posts until their suspension is removed.

Once unsuspended, shreyazz will be able to comment and publish posts again.

Once unpublished, all posts by shreyazz will become hidden and only accessible to themselves.

If shreyazz is not suspended, they can still re-publish their posts from their dashboard.

Once unpublished, this post will become invisible to the public and only accessible to Shreyas Pahune.

Thanks for keeping DEV Community 👩‍💻👨‍💻 safe. Here is what you can do to flag shreyazz:

Unflagging shreyazz will restore default visibility to their posts.