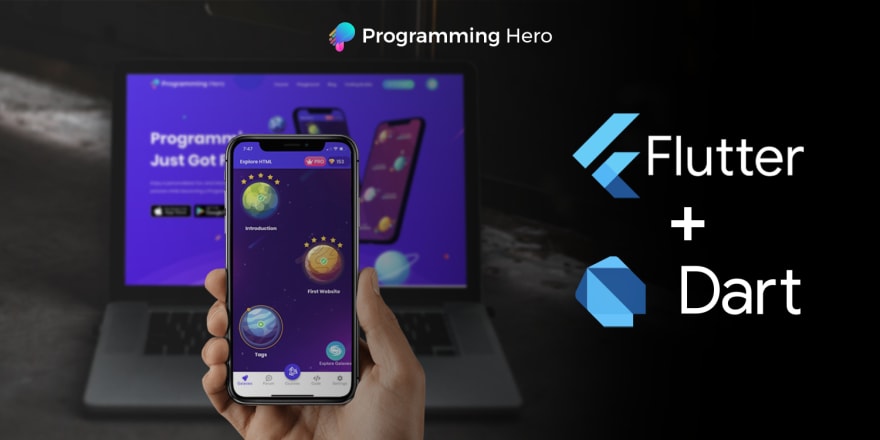 As we were developing the Programming Hero ios app using Flutter, we discovered a few tips, tricks, and libraries. If you are new to this Flutter/Dart world, some of these might help you. 👇

If you need an awesome intro screen but don’t have an awesome idea, Introduction Screen will save you. You'll be amazed.

If you need productivity, Flutter Code Snippet will make you a superstar. You can easily create commonly used Flutter classes and methods. For example, you can create StreamBuilder Widget or SingleChildScrollView Widget by typing the shortcut streamBldr and singleChildSV respectively. You can use the flutter snippet in Android Studio or VSCode.

You don’t have to be the designer to include mind-blowing icons in your app. Just use the font awesome for flutter and you will create magic in minutes.

A good practice is to put your app’s logic in classes separated from your Widgets and then inject it wherever needed. For example, one of my app, we need to access the Prefmanger class from multiple places to read and update the user state stored in the localstorage. We used get_it so that this class can be injectable as a dependency.

Singleton means the class has only one instance and also provides a global point of access to it. It is also an easy one to get wrong if you are not using it carefully. We need to access our ThemeColorclass (dark mode or light mode) again and again to set our theme color in widget . 👇

If you want to prevent unwanted widget rebuilds always use const constructor. In the code below, the instance of BoxDecoration will remain the same even if the setState is called.

Don’t make your code wet 😎. Keep it DRY. Here the word DRY means — Don’t Repeat Yourself. Hence, you should not repeat the same functionality in multiple places.

In my app, I need to convert HTML tags to be displayed on the UI because mighty Flutter is still reluctant to support HTML tags. And, we needed to repeat the code below in several places. That's why I created an extension method that can be used anywhere needed.

Dart has a single dot (.) operator. And a few minutes ago, we talked about three dots (…) . So, one and three dots are covered. Do you feel like anything missing in the middle? You got it correctly. We are talking about the middle person, the double dot (..) which is also known as the cascadeoperator.

You can use the cascade operator to save typing time when multiple method calls on the same object are being made.

11. Knock Out the iPhone Notch with Safe Area

It’s a pain that some of your content is getting cut by the iPhone 10+ notch. The same could happen in Android.

Consider using the SafeArea widget can keep the pesky notification bars and phone notches from encroaching on your app’s UI. It uses a MediaQuery to check the dimensions of the screen and pads its child Widget to match, making sure your app is safe on both iOS and Android!

12. Use Key for Efficient ListView Rendering

To make rendering efficient, use keys on each item. This will make your list view rendering very efficient.

Performance Overlay shows how long each frame took to build and at the top there is the GPU time (Raster Thread) and at the bottom is Ui Time (Ui Thread). If you see a red bar in the UI graph, the Dart code is too expensive. If a red vertical bar appears in the GPU graph, the scene is too expensive to render.

14. Avoid Profiling in the Debug Mode

You will not get accurate performance indication if you profile in the debug mode. Debug mode is by default much slower than production mode. Simulator/ Emulator is not indicative of how your app actually works in Real Device.

15. Use Tracing to Measure Execution Time

You might not know how much time you took to finish your job in the bathroom. However, you can use the Tracing to see how much time is taken to execute.

16. Declare Multiple Variables with Shortcut Usually, I declare my variable most of the time this way

Are you messed up to set icons for both the Android and the iOS version of your app? Don’t worry, I will give you two steps to handle it using the Flutter Launcher Icon. First, setup your config file.

18+. Get That Level Powered by Basic Utils

Do you need extra power in some crucial moments? Consider using basic_util. It contains a list of amazing methods to give you productivity at the right time. For more utils like SortUtils, ColorUtils, DateUtils, IterableUtils, CryptoUtils, HttpUtils in the basic utils.

Let me know the tips & tricks that you discovered while developing your flutter app.

Please feel free to check out our app built with Flutter.

How to Automate CI/CD for Android App with Boilerplate

Shuvojit Kar
10 of the coolest developer T-shirts from devshirt.club
#watercooler #codenewbie #career #writing
What's your favorite science fiction technology that's been turned into something real?
#discuss #ai #watercooler
What was your win this week?
#discuss #weeklyretro

Once suspended, shuvojit007 will not be able to comment or publish posts until their suspension is removed.

Once unsuspended, shuvojit007 will be able to comment and publish posts again.

Once unpublished, all posts by shuvojit007 will become hidden and only accessible to themselves.

If shuvojit007 is not suspended, they can still re-publish their posts from their dashboard.

Once unpublished, this post will become invisible to the public and only accessible to Shuvojit Kar.

Thanks for keeping DEV Community 👩‍💻👨‍💻 safe. Here is what you can do to flag shuvojit007:

Unflagging shuvojit007 will restore default visibility to their posts.