I'm one of the dumb ones.

I've been in the know regarding Bitcoin and blockchain and the next wave of the internet (Web3) for many years. I just haven't paid it any attention.

Well, I've been getting curious again, and I decided to take a quick course after stumbling across a relatively new ed-tech company, _buildspace.

They're a YCombinator company, and pivoted from earlier educational ideas under the name ZipSchool to land on the Web3 space.

Blockchain, Cryptocurrency, Decentralized Apps and other buzz-worthy concepts are flying around the internet these days. And rightly so, as the technology underlying them is quite facinating.

Being a novice still, myself, I won't try and dissect the details here, but rather give a thumbs up for dipping your toes into Web3 if you haven't done so yet.

The courses they've offered thus far have spanned from Smart Contracts on the Blockchain (what I just finished) to minting an NFT (signing up for this one next) to creating a decentralized Twitter clone.

At the onset of our 1-2 week project, Farza, the lead instructor, hosted a live Twitch walkthrough of the course from a high level.

This was a simple and effective nice first step. Whether it's entirely necessary or just baked into my own educational-DNA, having a live teacher-led component (even for just that initial kick-off hour) may have made the difference between browsing through the content and actually making a beginning on it.

The course itself is nicely managed in their online web app, and felt better than other courses I've taken on EdX and Coursera. It benefits from an early stage, small team who embraces the colorful energy, serious subjects and lean paragraphs of web developers and good documentation.

The progress bar at the top added that gamified flare that was never a distraction, but rather a proper, subtle motivating force through the course.

I brought some traditional programming skills into the course, and I think it is necessary to get the full benefit here. A lot of the content can be copied/pasted if you are just flying through and blindly following directions, but as a developer myself, I was able to wrap my head around what was going on.

The course itself is definitly just an overview, but for someone like me who was pretty clueless about anything past the buzz words of Web3, it was a wonderful introduction to how the pieces fit together.

We constructed an actual smart contract, tested it on a local Ethereum network, setup a Cryptowallet (Metamask), deployed the functioning smart contract to a real, live testnet (which lets us emulate the actual Etherum network without paying out real eth or $$$). We built a front end on Replit and spruced it up before connecting our contract to the actual website.

And we made some updates to the contract so that it could store user input messages on the blockchain, and randomly select users to win a little bit of eth. 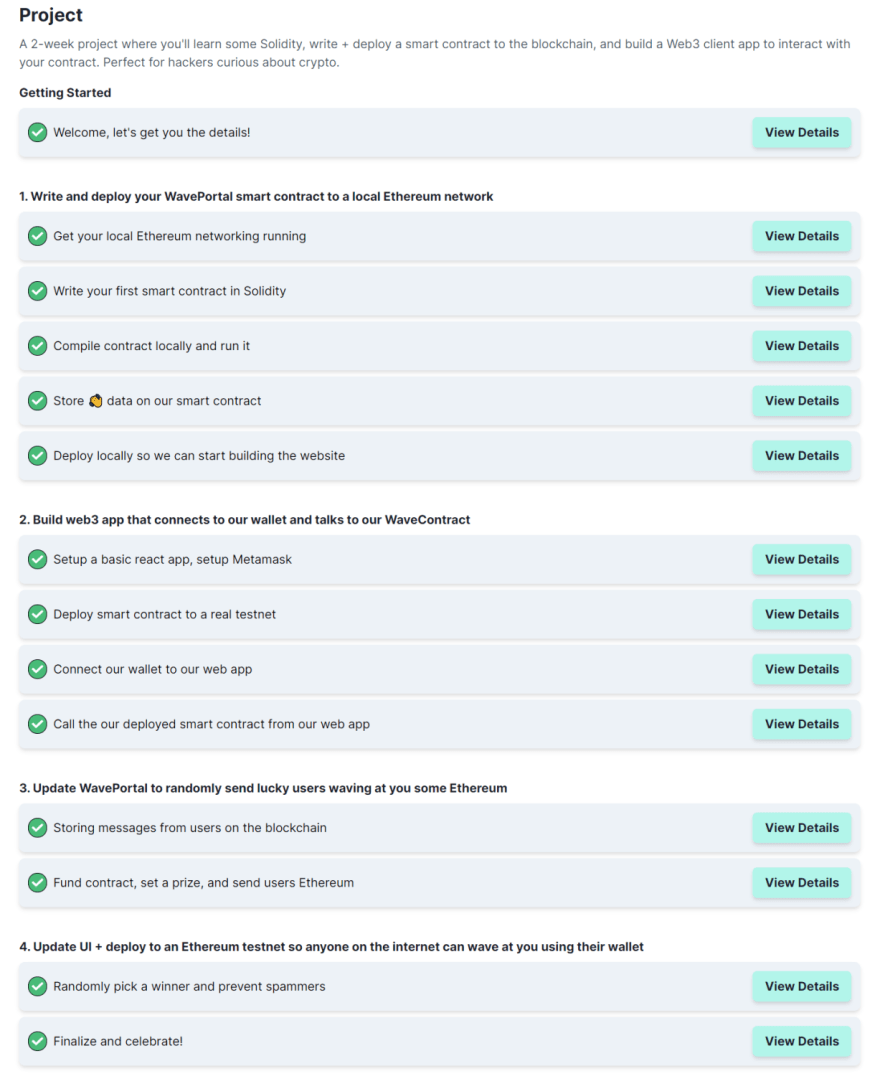 Props to _buildspace. I think their pivot into Web3 education is going to be a solid move for them over the coming several years.

And, as an added bonus, all their curriculum is open source on Github which let me become a contributor to the project by correcting some typos in the project curriculum! Fun stuff!

Hey, thanks for reading. I'm incredibly interested in web development, and write about my journey here and on LinkedIn. I've got a handful of podcasts that sap any leftover creative energy!

Once suspended, sieis will not be able to comment or publish posts until their suspension is removed.

Once unsuspended, sieis will be able to comment and publish posts again.

Once unpublished, all posts by sieis will become hidden and only accessible to themselves.

If sieis is not suspended, they can still re-publish their posts from their dashboard.

Once unpublished, this post will become invisible to the public and only accessible to Eamonn Cottrell.

Thanks for keeping DEV Community 👩‍💻👨‍💻 safe. Here is what you can do to flag sieis:

Unflagging sieis will restore default visibility to their posts.