For some time now you can use NuGet to manage Sitecore dependencies in your Visual Studio projects. But did you know that we now offer assembly list packages as well?

These packages provide you with a list of default Sitecore assemblies being used by various versions. Using these packages you can validate or exclude the Sitecore-provided assemblies from your solution builds.

At this moment we have assembly packages available for the following Sitecore roles/deployment targets:

You can see for yourself which packages are available by running the following NuGet command:

What’s in the packages?

The assembly list packages contain an MSBuild targets file which will be used by your Visual Studio project file whenever you reference the NuGet package. This file contains an ItemGroup called SitecoreAssemblies that lists all Sitecore-provided assemblies (including metadata) for the associated roles.

In this example, I am using a standard Visual Studio Web Application project. It contains no custom code whatsoever other than the default files that come with the project template.

In this example project, I am referencing the Sitecore.Kernel package including its dependencies using NuGet. 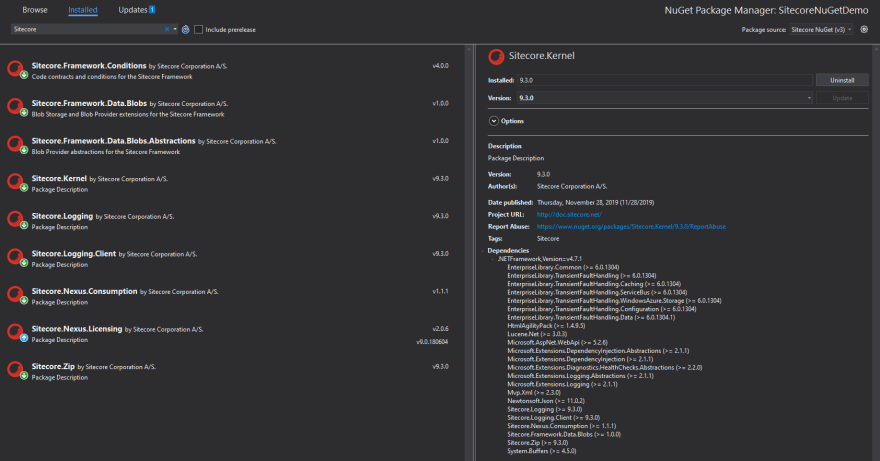 As you can see apart from the Sitecore.Kernel assembly I am also including all of its dependencies.

I have set up a new publish profile to publish my solution to a local folder on disk and ran the publish command. When I look at the output of that command in the folder where I did my publish to, my bin folder contains 53 files.

All my dependencies have been copied to the bin folder of my publish target. 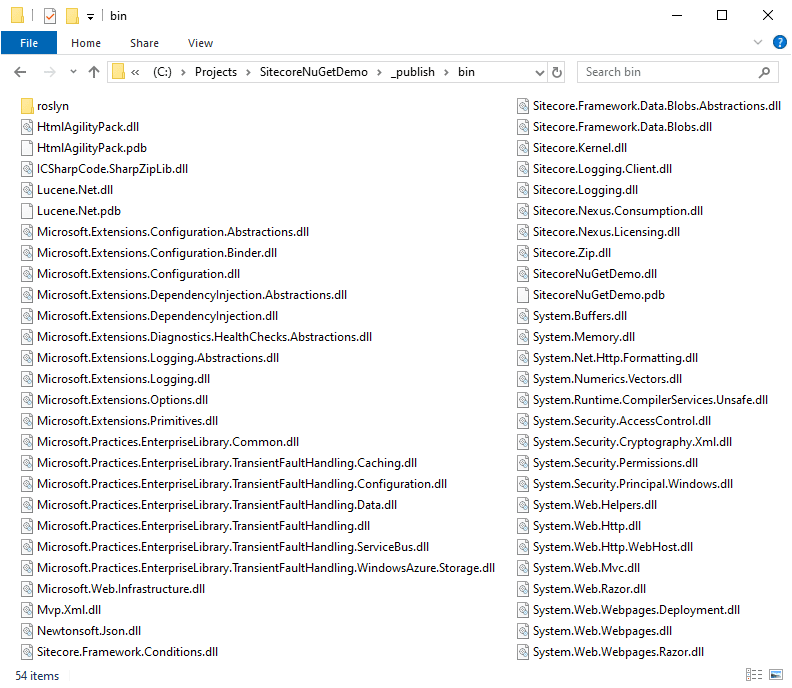 Now, this makes sense since Visual Studio simply publishes all the required assemblies to run my application. But in our case, this is not required as those assemblies are already in the bin folder of our Sitecore instance. This behavior introduces a greater risk that we end up with inconsistency since we could potentially override assemblies with other versions.

We add an XML file to the root of our existing Visual Studio project and name It “ExcludeSitecoreAssemblies.wpp.targets”. In this file we copy the following XML based configuration:

This configuration will make sure to exclude all files that are listed in the the referenced assembly list from deployment. So when we run a new publish command the number of assemblies in our bin folder will drastically be reduced, therefore reducing any risks of compromising existing assemblies.

If you are using Sitecore TDS you will have the option to benefit from these assembly list packages since TDS version 6.0.0.14.

TDS will automatically check the versions at build time if the package is installed in the TDS project. You will need to add the NuGet package to your TDS project and enable “Enable Assembly Validation” in your project properties.

If any assemblies being deployed to Sitecore are different than the expected version, TDS will flag the assemblies with the incorrect version as build errors.

As you can see these new NuGet packages are very easy to use. Reference the package and implement an additional step in the Web Publishing Pipeline (WPP). Therefore you can include these packages in any project that utilizes the WPP to deploy your solution whether you are using standard Visual Studio projects or run custom MSBuild processes.

Charlie Turano shared an example of a custom MSBuild that uses these packages to verify the assembly versions and to generate a build error when there is a mismatch.

This article has been originaly posted on Sitecore Community

Checklist for the case of missing catalog entities in Content Editor

Once suspended, sitecore will not be able to comment or publish posts until their suspension is removed.

Once unsuspended, sitecore will be able to comment and publish posts again.

Once unpublished, all posts by sitecore will become hidden and only accessible to themselves.

If sitecore is not suspended, they can still re-publish their posts from their dashboard.

Once unpublished, this post will become invisible to the public and only accessible to Mark van Aalst.

Thanks for keeping DEV Community safe. Here is what you can do to flag sitecore:

Unflagging sitecore will restore default visibility to their posts.