I would like to present you a simple script which I wrote when I needed to merge the passwords database from LastPass to my current KeepassXC database. 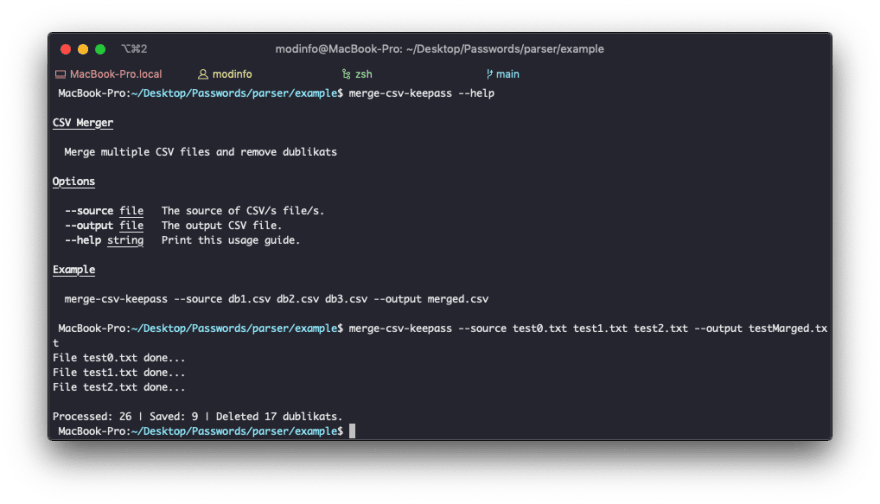 Let's start with my example, you want to migrate from LastPass but you already have existing passwords in Keepass.
You can use merge tool built in Keepass but unfortunately it adds new records without checking if there is already one, which causes duplikats in the database.

That's why I wrote this script which will merge multiple databases exported in CSV and remove duplikats automatically.
But don't worry, if even one column differs, it does not remove it but adds it as a new one. This way you will not lose any entries.

To install and start the CSV database merge you can easily install from npmjs.com

It is very easy to use, after installation you have access to a new command merge-csv-keepass where you just need to add few arguments and you are done!

Example, we have a database db1.csv and db2.csv we want to merge them into a file merged_db.csv to do this we run the command:

Keep in mind that the script does not check if the output file exists! If it exists it will overwrite it!

Of course you can add more databases than just two to merge, or even just one database to only remove duplikats from it.

The whole project is open source and available on Github.

Once suspended, skorotkiewicz will not be able to comment or publish posts until their suspension is removed.

Once unsuspended, skorotkiewicz will be able to comment and publish posts again.

Once unpublished, all posts by skorotkiewicz will become hidden and only accessible to themselves.

If skorotkiewicz is not suspended, they can still re-publish their posts from their dashboard.

Once unpublished, this post will become invisible to the public and only accessible to Sebastian Korotkiewicz.

Thanks for keeping DEV Community safe. Here is what you can do to flag skorotkiewicz:

Unflagging skorotkiewicz will restore default visibility to their posts.