Ever need style for some plain HTML? Then classless CSS frameworks are for you. I started using these when working on code examples for our Best Date Libraries post. The plain HTML examples looked distractingly ugly, but writing I didn't want to write any CSS. I found Sakura, a classless CSS framework. With just one CSS file my examples looked far more polished. And I didn't have to change the HTML at all.

What is a classless CSS framework?

Classless CSS differs from other types of CSS frameworks that target classes. For example, with Bootstrap (the most popular traditional CSS framework) you need to add class="blockquote" to your blockquotes to style them. Or WYSIWYG.css, a "class-light" CSS framework. WYSIWYG.css targets basic HTML elements, but only within a container with class="wysiwyg". 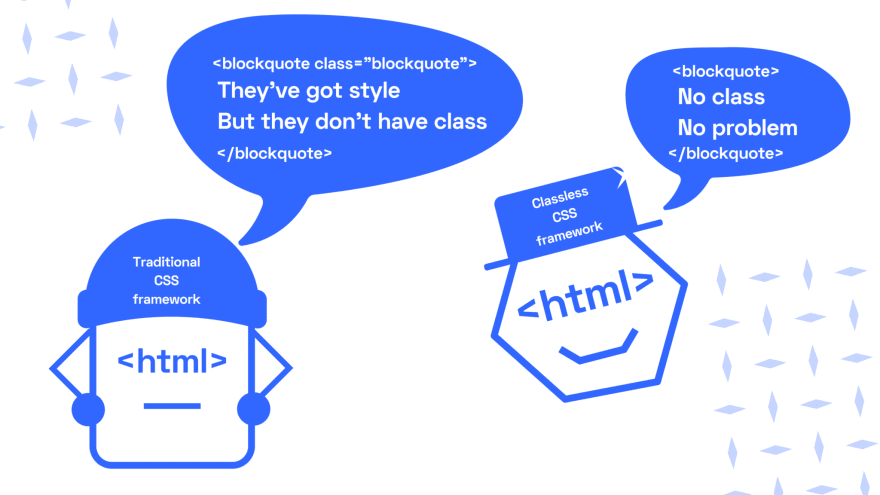 Who are classless CSS frameworks for?

Beyond that, their lack of precision limits design options and can override other CSS, making a larger site design look weird. Furthermore they don't offer much contextual flexibility. For example let's say you want to have headers look different when used on a sidebar vs. the body of a blog post. It's also almost impossible to have a layout beyond a basic single column without using classes.

We picked eleven classless CSS frameworks to test in Codepen. Want to see what they look like when applied to the same page? Toggle them in our Classless CSS Tester Codepen:

I ended up picking Sakura for use in examples in Codepen. Sakura covers most HTML elements I use in examples such as headers. Most importantly, Sakura makes HTML look tidy and readable, but isn't distracting.

If you're building a prototype, MVP.css is a great choice. MVP.css allows you to construct basic user interfaces with plain HTML. If you're at a hackathon or just hacking a side project, check this one out:

If you're building a simple blog and want basic style, holiday.css looks clean and styles the semantic elements commonly used in writing. Plus it has a cool dark mode!

What to look for in a classless CSS framework

Ideally, a classless CSS framework should make text much more readable. Some things to look for are:

It's worth thinking about what HTML elements you want to style. Not all frameworks style the same elements. When I write blog posts I like to use the <aside> element for tips and other tangential information. Many classless CSS frameworks do not style asides, which makes them look like part of a paragraph. On the flip side, there may be elements you do not want to style. MVP.css styles <section> elements which might be confusing on a blog.

Most classless CSS frameworks are small, ranging from 1.3 to 5.1 kb. The exception is those that use custom fonts. Classless css frameworks that use @import for custom fonts are usually around 200-600kb. You have to decide whether those fonts are worth their size.

A classless CSS framework can be as simple as a single CSS file, but others use tools like SASS that output CSS as part of a build process. The advantage of the more complex tool chain is the ability to "theme" the final output. For example, with Sakura you can create your own theme by changing variables in a SASS file. Holiday.css has both light and dark modes and switches based on prefers-color-scheme.

Is CSS really part of accessibility? Definitely! Let's take the humble <a> element for example. If only styled with color, colorblind users may not be able to distinguish links from regular text. WebAIM's Links and Hypertext guidance recommends styling links with an underline. And if links aren't underlined, have higher contrast and hover effects. For further reading on this topic see the WebAIM Contrast and Color Accessibility guidelines.

Some other common CSS accessibility issues:

Do you want to go for a minimal look or a more stylish sparkle ✨? Most classless CSS frameworks are minimalist. But there are a few with a distinctive style like Tufte.css, based on the work of data visualization pioneer Edward Tufte.

How To Convert HTML To PDF Using JavaScript

My Advice to a Developer New to Accessibility

How to create a responsive navbar in NEXT JS?

Connecting the Registration Form To Firebase

Skypack
What text editor should I use? ⌨️
#programming #discuss #productivity
What's worse: Stale documentation or no documentation?
#discuss #documentatio #beginners #programming
I tested every link preview meta tag on every social media and messaging app — so you don't have to! It was super boring!
#webdev #performance #html #webperf

Once suspended, skypack will not be able to comment or publish posts until their suspension is removed.

Once unsuspended, skypack will be able to comment and publish posts again.

Once unpublished, all posts by skypack will become hidden and only accessible to themselves.

If skypack is not suspended, they can still re-publish their posts from their dashboard.

Thanks for keeping DEV Community safe. Here is what you can do to flag skypack:

Unflagging skypack will restore default visibility to their posts.