When the iPad Pro came out, I was skeptical about it being useful for a developer for much, but I decided to splurge for one when I found out about Duet, which lets me use it as a secondary screen for my Macbook. This is invaluable for having documentation on a second monitor.

Recently, I've been reading up on a lot of tools that let you use your iPad as an actual development box, which makes it incredibly more useful to me. To be clear, most of these things are going to require you to have a network connection on your iPad so you can connect to another server like Digital Ocean (disclaimer, that's my referral link for DO), although you can use cloud based tools like Google Cloud, AWS, etc to push up to. The only downside to the cloud based option is that you'll have to push your changes up every time you want to test something, as opposed to just being able to save, switch to Chrome, and reload.

The first thing I had issues with when developing from an iPad was getting disconnected every time I stayed away from my SSH terminal too long looking at a page in Safari. Then I stumbled across Mosh. Mosh uses UDP instead of TCP, and can be setup pretty easily on your server. There's no lag, and it works even through network latency.

This leads me to my next app. Blink Shell is an iOS client for using SSH or Mosh. It's $20, which I initially balked at, but it's well worth the money if you're going to connect to another server regularly from your iPad. It's open source, so if you really don't want to spend that $20, you can always compile it by yourself from the Github Repo.

GNU Screen is probably my most used app on a day to day basis. GNU Screen lets you have multiple windows open that you can switch between with a few key strokes. I'm an old school unix guy, and I hate having to use the mouse or take my fingers off the keyboard for anything. GNU Screen lets me swap between windows easily without having to do that. On most systems, you can install Screen by running apt-get install screen for an Ubuntu/Debian system, or yum install screen for a Red Hat/Fedora based system. The biggest benefit though is that if you get disconnected, you can ssh/mosh back into your system and run screen -x and re-attach your screen session. All of your work is still there, and you don't have to setup your environment each time.

Screen reads from ~/.screenrc and I have mine setup to display a bar across the bottom so that I know what windows I have open and can easily switch to them. 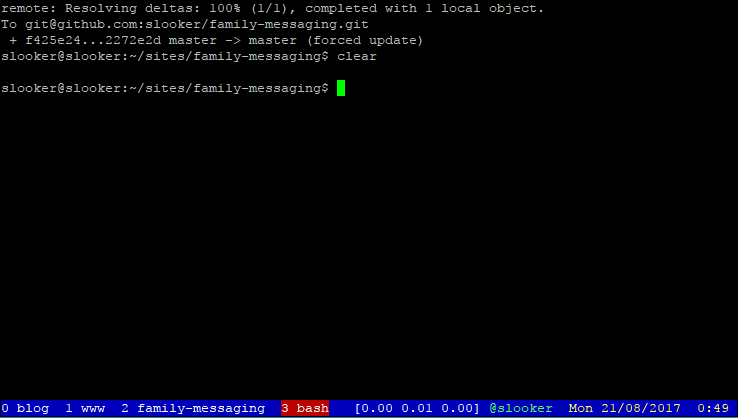 Here is the ~/.screenrc file I use to make this happen:

Here's a list of the most common commands I use for GNU Screen. A more complete reference can be found here

Vundle is a VIM plugin manager. It makes life a lot easier, and I'm not really certain how I lived without it before.

To install it, assuming you already have vim installed, just run git clone https://github.com/VundleVim/Vundle.vim.git ~/.vim/bundle/Vundle.vim. You'll also need to edit your ~/.vimrc file to use Vundle. You can look at the Vundle quick start docs or you can use my .vimrc.

Once you have it installed, startup vim, and type :PluginInstall

This one needs no introduction for most people, and is the default shell for most Linux distributions. The one minor thing I add is the Git branch in my command prompt. You can do this easily by adding this to your ~/.bashrc

This gives you a prompt that looks like this (at least on my machine):

My editor of choice when using my iPad with Digital Ocean is vim. I grew up using vi, so vim is second nature to me. Here's a simple cheat sheet for the things I use most in vim, but you can find a much more lengthy cheat sheet here.

One of the things I can't live without with vim is this line in my ~/.vimrc:

This makes it so that when I open up more than one file using :split <filename>, I can hit <tab> to switch between the two files, and it will maximize the file that I just switched to. 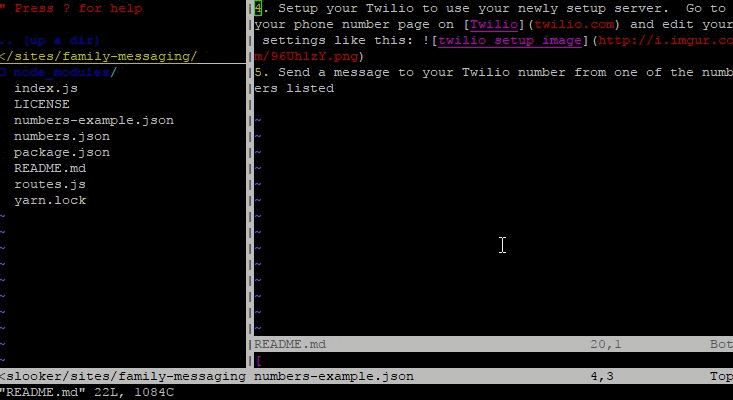 The last two things I use in vim to make my life easier are Nerdtree Tabs and Ctrl-P. Nerdtree tabs are what you see on the left side of the image just above. It's similar to most editors you see like VS Code, Sublime or Atom when you open a folder instead of a single file.

Ctrl-P is a fuzzy search file finder for vim. If you type ctrl-p and start typing a word, it will do a search through your file tree to find it.

How to deploy Amplication app to DigitalOcean

Some useful Libraries for .NET projects

Once suspended, slooker will not be able to comment or publish posts until their suspension is removed.

Once unsuspended, slooker will be able to comment and publish posts again.

Once unpublished, all posts by slooker will become hidden and only accessible to themselves.

If slooker is not suspended, they can still re-publish their posts from their dashboard.

Once unpublished, this post will become invisible to the public and only accessible to slooker.

Thanks for keeping DEV Community 👩‍💻👨‍💻 safe. Here is what you can do to flag slooker:

Unflagging slooker will restore default visibility to their posts.