Extensions let users add language, debuggers, and tools to VS Code to support their development workflow. VS Code has rich extensibility model which lets extension access to UI and contribute functionality.

Generally, more than one extension would be installed in VS Code, so as an extension developer, we should always care about performance of the extension to avoid slowing down other extensions or even the main process of VS Code.

Some rules we should follow when develop an extension:

The first three rules mentioned above are followed by many developers. In this article, we will discuss about a way to load modules on demand, which should meet the habits we write TS or JS to import modules, and require as little cost to change existing code as possible.

Commonly, we use import statement to load modules on top of the script as code shows below:

Node loads the specific module synchronously as soon as we import it, and blocks rest code behind.

What we need is a new method, called impor for example, to import module without loading it:

To reach this target, we need to use Proxy. The Proxy object is used to define custom behavior for fundamental operations.

We can customize get method to load the module only when it is called.

With use of Proxy, osModule would be a Proxy instance, and os module will be loaded only when we call one of its methods.

import {...} for ... is widely used when we only want to use part of the module. However, it may make Node have to access to the module to check its properties. Thus, getter will be executed and the module is loaded at that time.

Load on demand still is not enough. We can move forward a single step
to improve the user experience. Between the extension startup and the module requirement when user executes a command, we have enough time to load the module in advance.

It's an obvious idea to make a job in the background to load modules in a queue.

Because of the big scope of Azure IoT Device Workbench touches, the extension is very heavy to activate. Also, it needs always to activate to listen USB event to take actions when IoT devices connect to the computer. 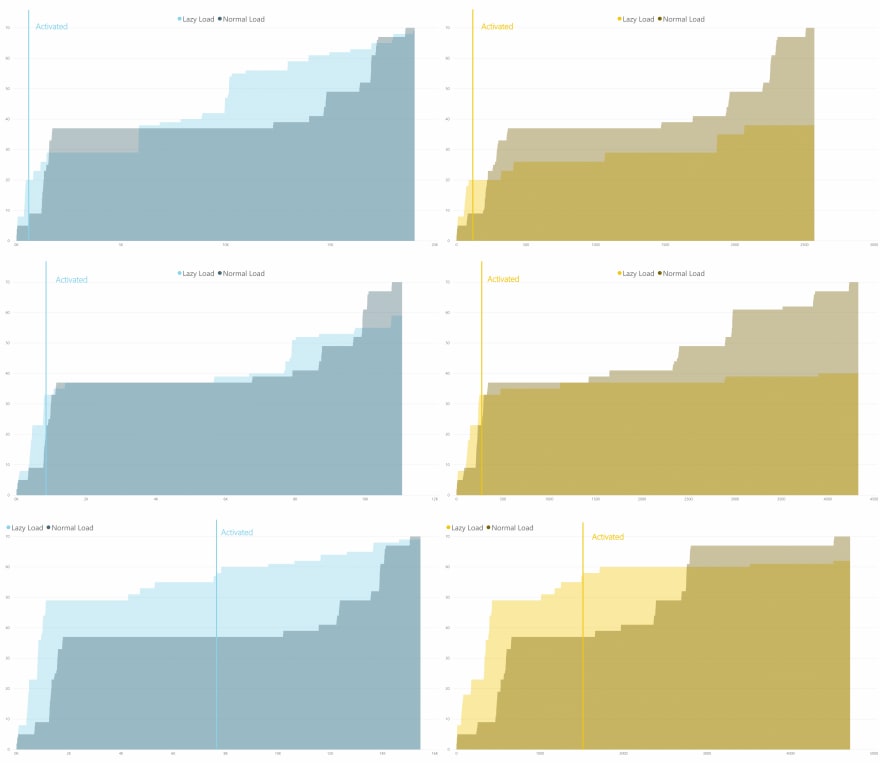 We have compared with lazy load and normal load for Azure IoT Device Workbench in different cases. From top to bottom in Figure 1, the charts are for launch without workspace open, non IoT project workspace open, and IoT project workspace open. The left charts are for cold boot, and the right for warm boot. Cold boot only happens when the extension is installed at the first time. After VS Code makes some caches, the extension always launches with warm boot. X-aixs is for time of millisecond, and Y-aixs is for loaded module number. 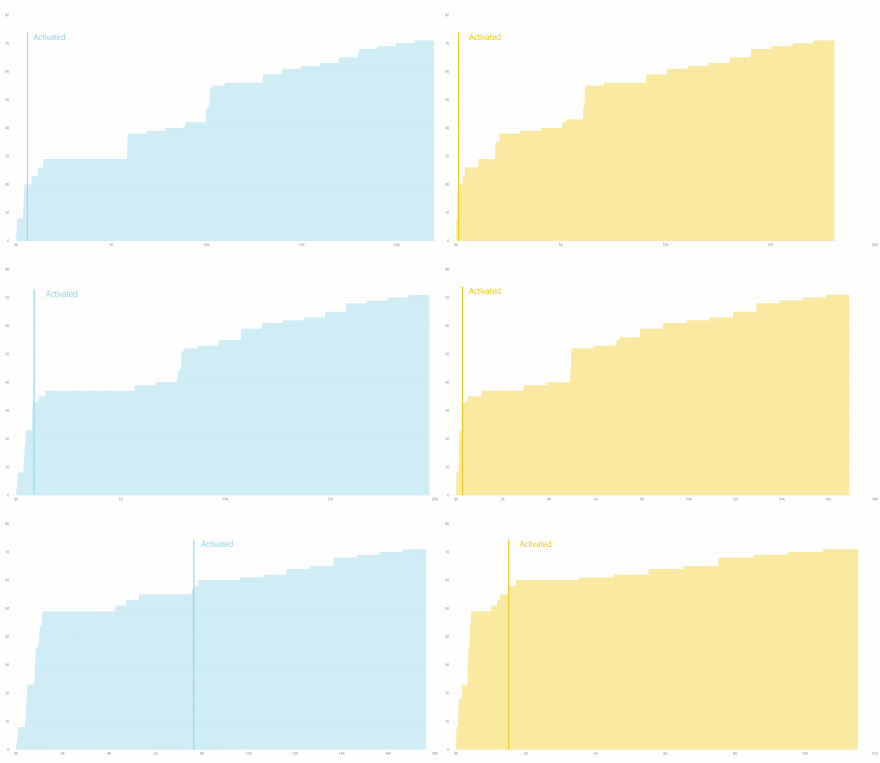 Load timing stage of modules loaded by background job after activated shows in the charts very clearly. The user can hardly notice this small action, and the extension launches quite smoothly.

To make this performance improvement available to all VS Code extension developers, we have published a Node module called impor and have used it in Azure IoT Device Workbench. You can apply it in your project with very little code change.

Almost all of the VS Code extensions have Node module dependencies. Because of the way Node module works, the depth of dependency level may be very deep. Other, structure of the module may be complex. And that is what Node module black hole talks about.

To clean up Node modules, we need an awesome tool, webpack.

Webpack is a static module bundler for modern JavaScript applications, such as VS Code extension. When webpack processes the application, it internally builds a dependency graph which maps every module the project needs and generates one or more bundles.

Tree shaking is a term commonly used in the JavaScript context for dead-code elimination. It relies on the static structure of ES2015 module syntax, i.e. import and export. The name and concept have been popularized by the ES2015 module bundler rollup.

It is very easy to make a tree shaking with webpack. The only thing we need is to specific an entry file and its output name, webpack will handle the rest things.

With tree shaking, untouched files, including JavaScript code, markdown files, and etc, will be removed. Then webpack will merge all code into a single bundled file.

Merging all code into one file is not a good idea. To work with load on demand, we should split the code into different parts, and only load the part we need.

To apply the bundled modules, we can put them into node_modules folder in tsc output directory.

If a module is incompatible with webpack bundle, it can be just copied to the output directory node_modules folder.

Without bundling Node modules, there are 4368 files in Azure IoT Device Workbench, and only 343 files are left after applying bundled modules.

Instead of bundling the entire extension, only bundling modules respectively can make a big benefit of packing. It is very possible that the extension throws dozens of errors after webpacked'. Splitting every module into a single file makes it easier to debug. Also, loading specific bundled module on demand will minimize the impact on performance. 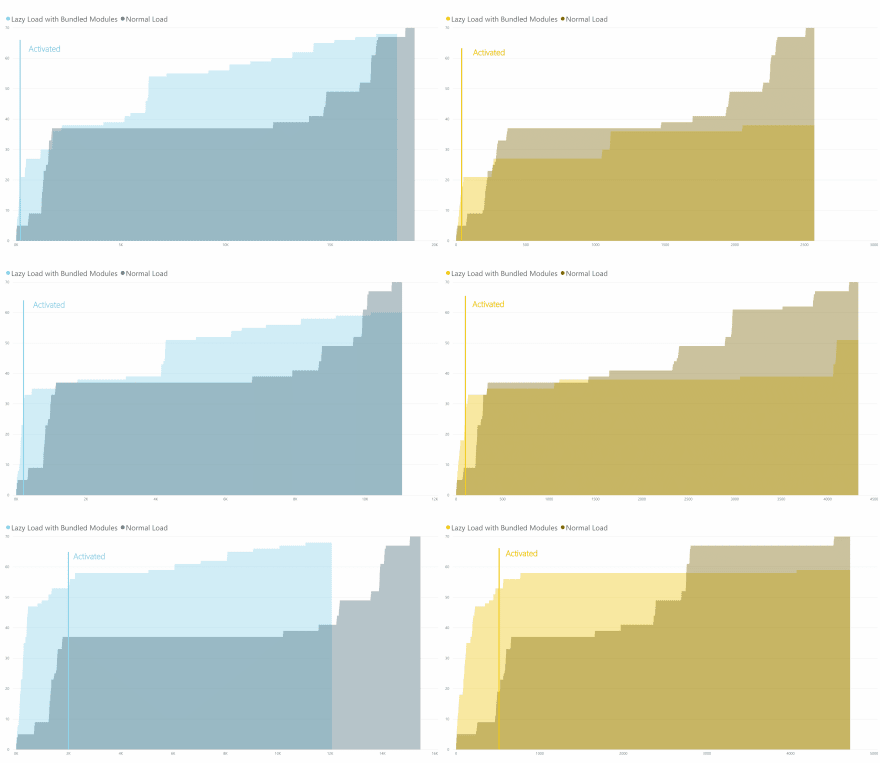 Activation time shows in Table 1 is between very beginning of the entry to the extension and the end of activate function:

Activation time of classic webpack solution only has relationship to boot mode, because all modules are always loaded in the same way. When applying lazy load on Azure IoT Device Workbench, it starts up further faster without workspace open than with IoT workspace open, no matter whether with or without bundled modules. When we open an IoT workspace, most modules are required, and the benefit taken from lazy load is not obvious, so lazy load with bundled modules has similar activation time with classic webpack solution.

In this article, a load bundled modules on demand method is proposed. A heavy extension called Azure IoT Device Workbench is tested for the method of multiple cases, and its startup speed has been increased to dozens of times. In some cases, this method also shows better performance than classic webpack solution.