Ruby on Rails (RoR) for web development gained popularity among a huge chunk of web developers. It has been more than a decade and a half since Ruby made a splash on the web development scene. With its syntactic beauty and readability, ease of developing an MVP, and a robust online community, Ruby has now made strong inroads into the developer community.

Companies like Airbnb, Bloomberg, GitHub, and Crunchbase are all built on the RoR framework. According to this report, 3.3% of all websites we know use Ruby on Rails. 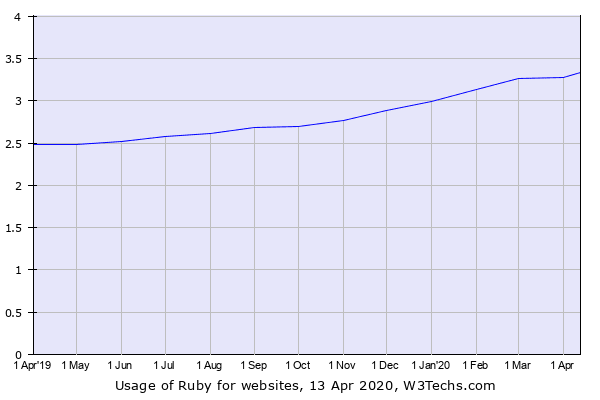 So what makes Ruby on Rails tick? I mean-

Why is Ruby on Rails the preferred choice among web developers?

Having close to half a decade’s experience in developing websites using RoR, we at SoluteLabs asked our own Ruby developers why they prefer the framework. Here are some snippets from our interview.

I am a relatively young team member here at SoluteLabs, but when talking about Ruby, I can go on for hours. 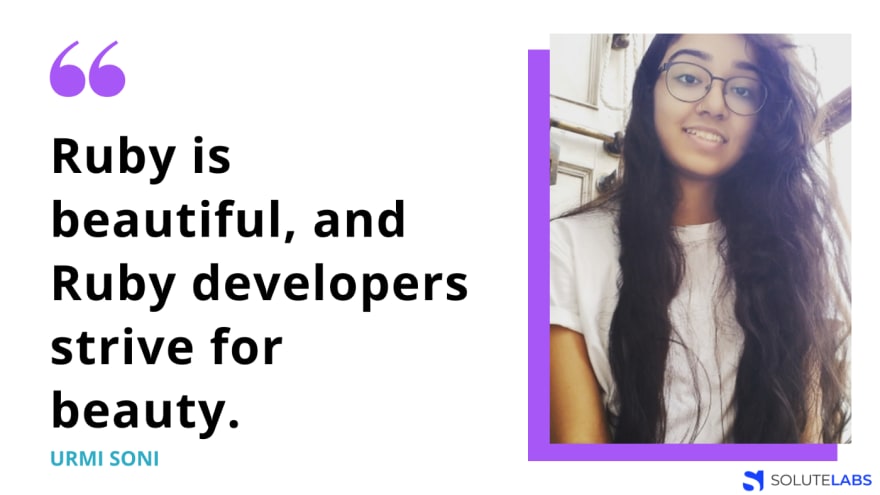 Ruby is a simple and beautiful language for development because it follows the convention over configuration principle. What this means is that wherever possible, we attempt to remove the need to configure things explicitly, and instead rely on defaults.

This makes adding components very easy. I also wonder how anyone can even think of using anything other than RoR for web development when Ruby supports all the functionalities like rapid development, RESTful app design, and the use of different libraries (gems).

The test automation feature of RoR helps in productive development. Maintaining good quality code is also easy throughout if we use RoR, due to its object-oriented nature.

It is Ruby on Rails for me, any day, anytime.

I have been working on Ruby on Rails ever since I joined SoluteLabs close to 2 years ago. RoR encourages fast development, which means we can write more code in less amount of time. 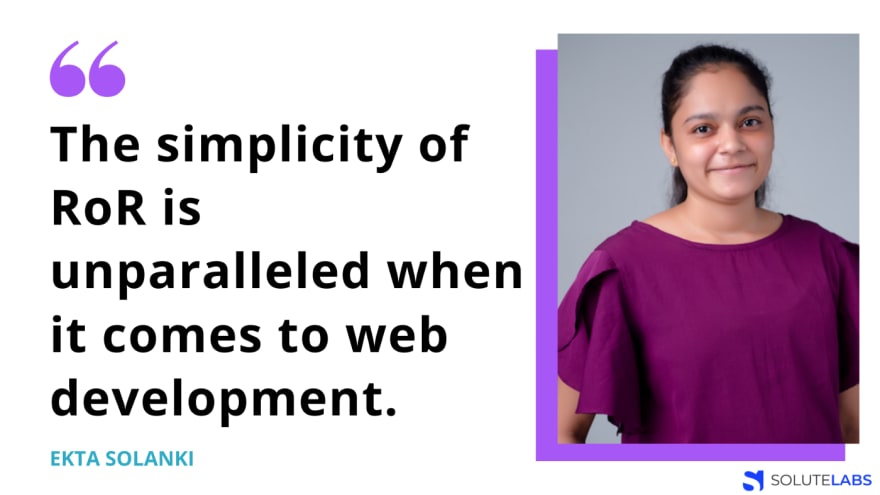 Since the framework is open-source, the library is huge, and all the knowledge you need is available free online. There is a tonne of tools that will also help in developing faster.

The architecture of RoR is convenient for us developers since it uses the MVC (Model -View- Controller) architecture. This means multiple developers can collaborate on a project and work together. MVC also means it is easier to debug the code since we have multiple levels properly written within the application.

Another big plus point I see with Ruby is that the Ruby code is easier to understand and is self-explanatory. This means that even if you have relatively inexperienced people coming on board, they can easily understand the code and be up and running in no time.

And lastly, Ruby code is easy to maintain, and there is a large community online that will support us in case of issues. RoR also allows scope for test automation, which is one of the biggest advantages.

In a nutshell, Ruby on Rails is a kick-ass framework that any developer will love with.

I am a relatively older Ruby on Rails developer here at SoluteLabs and can give you a much more holistic view of why we all love the framework.

First and foremost, Ruby on Rails has simple English-like syntax, which makes programming really easy to understand for developers. 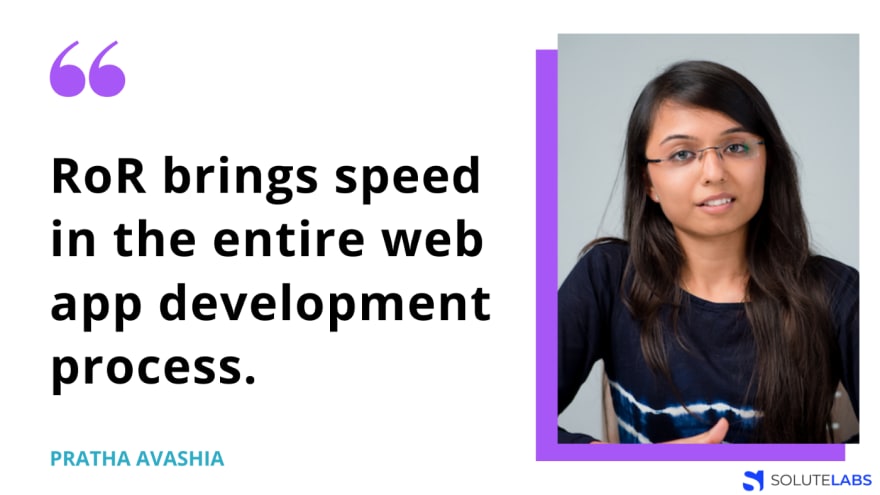 Convention over Configuration makes code much more organized. This means the number of decisions the programmer has to make and eliminates complexity.

Being open-source, RoR has a large group of developers and a big community online, which means you get responses to your queries on one of the many online forums.

Another often overseen feature of Rails is that it has a very strong focus on Testing. There are a lot of useful testing frameworks that help deliver quality products.

And lastly, no list of RoR advantages is complete without the mention of Ruby Gems. A gem is a module/ library that you can install and use in any project on your server. Ruby Gems help speed up the development process.

Ruby on Rails is very close to my heart since I started my software engineering career at SoluteLabs with an RoR project.

I have been using Ruby for close to 3 years now and can vouch for the fact that it is one of the easiest frameworks to master. 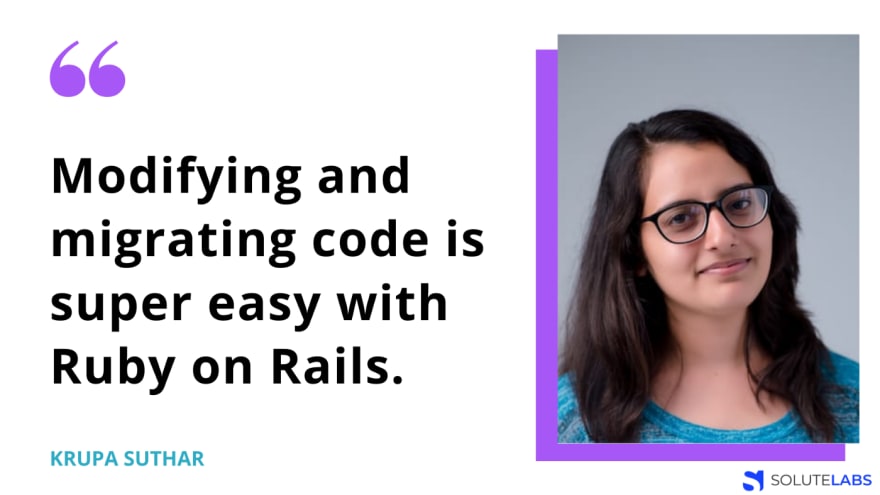 Many people have said it already, but I am also a big fan of Convention over Configuration, which makes Ruby very organized.

RoR has very rich testing frameworks and in-built gems such as unittest, rsspect, cucumber, which help in pushing out a quality product. In addition to these, we can also create custom gems, which make the lives of developers easier.

Another often stated advantage of RoR that I am repeating is the immense community support you get for the framework. Any question I have, I first go to the online forums which are frequented by some of the expert users of Ruby. I usually get my queries answered in under ten minutes.

A key advantage of Ruby on Rails is that it is easy to modify and migrate code. Migration allows you to define changes in your database schema, making it possible to use a version control system to keep things synchronized.

So ease of use, gems, migration, and a large community. I would say that these are the advantages of RoR off the top of my head, and the primary reason why I use the RoR framework for web development.

Ask Ajay, a backend engineer at SoluteLabs which his preferred framework is, and he will sing the famous Kaiser Chefs song — Ruby ruby ruby ruby.

I have used Java’s spring boot and Python’s Django framework for backend development, but nothing comes close to the ease and versatility of Ruby on Rails. 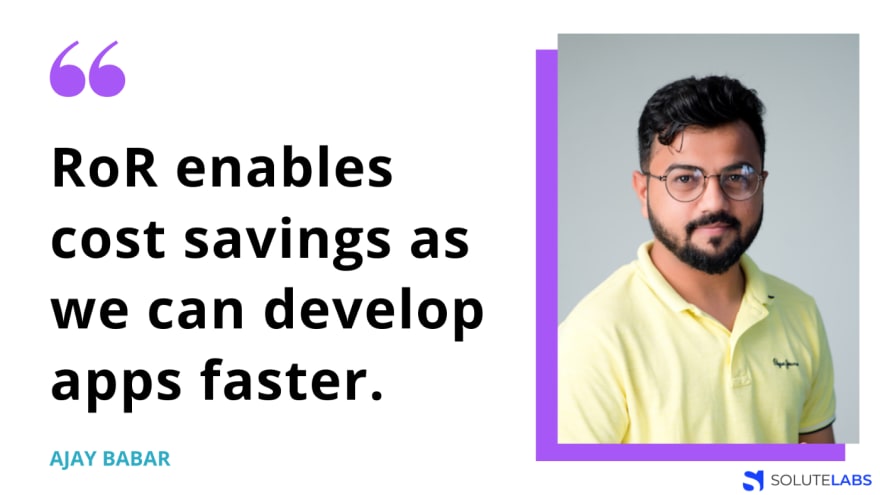 All of them use the Model -View- Controller framework (MVC), but what sets Ruby apart, as my friends have already told you is the conventions over configuration paradigm.

The effort and time that this paradigm saves for the developers are immense.
Another area where Ruby on Rails shines is the speedy development process. Rather than writing 5–6 classes to develop one API in other frameworks, with RoR, you can write a single API much faster, which leads to cost savings.

There is also the support of a huge developer community for Rails, which makes troubleshooting easier.

And lastly, Ruby as a language is really readable and easy to understand. That’s why IT giants like Shopify and Basecamp use Ruby on Rails framework.

Do you also love to code in RoR? Send us your reason for using Ruby on Rails for web development in the comments section below. If you get lucky, we might give you a super-shoutout to you on our social media platforms.