TL;DR: It's impossible. Give up now.

So you want to host Youtube videos on your site, ya? Well you're in luck. The web was invented for just this type of thing (not really). And Youtube makes it quite simple. All you need to do is hit that share button under a video, select embed, copy the HTML code, and voila; you have a Youtube video iframe ready to be embedded and shared on your site. Tim Berners-Lee would be proud. 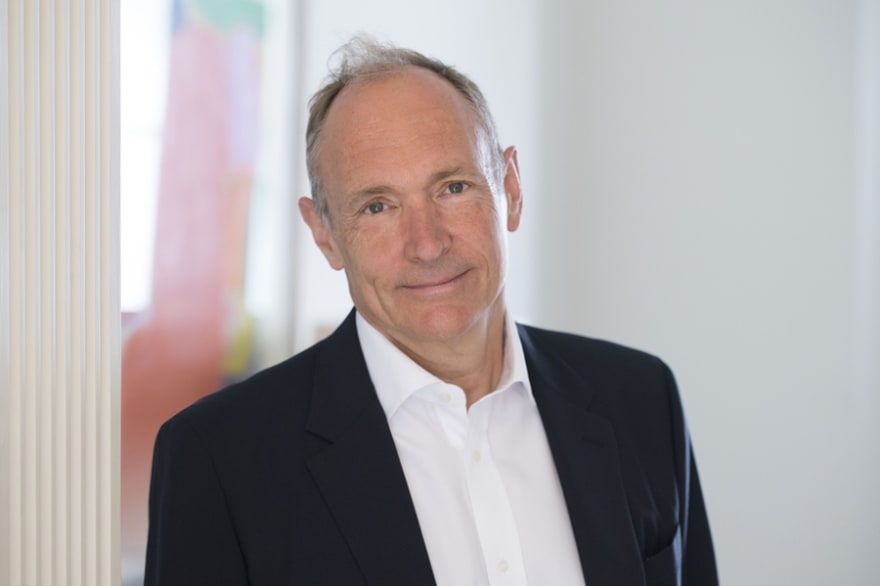 But wait, what's that? You want to enable playback in a floating window so that your users can continue using your app while watching videos? Well my friend this is where your luck runs dry. But don't fret, for I will be your guide on this ill-fated journey.

Where to begin? Well, we already have Youtube video in an iframe. Let's just plop that on a page.

Unfortunately, there's no pip button here in the video controls. I happen to know that if you right-click on the video you will get a context menu with the option to open the video in a picture-in-picture window. But you can't count on the user to discover that they need to right-click the video and select pip. Heck, we can barely count on them to find a pip button if it were right in front of their face.

Right-click the video again, but this time let's open up the inspector tool. See if you can find that pip button hiding somewhere in the HTML. Here's a hint, it's hiding next to the fullscreen button. If we toggle the display:none inline-style on the button we can get it to showup! 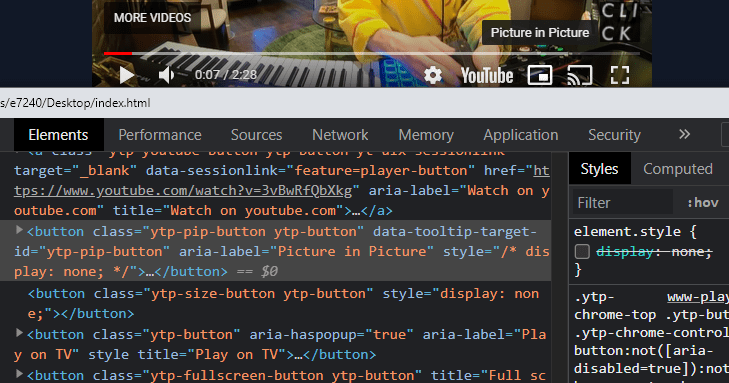 And since the button has a css-class-selector, we should easily be able to add a CSS rule to our page to show it.

But this doesn't work (I tried) for a couple of reasons. I'll discuss why later. For now, let's take a second look at our iframe element and pay close attention to its "allow" attribute.

One option we have is a popular library called Plyr that supports Youtube video embeds. They also support pip (picture-in-picture). Let's set it up and give it a go.

That didn't seem to work. I don't think we can count on this library to handle Youtube pip playback for us. Nor does there seem to be any other library on the web that can. But we won't be easily deterred. If no one else has done it, then we will just need to blaze the trail ourselves.

Here is the game plan. We know the pip button is hiding in the Youtube iframe embed next to the fullscreen button. If we could just get the button to show up somehow. Or maybe we can bypass the button altogether and open pip on command, in which case we could make our own button. 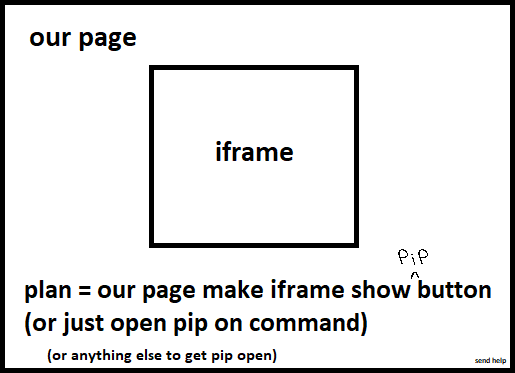 The first one talks about a right-click option to select pip, which we already know about. It also mentions something about it being impossible to trigger pip programmatically from outside the iframe embed due to, uh, same-origin policies. But we're gonna just ignore that for a second. Lastly mentioned is that HTML video elements come with a video.requestPictureInPicture() method. Although we aren't working directly with a video element, our iframe element has a video element inside of it. If we can somehow get a hold of it and...

Alright, what have we learned? Who cares, the point is that we won't be running any functions inside this pretty iframe of ours. Which is a shame because... wait a second, is it even our iframe? Technically it's Youtube's since we can't execute any code inside of it. So really we just invited Youtube to come and have a nice little seat on our webpage.

Perhaps there's some way we can style this thing. We tried to get the pip button to display using CSS but that didn't work. Actually we tried setting the CSS of our webpage, not the iframe. And since the iframe is a "separate" page we will need to set its CSS... somehow. We can't inject javascript to run code in the iframe, but surely CSS isn't a problem? I mean what're the most some style changes can do. Someone on Google has to have a solution for styling cross-domain iframes.

Gonna save some time here and just say the plan of injecting CSS is a BIG no-go. Same cross-domain scripting issue. To put it concretely, in order to access data between window frames, the frames need to have the same domain name, port, and protocol. It would be a field day for hackers otherwise. For instance, a site could coerce its users to log in to their bank in an iframe, and then once logged in, steal all the user's bank information from the frame. 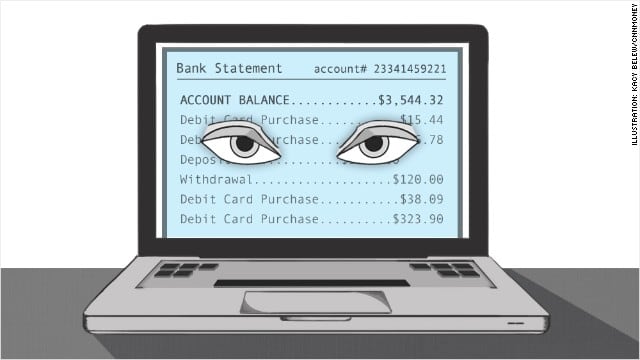 Here's a wild idea. The iframe isn't really ours, ya? Because we link it to youtube.com, ya? Once it's linked we can only send it messages with window.postMesssage. And messages require Youtube or the iframe to have message listeners to receive and execute our commands. And since Youtube doesn't care about any commands not laid out in their API docs we have no hope of opening pip this way. But what if.. what if we add our own message listener to the iframe before relinquishing ownership to Youtube. This way we can send a command to the iframe to find the video element and call requestPictureInPicture(). Alternatively, the message handler could just unhide the pip button, not really picky here.

I think you know how this ends up. The browser is not fooled by our naïve attempt at code injection. If we were really desperate, rather than trying to inject code into the iframe we could try and programmatically right-click the video, open the context menu, and select picture in picture for the user. But I'm sure there's a host of security issues preventing that too (sure because I tried).

Fear not, we haven't run out of options yet. The 3rd StackOverflow post in the list I compiled mentions loading Youtube videos directly into a video element tag. It does so by sending Google a request for a video's stream URL. Here's what the url looks like:

We can then set the src for our video element to this stream URL and call requestPictureInPicture(). 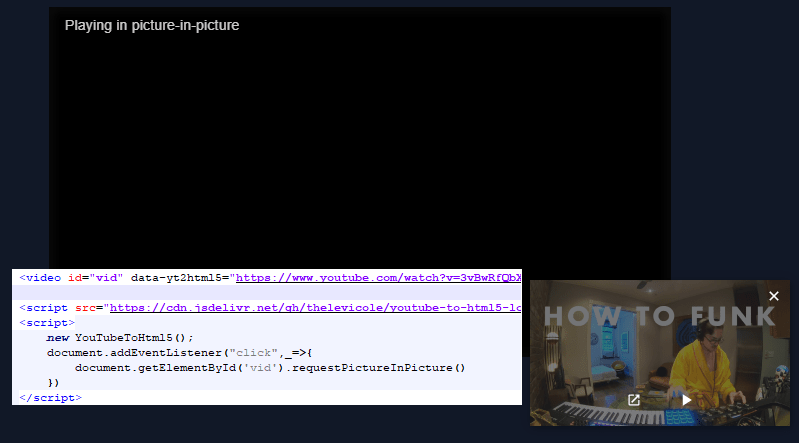 The author of the StackOverflow post wrote a package to retrieve the stream URL. But the package makes requests to a reverse proxy server (yt2html5.com) to retrieve the stream URL, which can't trust. It could suddenly start sending our user pornographic streams for all we know. So we will need to request the stream URL ourselves (using a server we setup). Alternatively, we could ask Google nicely for the raw video data and stream the video ourselves.

And it is at this point we say fuck Youtube and pip. Maybe we'll try again some other day.

Ima end this post here. I find it befitting that my first technical blog to teach absolutely nothing. Or at least accomplishes nothing. Join me next time, where we will explore the difficulties of retrieving the title/author of a Youtube video on the client-side (TL;DR: no need to sign up for a Google API key and setup a server, you can just call the undocumented YT.player.getVideoData method).

Once suspended, spankyed will not be able to comment or publish posts until their suspension is removed.

Once unsuspended, spankyed will be able to comment and publish posts again.

Once unpublished, all posts by spankyed will become hidden and only accessible to themselves.

If spankyed is not suspended, they can still re-publish their posts from their dashboard.

Once unpublished, this post will become invisible to the public and only accessible to Angel.

Thanks for keeping DEV Community 👩‍💻👨‍💻 safe. Here is what you can do to flag spankyed:

Unflagging spankyed will restore default visibility to their posts.