I’m part of Split’s frontend team, which manages a ≈300K line source base. As you might imagine, we have many feature flags active in our codebase at any given time. New flags are added regularly, and old ones are removed just as regularly.

Over the years, we have evolved how we add feature flags into our codebase. A lot of our focus has been on making it easy to add and remove these flags. Regardless of whether you’ve built your own in-house feature flagging system or use an enterprise-grade feature flagging platform like Split, the approach here can save you time and reduce the “cognitive load” of adding and removing flags.

We’ve made an analogous realization with feature flags, albeit at a higher level. Rather than “optimally” placing feature flag checks at individual lines of code, we wrap particular units (components, actions, reducers in our case) with things we call “togglers.” These togglers automatically pick the right unit to invoke based on the feature flag. The downside to this is that we end up with more code. But the upside is that our code is dramatically easier to reason about and modify.

How We Started Using Feature Flags

When we started off with adding feature flags to our codebase, we would add checks directly in the body of particular functions:

This is the straightforward way to do this and certainly the most efficient in terms of lines of code. This lets you hand-craft your use of feature flags in the optimal location, minimizing code duplication.

However, this leads to two problems:

Often, the person removing the flag is either not the person that put it in, or the person no longer remembers the fine details of the code. This inevitably makes the removal a cognitively challenging task.

This is even worse if multiple people have been modifying the code in the intervening time, and the code has suffered the inevitable “rotting” that results from different functionality jammed in on tight deadlines.

What seems like a simple “just remove the conditional” actually requires that you think through each logical flow (on both or all sides of the feature flag), identify orphaned variables, functions, classes, files, and so on. This often makes the process significantly more laborious.

Note : Interested in learning more about how to scale institutional knowledge across multiple teams? Check out our fireside chat with Transposit CTO and co-founder Tina Huang and Split CTO Pato Echagüe.

2. Flags increase the effort to reason about code modifications

When you modify code that has a feature flag in it, you need to be aware that the logic on each “side” of the feature flag can be substantially different. You must ask yourself something like: “So if I add this line here, how will it be affected by the multiple (sometimes quite different) flows that go through it?”

In theory, this is no different than any other branch in the code, but in practice, feature flags often carry a kind of logic change that isn’t “natural.” So, once you are using feature flags in your functions, It can become surprisingly laborious to maintain multiple features.

Like everyone using feature flags seriously in our codebase, we wondered how we could make this easier.

Our first step was to push the feature flags into our Redux store (which by itself is an interesting topic, but for another time). This let us start to decouple some of the “flagging” from the individual lines of code. For those of you not familiar with the React/Redux world, it means that we started to pull some of the mechanics of checking a flag out of the individual functions in our components, and put it in a central store that then gets “injected” into individual components.

You can see this isn’t a big step, but it did begin to “loosen up” our thinking about where the flags could be handled.

We Think About Feature Flags as Togglers

That loosening of our thinking allowed us to then make an important leap: If the heart of the flag was outside the body of code consuming it, why not pull the knowledge of the flag entirely out?

The natural place to start in a UI world is with a UI component since a UI component has a very clear boundary. Rather than the architecture being: You have a body of code with a flag evaluation in it: 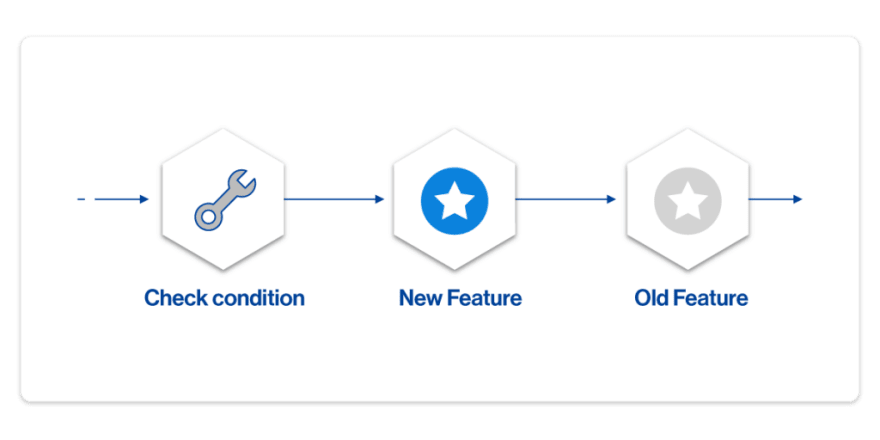 We switched the model to be: you have a flag evaluation with two (or more) versions of the code: 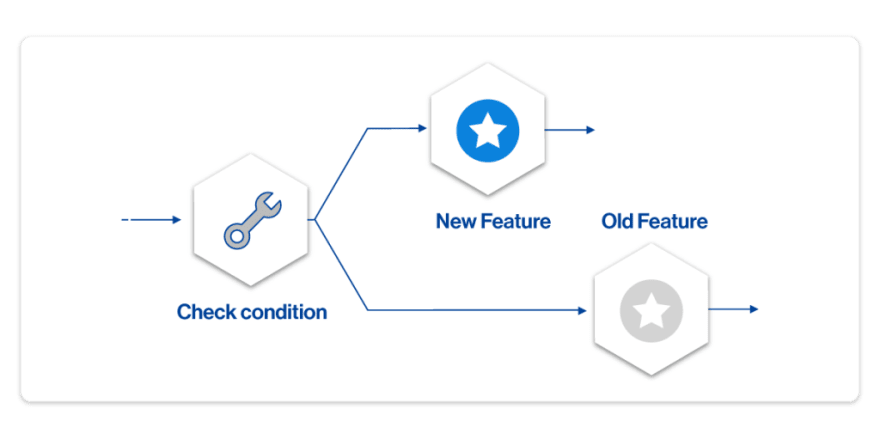 That is, we built a proxy that was only smart enough to know to evaluate a feature flag and then deliver flow of control to one of the variations.

We called these proxies “togglers” because they simply toggle between multiple versions of the same component.

Here is an example of what it looks like to use one of these:

You’ll note that you can’t tell the toggler is there!

Can this Pattern Benefit Your Feature Flag Implementation?

This pattern is not confined to UI components. For example, in a language like Java, you could use an aspect-oriented programming (AOP) pattern to build similar togglers outside of individual classes.

Before you implement it for yourself, let’s talk about some of the pros and cons from what we’ve observed.

Pros of the Toggler Approach

By wrapping the core entities of the system with togglers we reap several benefits:

Cons of the Toggler Approach

This approach does come with some tradeoffs, mostly in very specific situations:

This Feature Flag Implementation Pattern Can Work For You Too

What we’ve talked about here is the idea of moving the application of your feature flags to the boundaries of logical units of code (components, classes, actions, etc) rather than at individual lines of code. The benefits of this are that it makes it significantly easier to reason about your code, easier to add and (importantly) remove the feature flags.

While a primary reason for using feature flags is to be able to measure the adoption of new features so that your company can make better business decisions, another purpose is to improve development velocity while reducing release risk. It is almost a truism that reduced conceptual complexity of your code is going to improve development velocity (less time thinking about adding logic, less time testing it, less time reviewing it), and improving the mechanics of adding and removing flags is also going to improve velocity.

All of the benefits are why we have adopted this pattern so extensively in our codebase, and why you should consider adopting a pattern like this in your own codebase. Let us know what your own experience with this is!

Check out these resources from our team to learn more about how to confidently release features as fast as your team can develop them;

What is "Good" Code