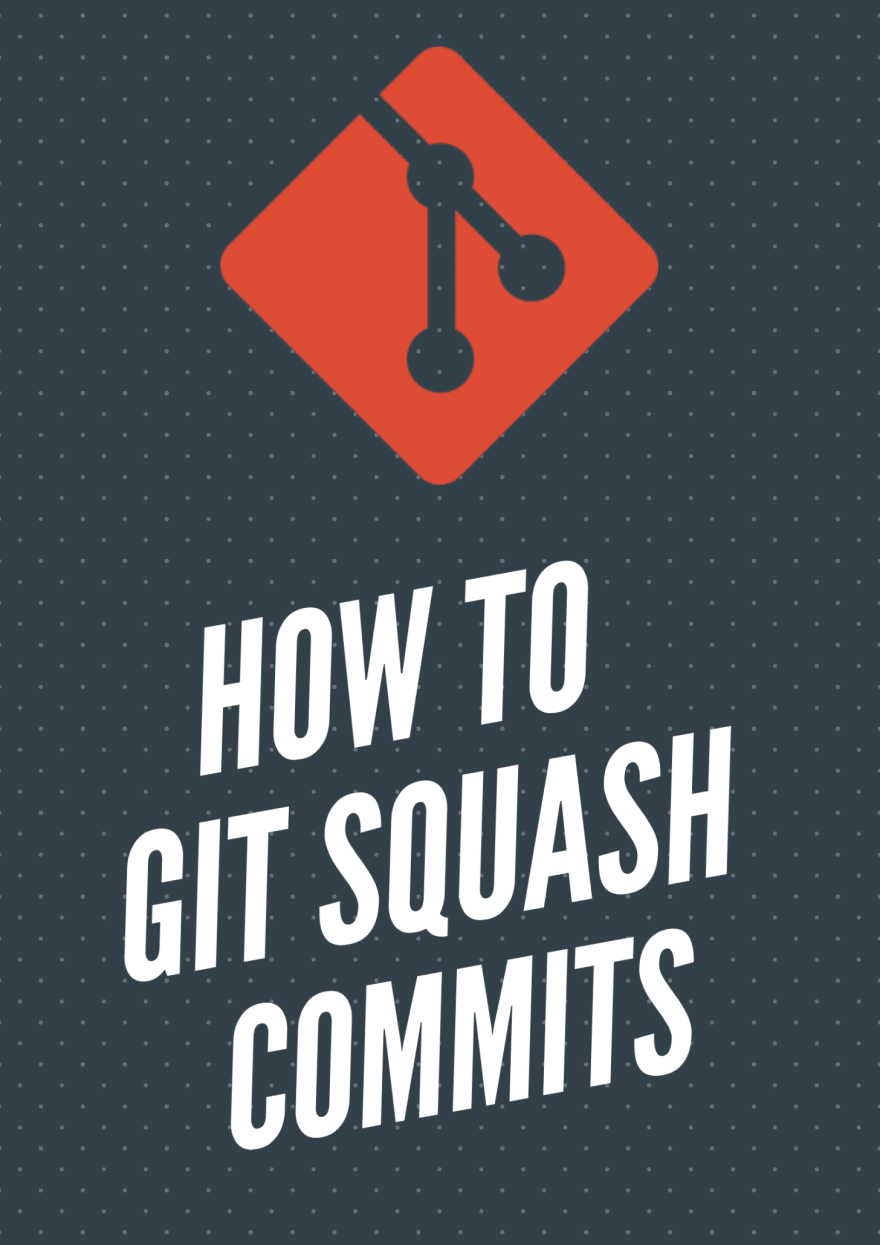 Before learning how to squash commits let’s see what is git squash first.

Git squash is a technique that helps you to take a series of commits and condense it to a few commits.

For example, assume that you have a series of n commits. By squashing you can make all the n-commits to a single commit.

Squashing is mainly used to condense a large number of commits to make it to a small number of meaningful commits. So that we can make the git history clearer.

It is also used while merging branches. Most people will advise you to always squash the commits and rebase it with the parent branch (like master or develop).

So when you are squashing and rebasing with the parent branch, the history of the main branch will be very clean and will have only meaningful commits.

How to do git squash

It’s good to have it as a single commit that explains that the new file has been added with some content. So let’s see how to squash the last three commits to a single commit.

git rebase -i is an interactive tool that helps you to squash commits. And it comes up with various options. But let’s discuss only git squash.

Don’t worry if you are not very comfortable with git-rebase. Squashing commit is a very simple technique to achieve with interactive git-rebase (i.e) git rebase -i

HEAD~3 explains that we are taking the last three commits. 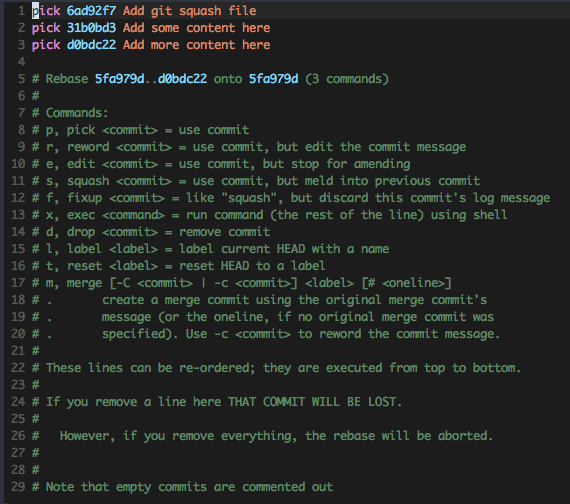 The interactive rebase will open up the editor. And you can see how rebase -i has taken the last three commits. And note the number of options that it has.

Let’s concentrate only on squash.

As mentioned earlier, let’s make it to a single commit.

You can see that we have marked the last two commits to squash. You can use squash or s to mark the commit to squash.

In the above example, the squashed commits will be merged to the main commit (i.e) the commit marked as the pick.

After marking the commits you can save the editor.

After saving the editor, rebase -i will open another editor to enter the commit message like the below image. 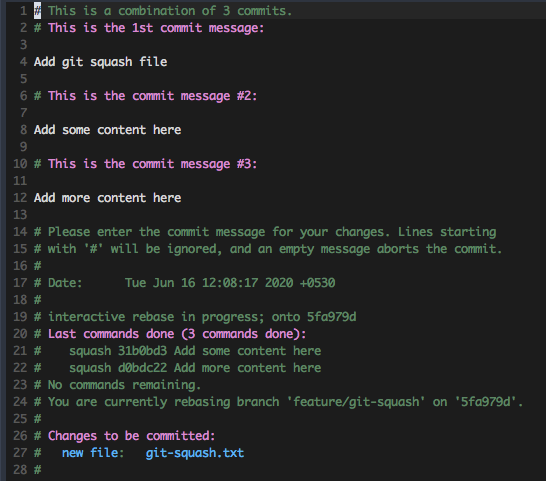 After editing your commit message you can save this editor. Note that the line starting with # will be ignored.

I have edited the commit message and also note that we have squashed those three commits to a single commit.

And note that the commit hash has also changed. git rebase will always create a new commit with respective changes.

Remember that squashing will change the git history. So if you have already pushed the branch to remote then it is not advisable to squash.

Always squash before you push the changes to remote.

Using the fixup option to squash

The git history is as follows

Note that the Git has taken the main commit message and squashed the other two commits into it. And also note that the commit hash has been changed too.

Using squash when merging the branch

Git also provides the option to squash when you are merging a branch. This is a very useful command and comes in handy very much.

Most of us will be working in branches. We will be checking out branches to build a new feature or to fix some quick bugs.

So when we are ready to merge those changes to the main branch (master or develop) then squashing those changes will make more sense.

So consider the below command

This command will take all the commits from the target branch, squash them, and stage all changes in the current branch. Then you can commit all the changes in a single commit. 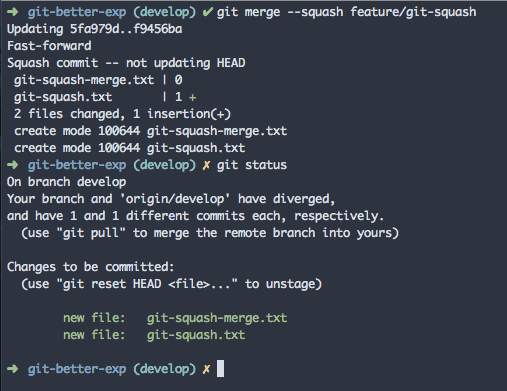 You can see that we are merging a branch to develop with —squash option. Git will take all the changes and have staged those changes.

Github also provides the option to squash commits. This is also a very helpful feature that comes in handy when you are merging a pull request. 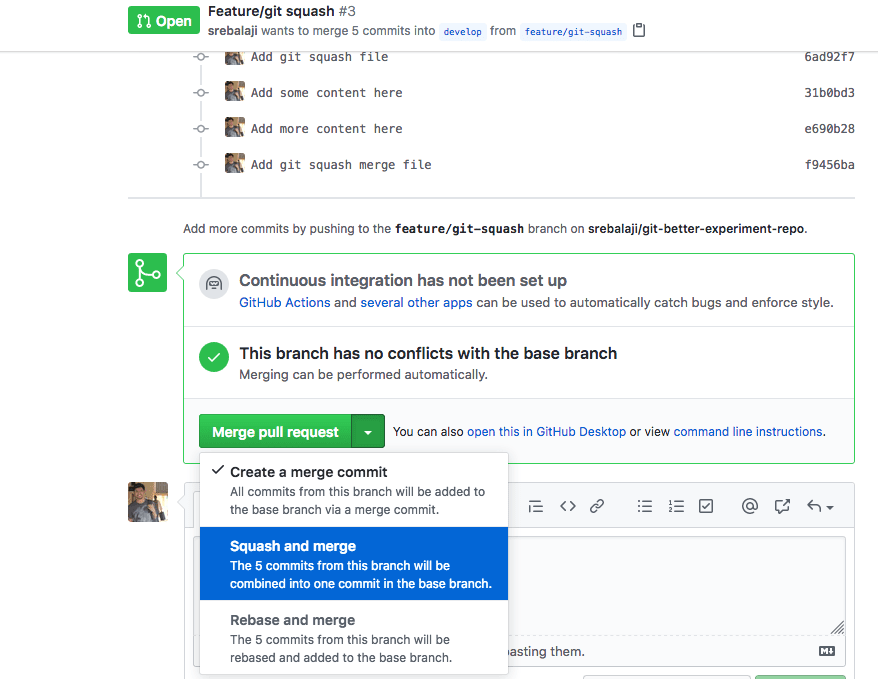 You can squash and merge the changes. So that all the five commits will be condensed to a single commit.

You can see that a single commit is made with a relevant commit message.

I hope you learned something :)

If you have come this much, then I think you are much interested in Git. You can subscribe to my newsletter GitBetter to get tricks, tips, and advanced topics of Git.

Once suspended, srebalaji will not be able to comment or publish posts until their suspension is removed.

Once unsuspended, srebalaji will be able to comment and publish posts again.

Once unpublished, all posts by srebalaji will become hidden and only accessible to themselves.

If srebalaji is not suspended, they can still re-publish their posts from their dashboard.

Once unpublished, this post will become invisible to the public and only accessible to Srebalaji Thirumalai.

Thanks for keeping DEV Community 👩‍💻👨‍💻 safe. Here is what you can do to flag srebalaji:

Unflagging srebalaji will restore default visibility to their posts.