DEV Community is a community of 786,656 amazing developers

Let’s talk about GitHub contributions and rethink them a bit. I want to start with questioning the foundation: what if we could contribute to a project without having to create a pull request? Imagine all we have to do is to create a GitHub issue. Yes, you can do that with GitHub Actions and the new GitHub Issue Forms. Let’s get to it!

What are GitHub Issue Forms?

GitHub Issue Forms are a new feature (currently in public beta). Historically, repository maintainers used issue templates to semi-enforce a structure within a free text field, but this barely did the job. Too often people just deleted sections or didn’t fill them out.

Now, with Issue Forms, gathering information is significantly more effective. A form is described in YAML.

The following input types are supported: textarea, input, dropdown and checkboxes. We can even mark certain inputs as required. The rendered issue template looks like this: 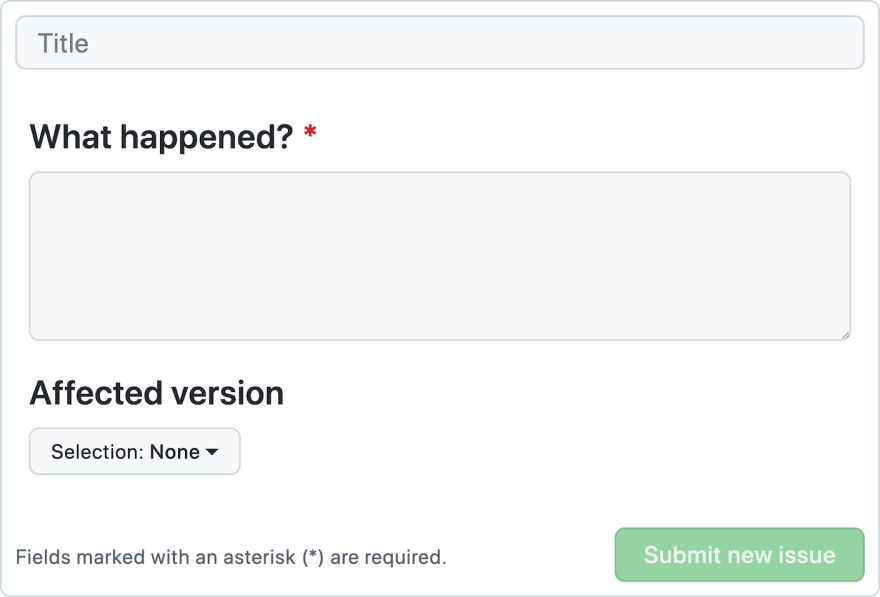 Let us take things up a notch, and see how we can use the power of Issue Forms to go beyond filing bug reports and feature requests.

We learned that issues created through Issue Forms have a predictable structure. This enables all sorts of great automation. To simplify integrating with contents of Issue Forms, I wrote the GitHub Issue Parser Action that parses the issue body and outputs the content in a JSON format. Issues created using the Issue Form from above will create such a JSON output:

From here we can do whatever we want with the data. For example, we could insert this bug report in a database, or make a commit to the same or another repository. It helps to think about GitHub Actions as compute that run GitHub's infrastructure triggered by events like issue:opened; only your imagination is the limit.

I maintain a list of awesome browser extensions for GitHub. Every now and then I get a pull request to add a new extension to the list. Dealing with the pull request is sometimes a bit of a pain for both the contributor and me. Especially when the contribution guidelines are not met. Applying what we have learned with Issue Forms, we can simplify this process to one simple step.

Rather than having people to fork, pull, commit and create a pull request, they now can just create an issue using the "Submit extension" Issue Form. This form will require a bunch of information about the extension such as name, description, links, etc. As a last step the user clicks submit and the issue is created, waiting to be accepted.

A "merge" can be instantiated by applying the merge label. This will trigger a GitHub Workflow that will convert the issue into a code contribution. 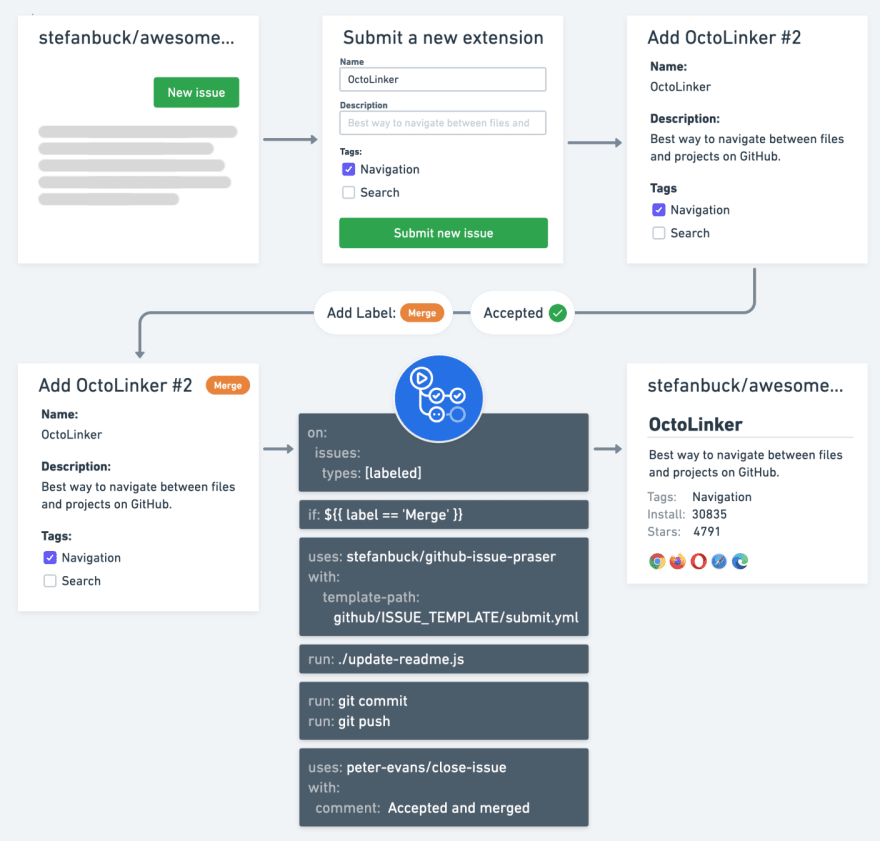 Let's break down the steps:

I call this a "codeless contribution". As promised early it allows contributions to a project without having to create a pull request!

If you ever wanted to order a pizza through GitHub, now's your chance. After the order has been placed, a GitHub Action picks up the issue, does the parsing using GitHub Issue Parser, some validation, and then creates a new commit with the order by updating the readme. Give it a try and see how it works.

Gregor Martynus aka gr2m is using GitHub Issue Parser, to prepare his show helpdesk where he is answering all your GitHub API/automation questions live on Twitch.

At the time of writing, Issue Forms do not support any custom validation. However, using GitHub Issue Parser enables you to add any kind of validation by processing the issue on the issue:opened event.

Stefan Buck
Hello there! I'm Stefan 👋, you may know me for Octolinker, a browser extension for GitHub focused on code navigation. I'm passionate about building tools that automate mundane tasks.
What bug reporting tool to choose?
#qa #tools #productivity #testing
The Rise of Browser Os
#webdev #discuss #programming #javascript
1 year into DevRel, here is what I learned
#devrel #career #motivation