Curiosity and Intuition are two of a Data Scientist’s most powerful tools. The third one may be Pandas.

On my previous article I showed you how to:

To do this, we used Python’s Pandas framework on a Jupyter Notebook for Data analysis and processing, and the Seaborn Framework for visuals.

On the previous article, as on this one, we used the 120 years of Olympics Dataset from Kaggle. We looked at female participation over time, athletes’ weights’ and heights’ distributions, and other variables.

However, we did look into the data about which sport each athlete practiced.

This time, we will focus on the Sport column of the Dataset, and glean some insights about it through statistical data analysis.

A few questions I can think of are:

Same as before, we’ll be using this Github project for the analysis, and you can fork it and add your own analysis and insights.

For our first analysis, we’ll look at what sports have the heaviest and tallest players, and which have the lightest or shortest.

As we saw on the previous article, both height and weight are heavily dependent on sex, and we have more data on the male athletes than the female ones. So we’ll do this analysis on the male ones, but the same code would work for either by just switching the ‘Sex’ filter.

As you can see, if I group by sport I can take the min, max and average weight and height for each sport’s players.

I then looked at the top 5 heaviest sports, and found this (in kilograms):

Then I just plotted the mean weight for each sport, and found that it had a pretty normal distribution: 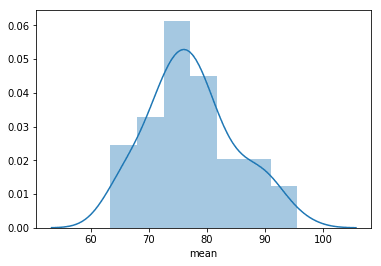 The height has a similar, normal distribution, but its variance is a lot smaller, being highly concentrated in the mean: 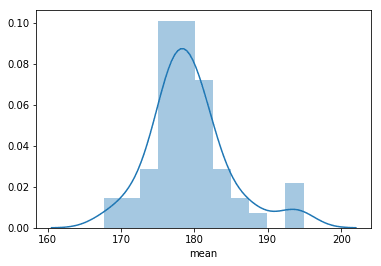 Next I set out to graph all individual means, in an ordered scatter plot, to see whether there were any outliers. 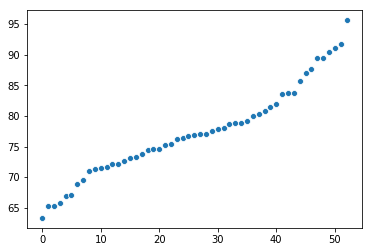 In fact, the ‘heaviest’ sport is quite the outlier with respect to the rest of the graph, and the same happens with the ‘lightest’. If we look at heights, even though variance was clearly smaller, the plot reveals an even bigger difference between ‘outliers’ and people near the mean, accentuated by the fact that most people do not really deviate a lot from it. 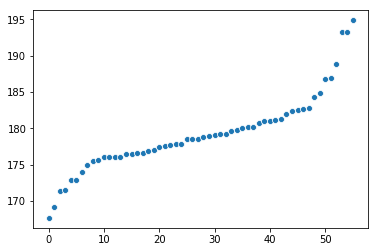 For the lightest sports, the results can be obtained using the previously generated variable, plot_data.

The results (omitting the heaviest ones, since we already saw those) are the following:

So Gymnastics athletes, even the male ones, are by far the lightest players! They are followed quite closely by Ski Jumping, Boxing (which kinda surprised me) and Trampolining, which actually makes a lot of sense.

If we instead look for the tallest and shortest athletes, the results will be a little less surprising. I’m guessing we all expected the same sport to come up on top and, unsurprisingly, it did. At least we can now say it’s not a stereotype.

So we see Gymnastics practitioners are very light, and very short. But some sports in these rankings do not appear in the weight ones. I wonder what ‘build’ (weight/height) each sport has?

The plot has a pretty linear look, until we get to the top where most outliers fall:

And here are the least and most heavily built sports:

So again Rugby and Tug of War are the most heavily built sports, and this time Alpine skiing comes up as the least one, with Archery and Art Competitions (which I just learned is an Olympics Sport and will require further research) following close by.

Now we’ve done all the interesting things I could think of with those three columns, I’d like to start looking at the time variable. Specifically the year. I want to see whether new sports have been introduced to the Olympics, and when. But also which have been deprecated.

This code will be generally useful any time we need to see when something arose for the first time, especially if we want to see an abnormal increase in a variable. 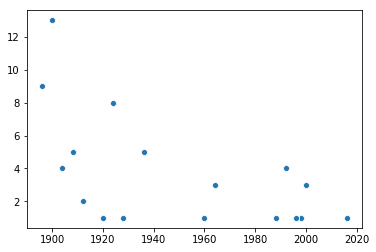 So even though a lot of sports where there before 1910, and most where introduced before 1920, there have been many relatively new introductions. Looking at the data, I see there were many new sports introduced in 1936, and afterwards they were always brought in small (less than five sports) sets.

There weren’t any new sports between 1936 and 1960, when Biathlon was introduced, and then they kept adding them pretty regularly:

An analogous analysis for deprecated sports (where max year is not recent) shows this list of sports, most of which I’ve never heard of (though that’s by no means a good metric of whether a sport is popular!).

We see Art Competitions were dropped in 1948, Polo hasn’t been practiced olympically since 1936, and the same goes for Aeronautics. If anyone knows what exactly is Aeronautics, please let me know, I’m picturing people in a plane but don’t see what the competition could be like. Maybe plane races? Let’s bring those back!

That’s all for today, folks! I hope you’ve enjoyed this Data Analysis tutorial, and maybe you’ve got a new interesting fact to bring up in your next family dinner.

As usual, feel free to fork the code from this analysis and add your own insights. As a follow up, I’m thinking of training a small Machine Learning model to predict an athlete’s sex based on the sport, weight and height columns, tell me what model you’d use!

And if you feel anything in this article was not properly explained, or is simply wrong, please also let me know, as I’m learning from these as well!

If you wish to go deeper into Data Analysis with Python, I highly recommend this O’Reilly book.

The post Data Analysis: Pandas and Seaborn on a Kaggle Dataset appeared first on Data Stuff.

Thanks for keeping DEV Community 👩‍💻👨‍💻 safe. Here is what you can do to flag strikingloo: