Here, we are sharing our experience producing the series, challenges we faced, and how we’re working on making developer video production more scalable. By the end of this post, you’ll learn how we made 63 videos across nine topics and seven languages in less than half the usual time.

What did we set out to do?

Stripe has seven main client libraries — Ruby, PHP, Python, Node, .NET, Go, and Java — and we aim to provide junior developers a foundation of broadly applicable knowledge to help them in all of their Stripe development going forward.

The developer advocacy team at Stripe is small but mighty, and this project called for contributions from all across the company. For every video, we had:

Typically a video takes us 10-20 hours of work. We estimate that each of these videos took less than 6 hours to make.

Screenflow is a lightweight tool for screen recording and video editing that we use regularly at Stripe. All of our developer advocates used it for screen, camera, and audio capture, as well as for creating animations. While it has worked well for our current video needs across the team, it is worth noting that Screenflow does not support livestreaming.

Figma is a collaborative graphic design tool that allowed us to quickly create and share design assets, such as thumbnails for each video.

While the battle between Google Docs and Dropbox Paper rages on, we drafted scripts in Dropbox Paper so that we could collaborate and include formatted code-snippets.

With such a small team, we ran into a number of expected and unexpected challenges, some common to video production, some specific to the quirks of working in the financial field.

Walkthrough of our process

In the recording booth*

*Since our entire team was remote even pre-COVID, we don’t have an actual recording booth, but you can learn more about what equipment we use here. 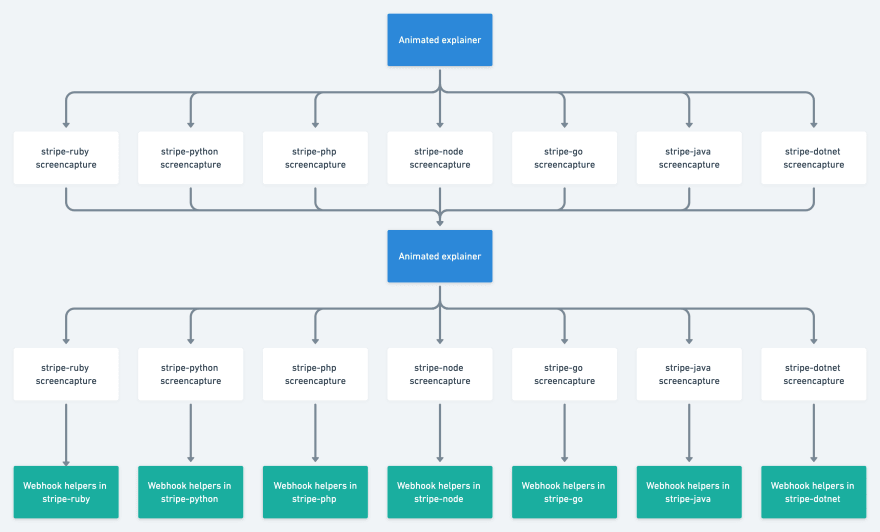 Our end result was that we only needed to do the heavy lifting of animation once to produce 7 consistent videos covering a topic and were able to cover a 9 x 7 matrix of topics and languages across just 5 team members.

Marketing
We’re not done yet! Once we made all the videos, we needed to make sure they got in front of the right people.

Conclusion
Overall, we were able to create 63 videos across nine topics in seven languages in less than 400 hours, which is a reduction of over 60% from the ~1000 hours this project would have normally taken. This definitely required the collaboration of a number of teammates across the company, all in different functions, but we all have the same goal of improving the Stripe developer experience. You can check out the videos here.

Are you just getting started or trying to do something similar with video content? We’d love to any questions or comments from you below or on Twitter.

CJ Avilla is a developer advocate at Stripe and lives in Nevada. You can find him on Twitter at @cjav_dev or on YouTube.

How to mock AWS SDK with Jest

Stripe Payment with Flutter and Appwrite

Stay updated with Stripe Developer News. Be the first to hear about product updates and developer resources.

Get updates
Introduction to the Stripe CLI and the Stripe for VS Code extension
#stripe #tutorial #webdev #cli
Modeling your SaaS business with Products and Prices
#stripe #payment #saas #tutorial
🍔 Single Slider: Direct Charges on Multiple Accounts with Cloning
#stripe

Once suspended, stripe will not be able to comment or publish posts until their suspension is removed.

Once unsuspended, stripe will be able to comment and publish posts again.

Once unpublished, all posts by stripe will become hidden and only accessible to themselves.

If stripe is not suspended, they can still re-publish their posts from their dashboard.

Once unpublished, this post will become invisible to the public and only accessible to CJ Avilla.

Thanks for keeping DEV Community safe. Here is what you can do to flag stripe:

Unflagging stripe will restore default visibility to their posts.