Want to share and collaborate on internal npm modules from your Git repositories during development? Without having to:

Setting up CI/CD for every feature branch just to be able to share internal packages in development is not ideal. And manual updates and coordination of versions and dependencies for each commit you want to test is not very ergonomic etiher.

Use an easier alternative, by connecting your Git repos to Bytesafe instead. Developers can install a module from Bytesafe, and the appropriate version will be packaged from the Git repository.

And by pulling both private and public npm dependencies from Bytesafe, teams can use one central source and benefit from Bytesafe plugins and policies (that can also be applied on modules sourced from Git repositories).

Upstreams are linked registries that are used both as a source and destination for packages for your private registry.
When using a Git repository upstream, teams can access internal npm modules in a way that is completely transparent to developers. Without the need for developers to configure anything special, npm modules are easily accessible for your team members' project, with the tools they regularly use. 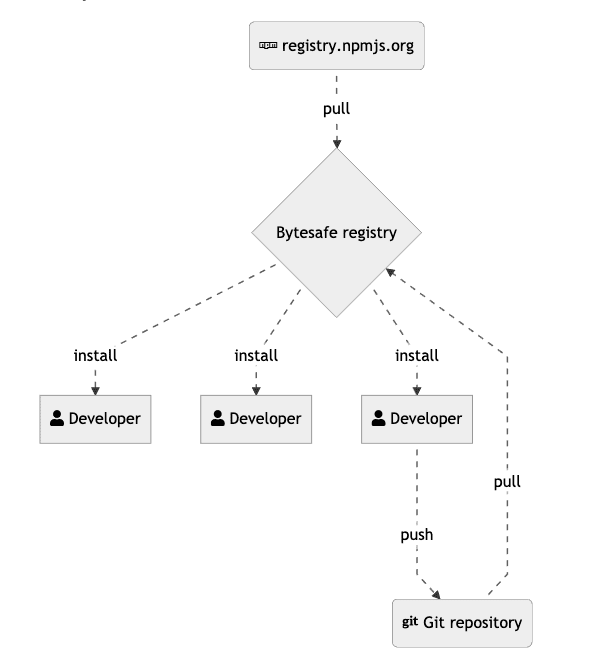 Using a Git repository as one of the upstreams for a registry. Changes pushed to Git are directly available to be fetched by other team members from Bytesafe(using their regular npm / yarn / pnpm tooling), together with public packages (sourced from registry.npmjs.org).

You can add Git repositories as upstreams to a Bytesafe registry in one of two ways:

Private and public
Both public and private Git repositories can be added as upstreams. The Github integration makes it easy to use private repos without needing to manage tokens.

Don't compromise on usability just because the source is a Git repository. Include the Git repository into your Bytesafe workflow instead!

Interested? Head over to Bytesafe to try it for yourself.