We all know that CSS positioning can be confusing sometimes. When you design a layout, you think about how you position your elements and the surrounding elements. However, there are few ways to design your web layouts, and CSS position property is one of the options.

Let's take a simple analogy and go through the CSS position property.

Before going into details, let's see how these elements automatically get their position on your page. To understand this, you need to understand the normal flow of the web page. Normal flow is how the elements are arranged on a page if you haven't changed their layout.

There are two types of elements on a web page. Block-level element and inline elements.

Inline elements such as <a>, <img>, <span> don't form their own blocks. Instead, they are displayed within lines. They line up next to one another horizontally; when there isn't enough space left on the line, the content moves to a new line.

Now let's see how we can change and manipulate these positions in CSS.

CSS has a property called position that helps us change and move the items we want. There are 5 values in this position property.

Let's see some simple examples to understand each of these properties.

The static position is the default or "normal" positioning. So, for example, if we take the backpack packed without carefully arranging it, the items inside take a default position.

On a web page, if you have 3 elements added to the page with static positioning, It will take the normal flow of the page. So any changes to the top, right, bottom, left, or z-index properties won’t make any difference.

Let's add some items into your backpack and see how it would look like with static positioning. 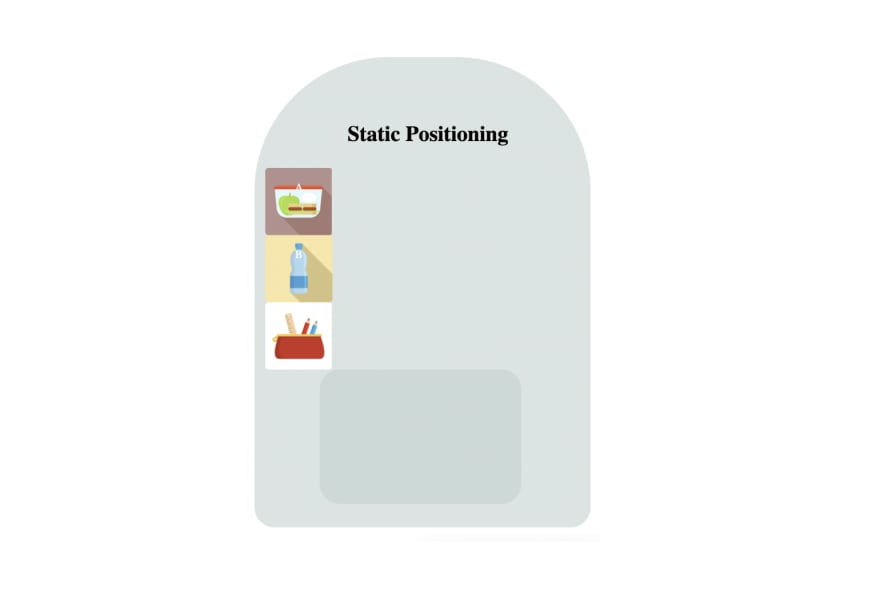 In the above picture, you can see that items in the backpack are arranged one after another. This is because each item's position value has been set as static which is the default value. It is automatically arranged according to the normal flow.

Let's move on to relative positioning.

When you move the bottle next to the lunchbox, the position it originally occupied is blank because the pencil case has not taken that place just because you moved the bottle.

In relative positioning, when you change the position, the original space of the specific element will not remove from the normal flow.

If you look at the below picture, you will see that the bottle has moved next to the lunch box, but the original space remains blank because it will not get removed from the normal flow. 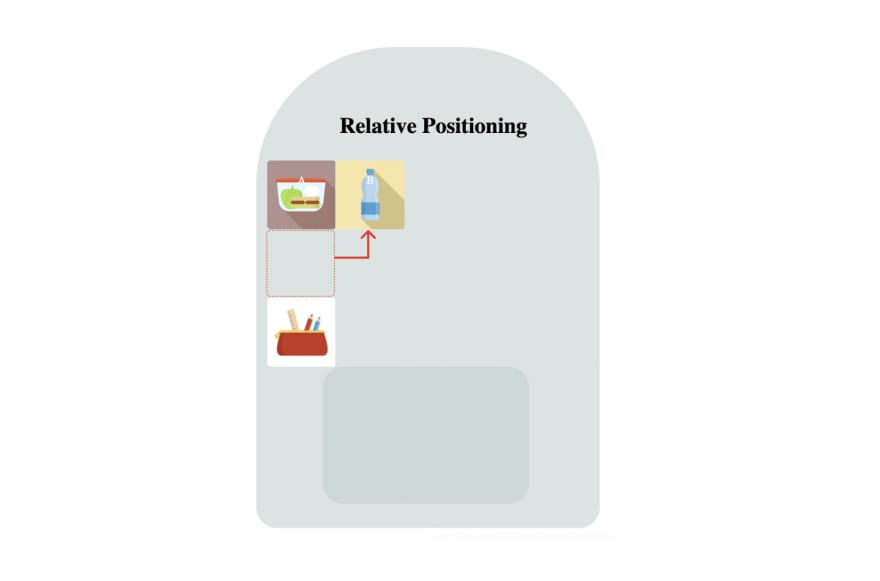 Now, this is a tricky position to explain with our example. Let's say that you want to put your water bottle inside the pocket of the backpack. If so, this pocket should have a relative or any other position, other than static position, already assigned to it. So we can place it inside the pocket in an exact position. And this position is decided relative to the pocket.

If the pocket doesn't have any position assigned to it other than static, and if there are no other nearest items or places assigned with a non-static position, it will move to the top right corner of the backpack. That means it will position itself relative to the backpack; then, you can assign an absolute position based on where you want to place it.

When you assigned an absolute position to an element, it removes from the normal flow, the space that the element was originally occupying is no longer there.

Check the below picture. Now your water bottle has an absolute position inside the pocket. Also, the pencil case has moved to your bottle's original space. 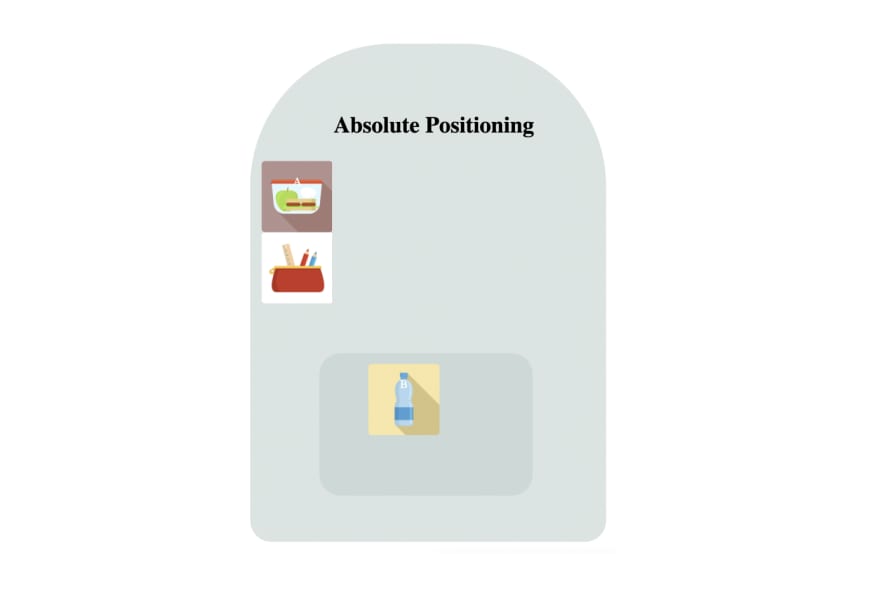 Fixed positioning is like placing your items where ever you want, regardless of whether there are items in that place or not. So, for example, let's say that you moved your bottle to the right side as in the picture below; if there is another book there, you can still place it over there and decide whether you want it on top of the other item, or under it.

When you assigned a fixed position to your element, it removes from the normal flow as well. And it is positioned relative to the viewport. So when you scroll the page, the element remains in the original location of the page.

This is also a tricky position to explain with this example. Now again, I have to scroll your backpack and treat it as a flat surface to explain this 😄

Did you notice how it sticks on top of the backpack when it moves?

Alright, I hope you understand the different values in position property and how those behave.

There's one more concept that you need to understand when you are working with positioning. That is z-index. Let's see what it is all about.

This is where the Z-index property comes in. When you have elements overlapping, we use Z-index to stack them.

Let's say that you have a pile of books that you need to stack. So you give each a number and stack one by one. The highest number is on the top, and the lowest number is at the bottom of the pile. 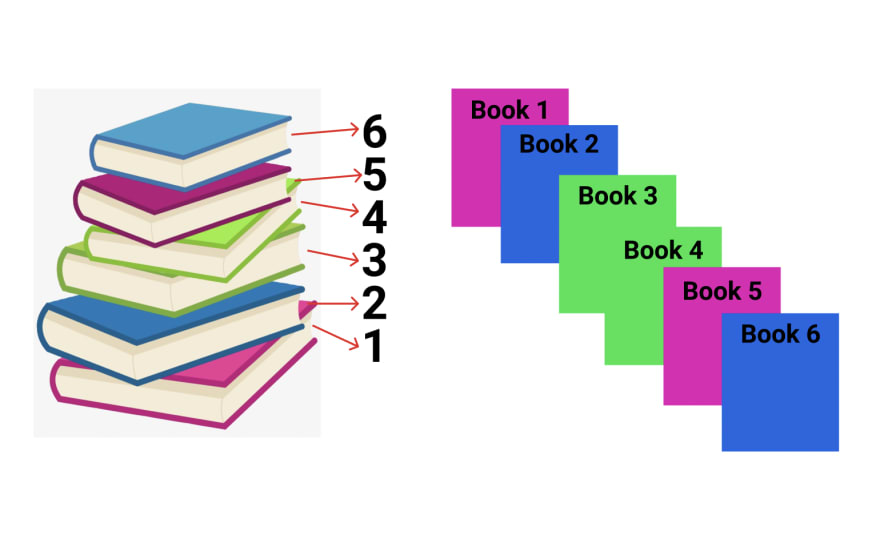 Z-index helps you to stack the elements the same way we stack these books. Any element that has a position value other than the static position can use the z-index property. 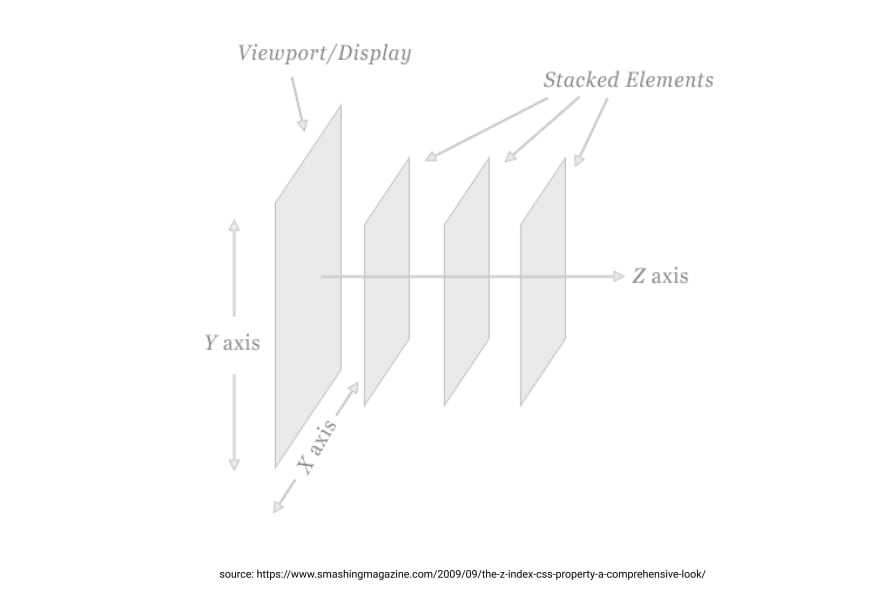 The z-index gives you the ability to decide how the elements should overlap each other, in which order. If you give a higher z-index value, that particular element will appear closer to the viewer. In other words, it will appear on top of the other elements.

So now we have learned everything about CSS positioning. I hope this helped you to understand these concepts in a better way. Don't forget to share your feedback; I would love to hear your thoughts 😊

What is an NFT?

Once suspended, sumusiriwardana will not be able to comment or publish posts until their suspension is removed.

Once unsuspended, sumusiriwardana will be able to comment and publish posts again.

Once unpublished, all posts by sumusiriwardana will become hidden and only accessible to themselves.

If sumusiriwardana is not suspended, they can still re-publish their posts from their dashboard.

Once unpublished, this post will become invisible to the public and only accessible to Sumudu Siriwardana.

Thanks for keeping DEV Community 👩‍💻👨‍💻 safe. Here is what you can do to flag sumusiriwardana:

Unflagging sumusiriwardana will restore default visibility to their posts.