This article was originally published on Dasha.

In case you are wondering, Dasha is a conversational-AI-as-a-service platform that lets you embed realistic voice and text conversational capabilities into your apps or products. Start building for free!

Do you find yourself looking up the difference between slice() and splice() methods all the time?

The two methods are among the most used array methods when it comes to adding, updating, or removing items in an array, and cloning an array or copying a portion of an array. ​

Slice() and splice() methods look similar, and they sound similar, so it's very easy to get confused and remember which is which. I've put together this guide on these two methods so that you can slice and splice JavaScrips arrays like a pro. 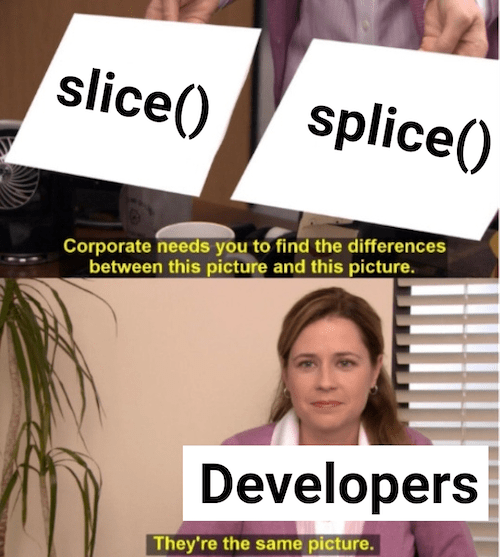 This method takes two optional arguments. The first argument is the startIndex, and the second is the endIndex. If you do not pass any arguments, the entire original array will be copied by default. Also, If the arguments you pass are greater than the actual array, it will return an empty array.

Let's slice an array with no arguments:

In the above example, since there are no arguments, it has returned a copy of the entire array.

One important thing to note here is that these two arrays are not equal! They are two separate arrays containing the same values inside them. So if you check their equality as in the example, it will return false.

Now let's check how we can slice an array with a single argument.

When you pass a single argument to the slice() method, it grabs all the elements from that argument until the end of the array, including the index in the argument. So in our example, we have made a copy from index 1 to favoriteFood.length - 1.

Here's a visual representation of our example:

Let's move on to slicing an array by passing two arguments.

Imagine that we want to copy only the 🍔 and 🌮 from our previous example to a new array.

​
In the above example,

Another thing that we can do with the slice() method is that use negative numbers for arguments. Let's see how this works with the below example.

In the above example, we have added a single argument as -3. This will start counting from the end of the array and slice it (not the beginning from the array). If we have given -2, it will return only ["🌮", "🍨"]. This is very useful when you want to get the last element of the array, and then you just have to use -1.

The slice() method is very useful for cloning an array, copying a portion of an array, and converting an array-like object into an array.

The splice() method helps you add, update, and remove elements in an array. This method modifies the array and does not create a new array. It will also return a new array with all the elements you have removed, which is helpful if you want to track what has been removed.

The splice() method takes several arguments to decide which elements to delete, the delete count, and what elements to add. You can check further details on these parameters below.

Let's see how to remove elements with a single argument, with only the start parameter.

We have our favorite fruits in the array below, and we want to remove the last two fruits.

In the above example, we have added the start parameter as 2, and that's where it has started removing things from this array. Since we haven't specified a second parameter, it has removed everything after index 2, including the index 2 element. So now the favoriteFruits only includes ["🍓", "🥑"]. And you can see the removed item in the array, removedFruits.

If you add 0 as the start parameter without any other parameters, it will remove everything from the array and change it to an empty array. Also, if you add any number higher than the largest index number of the array, it will not affect the original array.

So what happens if we add a negative number as the start parameter? If the start is negative, it will count backward from the end of the array and remove the elements. Check the below example.

In the above example, we have added the start parameter as -3. This will start counting from the end of the array and remove items. If we have given -2, the original array will return ["🍊", "🍇"].

Now let's see how to remove elements with the start and deleteCount parameters.

Check the below example.

So let's move on to adding elements to the array with the newElement parameter.

You can add a continuous list of elements separated by commas. Let's add two additional fruits to our favorite Fruits.

Let's see what we have done here:

We can add any number of elements to the array by separating them by commas. When we add elements to the array, the array will grow in length. Also, if you don't want to remove any items, you can simply add the second parameter as 0.
​
The splice() method is mainly used when you need to delete or add new elements to an array. And you can either assign the returned array to a variable or ignore it as you wish.

Now we have a clear idea about how slice() and splice() methods work. You can find out what's the main differences between these two methods below.

I hope this post helps you clear the confusion between these two methods. I use one trick to remember things: the letter "p" of the splice() referred to as permanently modifying the array. I hope it will help you as well 😊

Join Dasha Developer Community where you’ll meet welcoming like-minded developers who share ideas, questions, and get all the help they need to build cool conversational AI apps (for free, of course).

Once suspended, sumusiriwardana will not be able to comment or publish posts until their suspension is removed.

Once unsuspended, sumusiriwardana will be able to comment and publish posts again.

Once unpublished, all posts by sumusiriwardana will become hidden and only accessible to themselves.

If sumusiriwardana is not suspended, they can still re-publish their posts from their dashboard.

Once unpublished, this post will become invisible to the public and only accessible to Sumudu Siriwardana.

Thanks for keeping DEV Community 👩‍💻👨‍💻 safe. Here is what you can do to flag sumusiriwardana:

Unflagging sumusiriwardana will restore default visibility to their posts.