Reversing a String is indeed one of the most common and needed operations in JavaScript. During the journey of any Software Developer's career, a very important and basic question for interviews is "How to Reverse a String in JavaScript"

There are a few ways to reverse a string in JavaScript. We can use loops, built-in functions, recursion and even regular expressions to solve the problem. In this post, I am going to show these approaches with examples. So, let's get started!!

The very first way that I want to discuss is perhaps the most commonly used way, which is using the built-in methods. First of all, we need to split the string to an Array of Single Characters i.e.("s","t","r","i","n","g"), then reverse the characters and lastly join them again to create the reversed string.
Let's see an example first: 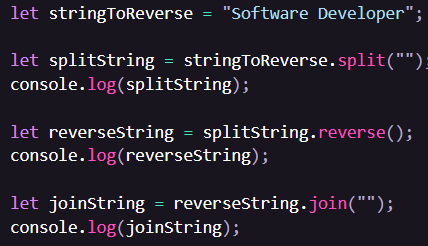 In this example, basically three built-in methods are used. They are : String.prototype.split(), Array.prototype.reverse() & Array.prototype.join(). To understand it properly, I am explaining it elaborately.

🔸 String.prototype.split() method splits the String object into an Array of String by separating the string into sub strings. In this case, stringToReverse.split("") returns the output as:

🔸 After the string is separated as an array of string, the Array.prototype.reverse() does the main work which is reversing the single array elements in place. The first array element is now the last array element and vice-versa.
In our case, splitString.reverse() returns the output as:

🔸 The Array.prototype.join() method finally rejoins all the single characters previously separated by the split() method to recompose the reversed string. In our example the final output is:

Well, these three methods can be chained to make our code compact and clean in the following way and the output will be the same.

However,instead of using String.prototype.split(), we can do this work using Spread Operator [...] also, which is a ES6 syntax. It works the same way as before.

So, the spread operator is exactly doing the same work as split() does, it is splitting the string object into single characters.

This is an easy and oldest approach of reversing a string in JavaScript but works pretty well everywhere. 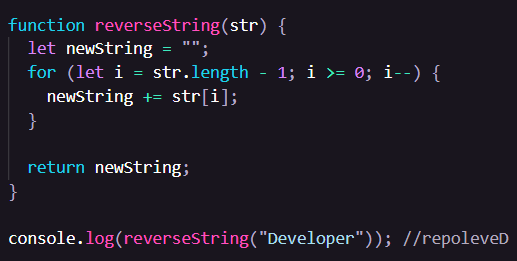 🔸 At first, newString created an empty string to host the new created string.
🔸 The starting point of the loop will be (str.length - 1) which corresponds to the last character of the string, "r". As long as i is greater than or equals zero, the loop will go on. We are decrementing i after each iteration.
🔸 The function then returns the reversed string.

We can also use the for loop syntax introduced by JavaScript ES6 which is also very easy to use and decreases the chances of mistake while writing the conditions of the loop. 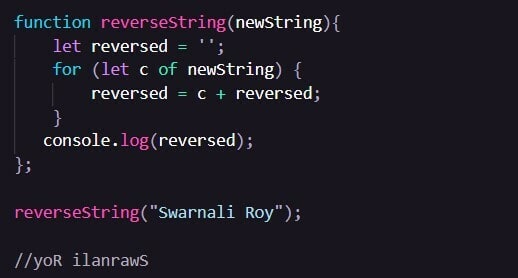 Much cleaner than the previous for loop, isn't it?? But works really fine!

🔸 The "c" in the for loop condition is taking each of the letter of the string as a single character. For better understanding I have added two console.log() statement in the following picture and also you can see the output in the terminal. 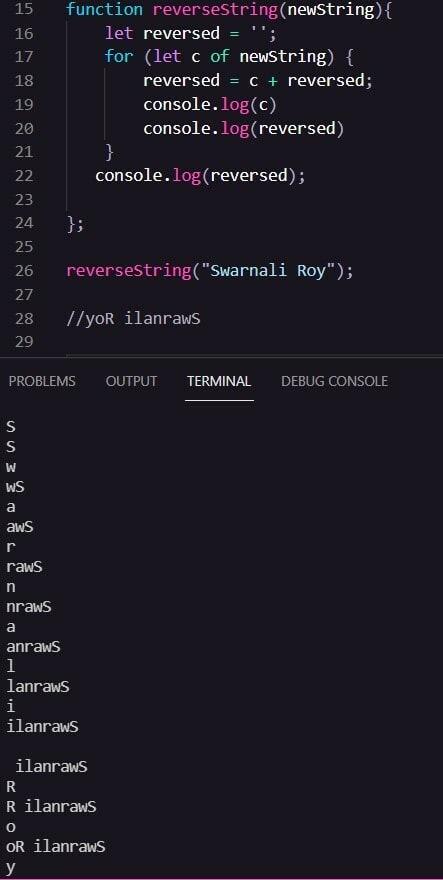 🔸 String.prototype.substr() method returns a portion of the string, beginning at the specified index and extending for a given number of characters afterwards.
In our example, the part str.substr(1) returns "ecursion".

🔸 String.prototype.charAt() method returns the specified character from a string.
In our example, the part str.charAt(0) returns "R".

🔸 reverseString(str.substr(1)) + str.charAt(0) firstly returns the portion of the string , starting at the index of the first character to include in the returned substring . Second part of the method hits the if condition and the most highly nested call returns immediately.
We need to remember that this method won’t have just one call but have several nested calls.

Nevertheless, this approach is not a best approach for reversing a string as the depth of the recursion is equal to the length of the string and in case of a very long string, it takes much more time than any other method and the size of the stack is a major concern here.

The Array.prototype.reduce() method executes a reducer callback function on each element of the array, passing in the return value from the calculation on the preceding element and returns a single value as the final result. The syntax can be written as:
reduce((previousValue, currentValue) => { ... } )

Let's see an example of this.

🔸 The reverseString function takes a string str as parameter.
🔸 The first thing that we need to do is to split the string into single characters. We took an array arr to hold the values.
🔸 reduce() function takes two parameters, reversed and character. If we compare it with the basic syntax of reduce(), reversed is the previous value/accumulator and character is the current value. The function stringReversed returns the current value adding it with the previous value, which is actually reversing the whole array characters and joining them together in a reversed way.

This code block can be more compact if we use JavaScript ES6 syntax. 👇

Making it a one-line code:

This is one of the rarest and trickiest approaches of reversing a string but developers who love to play with JavaScript Regular Expressions can definitely try this approach. Also, in any interview, if you can show this, that might be a plus point as it is such an approach that people generally don't use and they will know that you have mastered another skill that is Regular Expressions!
The following is an example of this approach:

🔸 The RegEx here is mainly doing the work of separating the string object into single characters of an array. After separating the reverse() and join() method is working exactly like it worked with split() or spread operator as I have shown above in the built-in approach.

I hope the readers understood the tutorial and it can help you in your interviews as well. Queries are always welcomed in the discussion section.