Note: I am not a Microsoft expert/insider, these are just datapoints compiled together by an interested amateur. Greg Whitworth of the Microsoft Edge team replied here!

It's less widely known that this calculation is tied to the end of life of Windows 10, which is indeed in Oct 2025.

It's much less widely known that Oct 2025 is the date for extended support of Windows 10, and that mainstream support for Windows 10 ends on Oct 13 2020.

This means "Mainstream End of Life" for IE 11 is this year, not 5 years from now. In fact, it is exactly five months from now.

Not being a Windows sysadmin, this was news to me too. But it makes sense on deeper inspection. Windows 10 was released in July 2015, so a 5 year "mainstream support" period with free upgrades sounds about right.

Enterprises pay extra for an additional 5 years of "extended support", which covers security updates as well as nonsecurity updates, but not new features.

Beyond that, you might be able to buy "Extended Security Updates" for 3 years. I could not find Win 10's pricing, but Windows 7 cost up to $200 per device per year.

An additional complication to consider is that there were 3 Enterprise LTSB/C versions of Windows 10. The 2025 Extended EOL date corresponds to that first version released in 2015, but there are two other versions, with EOLs going out to Jan 2029. So, any death of Win10/IE11 will be staggered rather than immediate.

However this is still true: The first end of Mainstream Support of Windows 10 is in Oct 13, 2020. This year.

When developers talk about a "Windows 10 End of Life", they seem to mean End of Support. I write this blogpost to point out:

This is what I mean by "Mainstream End of Life" of Windows 10, and therefore IE 11.

Why the Timing is Right

Microsoft's own approach to EOLing IE11 has been more subtle:

Microsoft also has had precedent in dropping support early for IE - and Edgium with IE11 mode may pave the way for end of Extended Support to come sooner than 2025.

The coronavirus pandemic also had an unexpected benefit to this movement - because most Win10/IE11 installations are on older office machines, working from home means that overnight, millions of Win10/IE11 users realized they could move without significant impact. (I'm sure there are plenty of Win10 laptops so... idk)

I'll preface this by noting the obvious: browser market share varies widely depending on what your customer demo is. You care about your customers more than you really care about global averages. But just to round things out where they stand right now:

With the facts already laid out, it's not hard to see that this year will be the first year Edge overtakes IE: 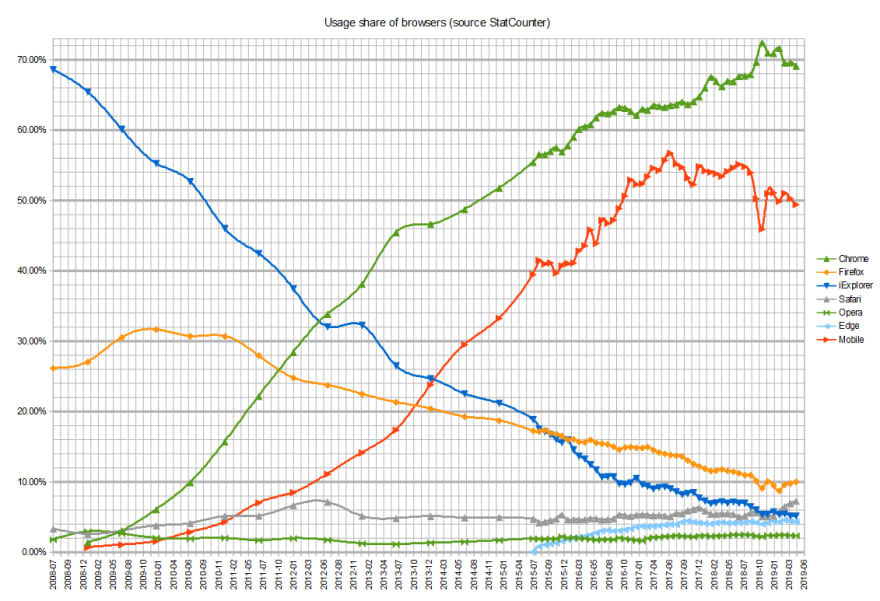 The development cost of IE11 support is high. Enumerating that cost is out of scope for this blogpost, but at a minimum, you should be employing the module/nomodule Differential Serving approach for serving legacy JavaScript. This ensures you don't penalize the ~98% of your users with modern browsers for the 1-2% of IE users.

However, even that approach doesn't account for CSS support and IE11 browser bugs/quirks. Those will still take up code weight and developer time. The key thing to realize here is that all code and developer time spent on IE11 support is effectively subsidized by other users on modern browsers. In theory, they all pay you (roughly) the same revenue per user, but you spend disproportionately more resources supporting legacy browser users. Hardly seems fair.

Point 2 helps you justify this move as a potential revenue stream - if you are doing this work anyway, you might as well get properly paid for it instead of stealing time from other users.

Point 3 is there because this is a collective action problem - this becomes more successful the more people do it, particularly within peer groups. I considered setting up a change.org petition, but have not done so because I don't consider myself a fit leader for this movement - I am just pointing out facts for people who may not know them. But if you tweet at me I will collect you and your company's vote and help whoever wants to take up creating this coalition (is that you?! please be you!).

Mike Sherov has also advocated actively blocking IE11 based on lessons from the Deaths of IE6 and IE8. Since we started getting automatic upgrades to Edge in February, this is finally a feasible IT policy you can justify.

I know I'm writing for a very narrow audience. I expect developers reading this post to be in 3 camps: EITHER you already don't support IE11 (supports es6-module is a good browserslist target, according to Jason Miller), OR you work at a BigCorp and you can pry IE11 from their cold dead hands, OR you work at a company that basically supports IE11 because your competitors do and because, for now, IE11 share is still above >1%.

If you fit that last description, I wrote this for you. We have a window, right now. You have 5 months to advocate internally, with all the stakeholders, and help make the Internet get a tiny bit safer and our industry a tiny bit simpler. You can also nag your users to update their browsers.

I'm rooting for you.

Thanks for keeping DEV Community safe. Here is what you can do to flag swyx: