A recent episode of SEDaily discussed Usage Based Billing but remained fairly superficial. I went down this rabbit hole a few months ago and came out uninspired — here are my thoughts on it.

Metronome has now emerged from stealth with a healthy Series A: 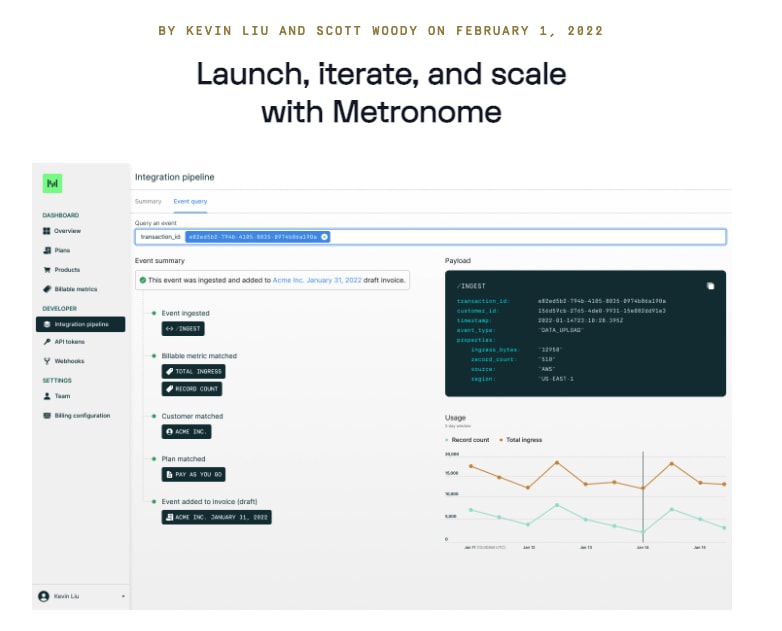 glad to see another UBB company come out of stealth!

I had a great chat with Puneet and Lior from Amberflo who are actual experts in this area:

Akash from Octane was also on PodRocket.

It was possibly the most painful, yet high-revenue-impact work that an engineer could do. Over the course of >12 months we painstakingly instrumented every single part of the platform to not just work, but charge real money for the work we were doing. First we started metering bandwidth, the most obvious usage to charge for a web hosting company. Then, new charges for build minutes, quietly rolled out via email. Then over a year later, the journey ended with usage charges for everything else. (This happens to exactly match the main components of cloud businesses: Networking, Compute, and Storage)

To be clear, as a DX Engineer I wasn't personally involved, so you are reading an observer's account of the problem, but I remember thinking at the time that this was a huge pain point. It took one of our most senior/capable engineers leading this project and we desperately wanted a "Billing Engineer" to lead this but it didn't seem a particularly attractive job to engineers. It wasn't particularly rocket sciency code, there were a lot of fiddly details to get right, and if we screwed up something we'd have particularly embarrassing consequences:

But it was also clear to me that this was important work — you can't get any "closer to the money" (a concept I discuss in my Career Strategy chapter) than literally working with money on billing. Everyone says the single biggest lever on your business is pricing. If your billing code directly helped change the pricing model which resulted in 2x'ing revenue overnight and 100x it long term, isn't that a big deal??

The move to usage based billing proved a good move for Netlify and was surely a factor in raising our Series C.

The Usage Based Billing Landscape

So when I heard David Ulevitch mention that all SaaS companies were facing the same usage based pricing problems we had faced, I got very excited. Whenever you have a boring-but-important feature you potentially have a great horizontal business on your hands. I asked for a list of who was working in this space and got a dozen DMs from people working in this space:

There's loads more getting into the game — Just a simple search of "Usage Based Billing" yields more names like Recurly, Cheddar, Paddle, SubscriptionFlow, and Zoho.

It's more than just Billing

Stripe itself of course does Metered Billing, and I got a confused DM from a couple of Stripe folks asking why that wasn't enough.

Why I was scared off

I was debating incubating, angel investing, or even personally working on this space myself, just based on how painful and how beneficial this journey was at Netlify. Ultimately I was scared off by the competition, and my inability to articulate some deep insight that Stripe or someone else might not eventually just build. I also was tempered in my TAM expectations when I saw that Zuora is still only at a $2b valuation.

Ultimately I think Usage Based Billing is a feature, not a product.

I Built A Tinder Clone Using The FARM Stack