A container is a lightweight, standalone, executable package of software that includes everything needed to run an application; that is, source code and all dependencies, such as the runtime, system tools, system libraries, and configurations.

Because containers are self-sustained, they ensure that an application is decoupled from any environment specifics. If a container image gets distributed to developers, every one of them will run the exact same application with all its dependencies. When this image gets promoted to a test or production environment, the technology ensures that it is the same piece of software the developers created and tested on their machines. This holds true regardless of whether those environments are in a local data center, a cloud provider, or a hybrid of the two. Since configurations for resources such as databases, identity providers, or systems hosts vary in different environments, configurations are externalized so they can be passed to the container as part of the promotion process.

Unlike VMs, which include their own operating systems and require a hypervisor to run, containers reuse much of the host operating system, include the minimum run time requirements of the application, and do not require a hypervisor. VMs are full-size virtualized computers that run everything a computer runs, while containers run a single application mapped to a single process; you will never encounter two servers running in the same container. (Note: While many processes can run in containers, it is not considered a good practice.)

Software AG uses Docker as its container image creation tooling, but you can use any Open Container Initiative (OCI) compliant tooling. With Docker, you can develop an application in the traditional webMethods way, then package it in a solution image. You can then test this image and promote it to other environments to run as container without any additional code changes.

You can create a product image for a Software AG product from the Software AG Installer or from an on-prem installation and out-of-the-box Docker scripts. Alternatively, you can use pre-built container images provided on DockerHub by Software AG. 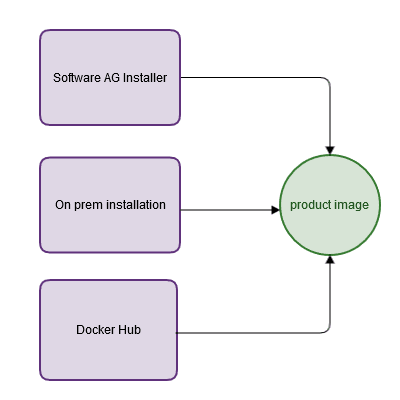 Create a Product Image from Software AG Installer (10.7 and Later)

You can create a product image with fixes using the Software AG Installer that is released with webMethods 10.7.

When you want to update to a new fix level or upgrade to a new Software AG release, you will need to create a new product image. You can fully automate this process.

Create a Product Image from an On-Prem Installation (10.5 and Earlier)

You can create a product image with fixes from an on-prem product installation and the out-of-the-box Docker scripts. Follow these steps:

When you want to update to a new fix level or upgrade to a new Software AG release, you will need to create a new product image.

Use a Software AG-Provided Product Images from Docker Hub

Software AG provides product images on its official organization in Docker Hub. You can download and use these images.

Each image includes a single product. For Microservices Runtime, the image does not include any layered products.

Some product images include fixes. Such images are labeled with a minor release number (for example, Microservices Runtime 10.3.4).

A solution image is the result of a CI/CD build process based on a previously defined product image (that is, product installation and fixes) plus developed assets. This creates a working piece of software that can go through unit and integration tests and eventually be deployed into production.

You can create solution images using the file copy functionality of the Docker multi-stage build process. Below is an example for Microservices Runtime.

Rebuild your solution images after you or Software AG creates a new product image or whenever you produce new assets. The latter might be as often as daily in active development when using a properly set up CI.

Important! Do not start a container, then use a runtime deployment tool such as webMethod Deployer to deploy the container, and then commit back to an image. Although possible, such a procedure is against best practice.

If you already use a Software AG Local Development Environment and a version control system such as Git to store your assets and configuration, you must not adapt your development setup when moving towards container deployment.

However, you will need to set up a CI process that creates an immutable solution image out of the product image, the licenses, the latest configurations, and your assets.

The Software AG asset and container life cycle is shown below. 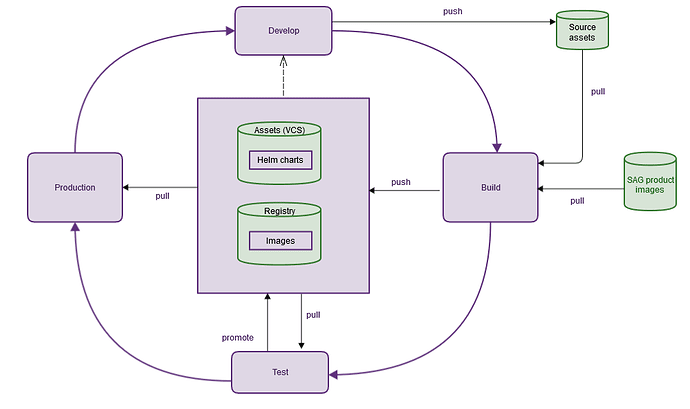 Different environments (for example, dev, test, prod) typically require different configurations for resources such as databases, identity providers, licenses, and so on. In containerization this challenge is handled using these approaches:

Orchestration is not a new concept for webMethods. webMethods on-premise installations typically orchestrate multiple products to build a solution. For example:

webMethods has been leveraging the power of orchestration for decades, because a single product rarely can cover a use case on its own.

You can combine individual solution containers to build a solution by orchestrating those in the same way on-premise installations are orchestrated and wired like:

Software AG uses the open-source platform Kubernetes to orchestrate container deployments. With Kubernetes, you can deploy, monitor, scale, and upgrade complete solutions more easily than you can using on-premise installations because you are orchestrating containers rather than physical machines or VMs. Below are some of the key strengths of container orchestration.

Hyperscalers such as Amazon, Microsoft, and Google have customized Kubernetes as part of their serverless offerings (for example, Amazon EKS, Azure AKS, and Google GKE). Software AG products that are certified for Kubernetes can run on all flavors certified by the Cloud Native Computing Foundation. However, many of those, such as AKS and EKS, offer custom services like databases, specific network storage, secrets managers, and identity providers. To determine whether a Software AG product can run with specific service components, see System Requirements for Software AG Products .

Deploying a Solution in Kubernetes

A full solution deployed in an orchestrated environment will consist of a set of solution images made available in a container image repository. There are several ways to deploy these images:

Observability of the Kubernetes Infrastructure

To monitor the health of the Kubernetes cluster itself, or the pods and services that run your application, you can use either the kubectl CLI, the standard Kubernetes dashboard application, or some of the custom UIs delivered with specific Kubernetes flavors. Those built-in mechanisms will report the status of the components that make up your application (for example, ready, started, failed).

Monitoring a Solution in Kubernetes

Every Software AG container provides a REST API that returns metrics for the system at the current moment. The metrics provided by the products are quite similar to the ones provided for Software AG’s Optimize for Infrastructure product. These metrics are “pulled” from the containers by Prometheus and aggregated. Prometheus should be installed in the Kubernetes cluster as an application and set up to pull the data from the solution containers based on the Kubernetes service discovery mechanism. The aggregated data will be stored on a non-volatile storage and can be displayed on a custom Grafana dashboard. Prometheus can also send alerts, based on the rules over the collected metrics. This can help administrators proactively perform actions on the application. The following figure gives a good overview of the monitoring architecture of an orchestrated solution. 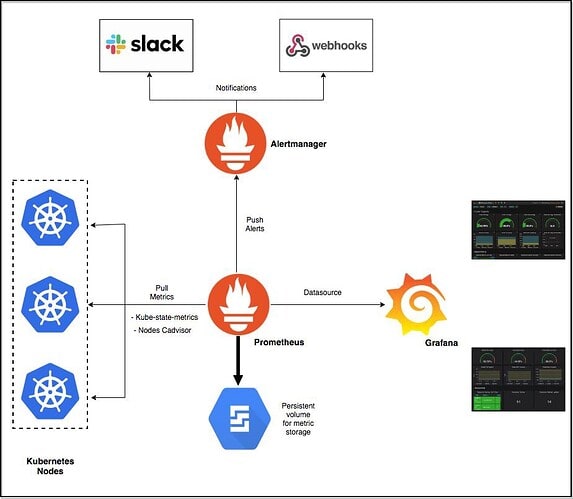 Logging in containers and orchestration environments differs significantly from the on-premise world. This is due to the ephemeral nature of containers and their scaling capabilities. Logging to a file is not useful because when the container restarts, it just resets the state of the file system and any logging information would be lost, along with the ability to troubleshoot any problem that was present. The scalability of the container means that there isn’t a fixed number of runtimes at a given time, so getting their logs one by one is not a workable solution.

The solution to this is to produce logs only as event streams. The logs from every container should be written to its std.out and std.err streams. This gives other services in an orchestration environment the ability to collect and aggregate those streams for analysis. The pattern is emphasized as factor 11 Logs of the The Twelve Factors App methodology.

The service stack that enables the pattern typically comprises three components: ElasticSearch for persistence, Fluentd to collect the log streams, and Kibana to display and analyze them. This is commonly referred as EFK. Sometimes the stack uses Fluent Bit, which has similar functionality to Fluend but is lighter in size and feature set. A variation may also use Logstash for the log aggregation (ELK). The following diagram gives an overview of the EFK architecture. 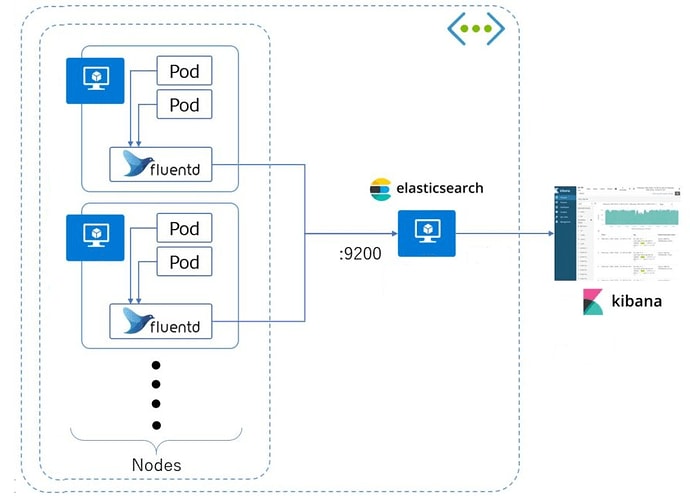 To deploy the stack, all components must be downloaded and running in the Kubernetes server. By default, the stack will gather and aggregate all log streams from all solutions. The UI layer, Kibana, can query the logs based on patterns. As the log streams are queried from multiple runtimes and from multiple components, the usage of correlation IDs is highly recommended for troubleshooting.

Similar to the other capabilities discussed above for the orchestration environment, backup and recovery are covered by third-party tools. Those should be installed in the environment to give access to all pods, services and configurations. Possible solutions include Portworx, Velero, OpenEBS, and Rancher Longhorn.

High availability is something that comes out of the box with Kubernetes. Every runtime aiming to run in K8s has implemented HTTP endpoints for liveness and readiness. If either does return 200 OK, K8S will automatically restart it and make sure it runs again. The same will happen if there is a Kubernetes node failure. Image the hardware, where your solution was currently running fails; Kubernetes will automatically recognize that one of its nodes are down and will start the containers on different nodes, to make sure they are operational in minimal time.

If the downtime in this scenario does not guarantee the needed SLA, the deployment can be scaled behind a load balancer with more instances. However, this should be allowed by the software itself; for example, Universal Messaging does not allow this in some of its use cases, such as when it is used a JMS provider.

Upgrading a solution in an orchestrated environment is related to updating the underlying images. The images might be updated in the following cases:

When deploying a new solution image to an orchestrated environment, one must consider all dependencies:

If the dependencies are satisfied, you can deploy the new image. In certain cases, this deployment will have zero downtime

An upgrade of a stateful application will require downtime. Known limitations are:

See Orchestration, above, for information about Kubernetes flavors.