As a Webdev beginner, you'll hear a lot of words thrown around by the more seasoned folks and find yourself swimming in a pool of buzzwords. What's worse is that when you start trying to distinguish between them, you find your list is getting longer and longer, and all you've done is look at the "What is {Buzzword}" landing page!

When working on the web, you'll be writing HTML, CSS, and Javascript. As long as everything is happening within your site, there are no issues,but what if you want to pull some information from another applications database? This is where APIs come in! APIs provide guidelines for you to request information from another location and offer a way to communicate between programs, even if they are written in different languages!

"SOAP is squeaky clean. REST is for people that like sleep"

SOAP and REST are protocols for creating APIs. The way it was explained to me is that SOAP has a more strict list of rules while REST is like the Wild West (every API gets to set its own rules). This is because SOAP is a set of interactions that can get your data, while REST lets you grab the data and do what you need with it.

Most likely, you'll spend more time working with REST APIs as my understanding is that SOAP is primarily delegated to legacy code.Learn More about SOAP vs REST

You've most likely heard of frameworks but may not have realized it was a framework (e.g. React, Angular, and Vue).

Imagine you're sitting in Math class and asked to draw a graph of y=x on one of 3 pieces of paper in front of you (blank, college ruled, graph paper).

If you would use a blank piece of paper to achieve this, that would be like using no framework or programming language. There's no guidance other than remaining within the physical bounds of the paper.

If you used college-ruled paper, you've added a programming language. One of your axes will be able to follow the pre-drawn lines, but outside of that, you're on your own.

Finally, using the graph paper is adding a framework to your programming language. With the assistance of the graph paper, your graph will be much cleaner and easier to draw.

Many modern frameworks utilize something called "Components", which are reusable pieces of code. Imagine a website with 3 pages, but you want to add the same Header to every page. One way to do this would be to copy and paste your header's HTML for each page. > But what if you need to update part of the header? To update the header, you would need to go to each page and make the same adjustment. This might not be a huge issue for a 3-page site, but what if your site was 100 pages? That's where components come in! If you build your navbar as it's own component file, you can import it into each page of your site as you build it and end up with something like this:

Now when you need to change your navbar from being Clever Site Name! to Cool Site Name! you can do it by only adjusting the single line of the navbar file instead of adjusting each page individually!

Cool! So how do you use components? That's where React, Angular, Vue and Ember come into the picture. They are all frameworks that allow you to create components and build websites/apps using your components. They each have differing opinions about how you should create components, but they all help you achieve the same goal. There are some nuances to why you would choose one over the other, but when it comes to picking which you want to dive into, I recommend trying each of them and deciding for yourself. 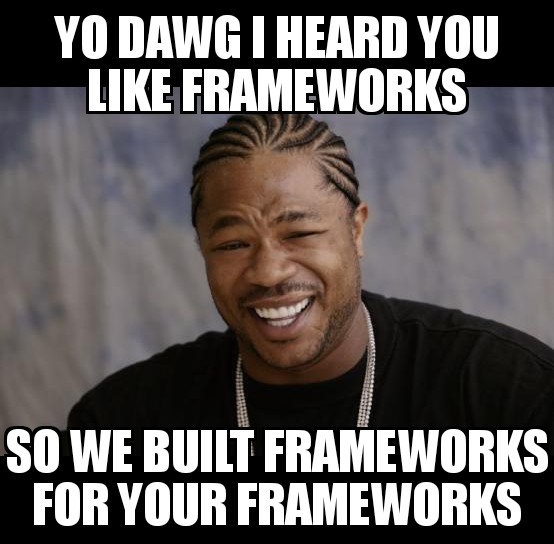 (The following holds true for any of the three frameworks above. Gatsby pertains to React, but feel free to swap Gatbys for Gridsome and React for Vue [Or any other child/parent framework pair that you want])

As you work with React, you'll find that there are certain things that require a lot of frustration and setup to get working. Gatsby is a React-based framework that helps ease these frustrations by offering pre-configured setups so you don't have to figure it out yourself.

Node.js is here to help!

While not usually referred to as a framework, Node is very similar. It gives a set of guidelines and does the background legwork for you to get your server up and running.

npm is a command line tool that is used to easily manage dependencies for your project. It allows you to run a command as simple as npm install react to add everything you need to add React to your project, including any npm packages that React relies on to do React things!

Note that there are a lot of nuances to using npm, this is just a very high-level overview.

As it turns out, basically everything.

Electron lets you build desktop applications in JS that can be run on Linux, Windows, and even macOS! Once you've written your Javascript, Electron takes your code, performs some voodoo magic on it, and spits out an application! These apps can get popular. Perhaps you've heard of one called VS Code?

Nativescript and React Native let you do the same magic to convert Javascript to iOS and Android deployable apps.

Note:Even though JS is used for Electron, Nativescript, React Native, and Node.js, they do require different rules when developing them. Sadly it isn't as easy as: write your website, run 3 commands on it, and suddenly you have an iOS app, Android App, and Desktop app. That's where PWA's come in!

Progressive web apps are a very new feature for web developers. While they can take a bit to get up and running the first time, what they do is really cool! They let you take your website and save it as an app for whichever platform you're on (macOS support coming soon)!

I think PWAs are best described as the next evolution of bookmarks.

For an example on how these work, you can open Chrome's ... menu for dev.to and click Install DEV community...

JAM is an abbreviation for Javascript + APIs + Markup. The JAMstack is a way to describe that a site is utilizing these 3 pieces to generate its information. Many of the "sub-frameworks" described under Gatsby & Friends above are built to make developing a JAMstack easier.

Markup is something you're probably more familiar with than you realize. It's a set of styles to apply to specific tags. If this is sounding familiar, it's probably because the "M" in HTML stands for Markup! It's what tells the browser that <h1>Title</h1> should be larger than <h2>Title</h2>.

Hopefully, this has helped clear up some of the words that more seasoned developers throw around when discussing webdev! I know that for me, getting thrown into the deep end where everyone seems to know these phrases was very intimidating when I was starting out!

If there's a certain word/phrase that recently "clicked" for you or anything that wasn't covered on this list that you're still unsure of, feel free to let me know in the comments or via DM!

Tyler V. (he/him)
He/Him. A developer that loves to teach others and spread my passion for Mathematics, Coding, and Pet Photography! In love with Vue.js 💚
Intro to SEO | What is a Canonical URL?
#seo #webdev #blog #blogging
Beginner's guide to state management
#beginners #codenewbie
Learn in the wrong order
#beginners #learning #codenewbie

Once suspended, terabytetiger will not be able to comment or publish posts until their suspension is removed.

Once unsuspended, terabytetiger will be able to comment and publish posts again.

Once unpublished, all posts by terabytetiger will become hidden and only accessible to themselves.

If terabytetiger is not suspended, they can still re-publish their posts from their dashboard.

Once unpublished, this post will become invisible to the public and only accessible to Tyler V. (he/him).

Thanks for keeping DEV Community 👩‍💻👨‍💻 safe. Here is what you can do to flag terabytetiger:

Unflagging terabytetiger will restore default visibility to their posts.