Over the past week or two, I've been working through a bit of jQuery with someone, which I had barely used when following an online course last summer and not at all since then. In the process of walking through why their code wasn't working, I realized that technical docs are pretty scary - especially when you aren't very familiar with the language/framework.

Here, I want to walk through my process of reading the technical docs and working through the code to help get the code working!

The docs in question

If you're a bit unclear on the specific words for parts of a function, I don't blame you - there are a lot of parts! If you aren't sure of a word I'm using, need a refresher, or just like sweet infographics, take a quick peak at this tweet from Wes Bos: 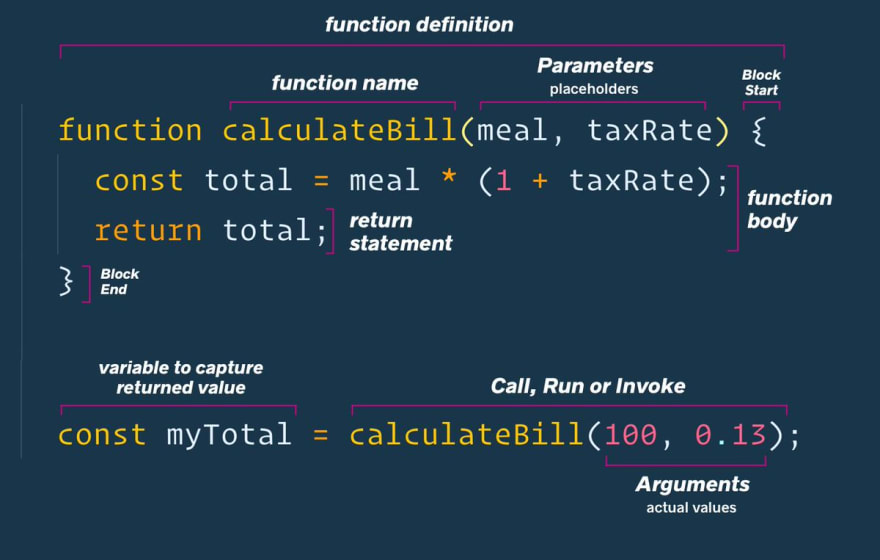 Anything I'm missing here? Trying to make a visual for all the words that get thrown around when I'm teaching functions

Working through the problem

The code that was initially sent to me looked like this (narrowed down to the important parts):

The first thing I did was search for "Add a value to a button jQuery" and ended up on the docs for the val() function. After reading the w3schools article about val() I realized that this wasn't the function that I wanted.

A few search results further into the list was the documentation for attr(), which indicated to me that it was probably the correct function for at least line A.

The reason I didn't start with the attr() documentation was twofold:

My first pass at how attr() works was not the most fruitful. I jumped to the first block of text (.attr(attributeName)) and skimmed through how it works and changed line A to be:

Returning undefined was unsurprising, and I started to search for "add an attribute jQuery". These results continued to point me back to attr() which made me realize I must be missing something about how the function worked.

In particular, this post on tutorialrepublic.com made me realize there was more going on with the attr() function than I gathered at first glance.

What was occurring within the attr() function was something known as "Overloading", which allows a function to act differently based on either the quantity or type of arguments provided.

An example of overloading in Javascript:

What happens here is that depending on the quantity of numbers passed in, the function will determine if it needs to add the third number to the total based on if there is a third number provided.

Now that I realized what was happening, I headed back to the docs. Namely, the .attr(attributeName,value) function, which allows you to pass a value to be assigned to the designated attribute.

I updated line A to be:

And... Voilà! The inspector was now showing buttons with a data-sport attribute!

Hopefully walking through how I approached this will help you feel a bit more confident next time you need to use the technical docs to figure out what isn't working quite right.

❓ What are your tips for navigating the world of technical docs? ❓

Once suspended, terabytetiger will not be able to comment or publish posts until their suspension is removed.

Once unsuspended, terabytetiger will be able to comment and publish posts again.

Once unpublished, all posts by terabytetiger will become hidden and only accessible to themselves.

If terabytetiger is not suspended, they can still re-publish their posts from their dashboard.

Once unpublished, this post will become invisible to the public and only accessible to Tyler V. (he/him).

Thanks for keeping DEV Community 👩‍💻👨‍💻 safe. Here is what you can do to flag terabytetiger:

Unflagging terabytetiger will restore default visibility to their posts.