I made the ts-nextjs-tailwind-starter after I got tired of setting up a new project and have to initialize Tailwind CSS every single time. After some months, this starter has grown and is filled with a lot of development automation and tools that help me when I'm developing.

This is something that I use every project init, features are carefully curated, and put into this repository.

According to my list, these are all the features that I incorporate on ts-nextjs-tailwind-starter:

Quite a lot huh? I'm going to take an in-depth look at each feature and automation with this post.

Don't you hate it when you use a starter, then you see some branding or default configs left out unchanged? 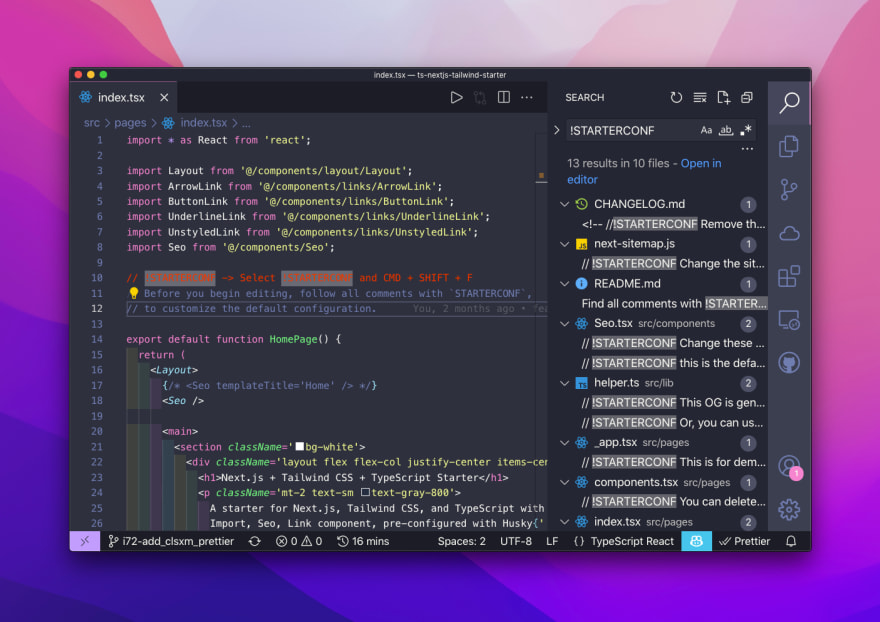 I prepared a unique word that you can find, with some guide of what to override. You can remove the comments after you override them, and leave them if you haven't. Treat them as a to-do comment.

I prepared a set of components that is neutral and can be used to help boost your speed in development. These are components that have a high chance of being used, not just getting deleted after you finished cloning the repository.

All animations are configured to be motion-safe.

You can change it with CSS Variables. I prepared all Tailwind CSS colors converted to CSS Variables in the styles/colors.css file that you can copy and use. 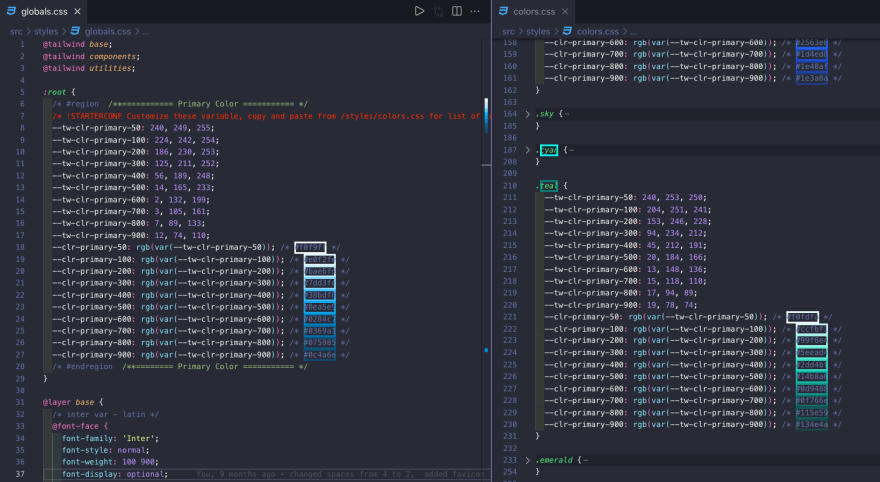 See more details about components on the demo page

Do you want your project to be indexed to search engines? Yeah, me too. I optimized the SEO by preparing a custom Seo component and adding next-sitemap. 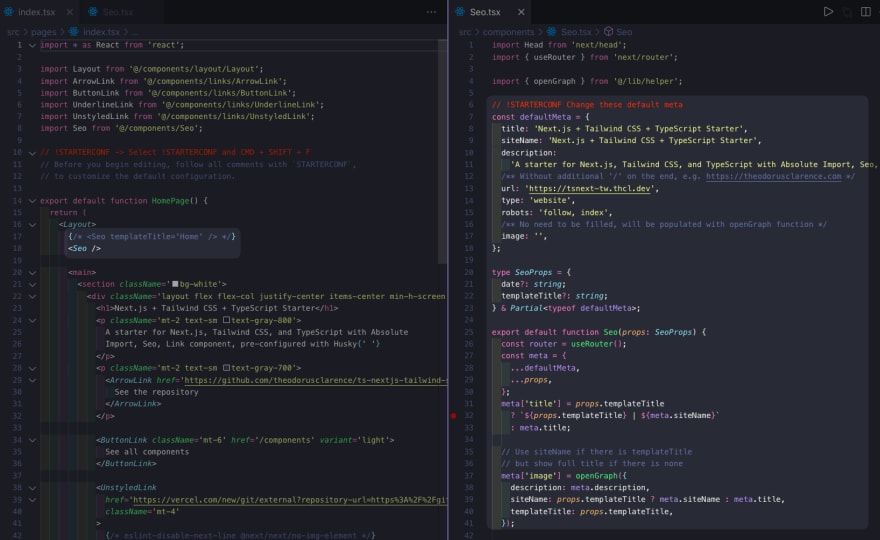 If you want to use the default meta tag, just add <Seo /> on top of your page.

You can also customize it per page by overriding the title, description as props

or if you want to still keep the site title like %s | Next.js Tailwind Starter, you can use templateTitle props.

I tried to keep the dependencies small, not the devDeps tho, you'll see why after you see a bunch of automation I create. Here are the 3 dependencies (excluding Next.js and React deps)

The tailwind-merge can be used by importing clsxm from @/lib/clsxm. All of the pre-built components are using clsxm to ease the use of the reusable components.

Here is a thread that I made about tailwind-merge: 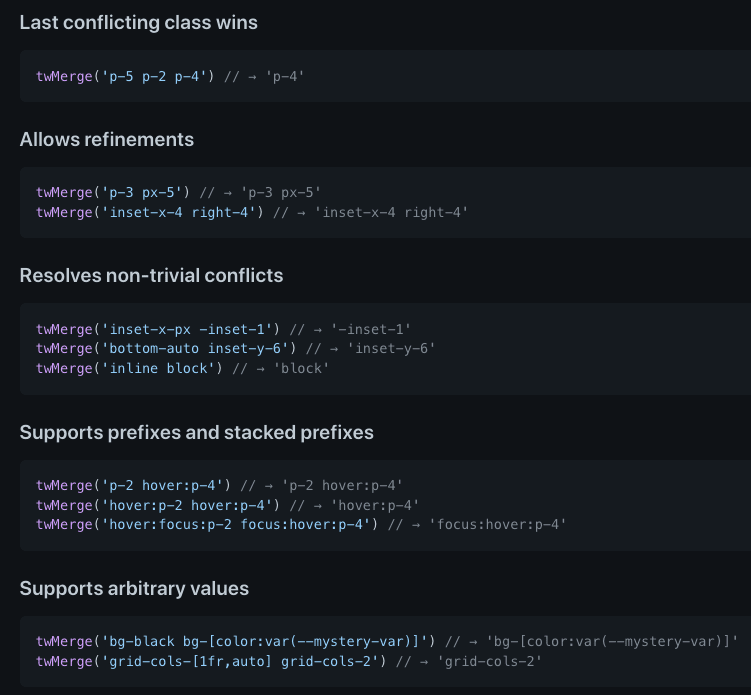 Using this, we can override reusable components @tailwindcss classes without using the !important modifier.

The lib looks stable, and this simplifies by a lot when constructing conditional class originally with clsx.

Reduce the complexity of importing components by using absolute import, and a nice path alias to differentiate your code and external libraries.

In this repository, I set it up so it will automatically sort class based on the custom config file. It even works with clsx or classnames! You don't need to ask your colleague to download another VS Code extension. All of it is bound to the repository.

This repository is prepared with ESLint to reduce human errors during development. Don't worry there won't be any annoying styling lint because all of it is taken care of with Prettier. Some cool features such as:

Don't you hate it when you have to revise your code because your reviewer told you to reorder imports? If they haven't automated it, do yourself a favor by recommending this starter.

There are 3 Husky hooks that will help you with the automation of:

Oh right, you also don't have to wait that long because husky only the code that you stage (using lint-staged).

What about the type check, or if the staged code made the other fail? Don't burden your efficiency, just chuck it into Github Actions to run in the background.

I love automation and I put some useful workflows that you can use.

For the sake of efficiency, we don't run whole project checks on your local machine. That takes too long just to commit simple changes. We will run it on Github Actions instead, then you can continue working while waiting for it to complete.

Here are the complete lists that will be checked: 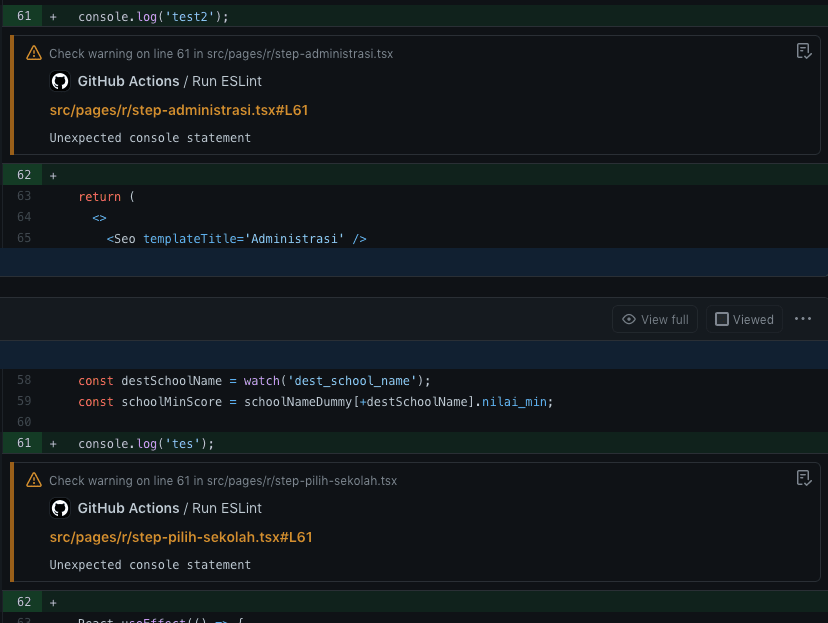 We can automatically create a branch from the latest main branch after you assign an issue.

This will create a consistent branch name with the issue number in front of them, and some issue context.

p.s. You have to install the app for your organization/account/repository from the GitHub Marketplace for this to work

We automated the branch creation, the lint & the test process on the PR, what's next? Yep, linking PR to issue. That is super annoying and I always forgot to do it. We'll automate it using our consistent branch name.

It also provides a nice description of related issues, so your reviewer can check the issue first before reviewing.

I also provided an open graph application that you can fork and deploy to vercel for free. It is automatically used with the SEO component and will generate a dynamic open graph based on the page title and description.

It defaults to my deployment, but please fork it and self-host. Because I might change the API without notice and could break your app's opengraph. 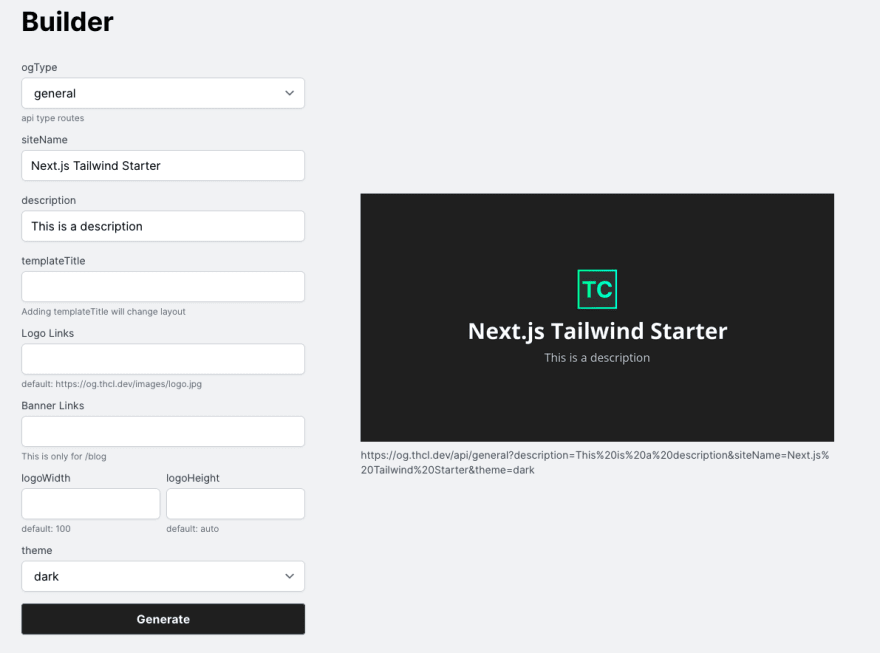 You can play around with the API on og.thcl.dev. You can even customize it with your own brand based on the repo!

Snippets are crucial if you want to make a consistent convention across the application. I prepared some snippets that can help you code faster and more effectively. 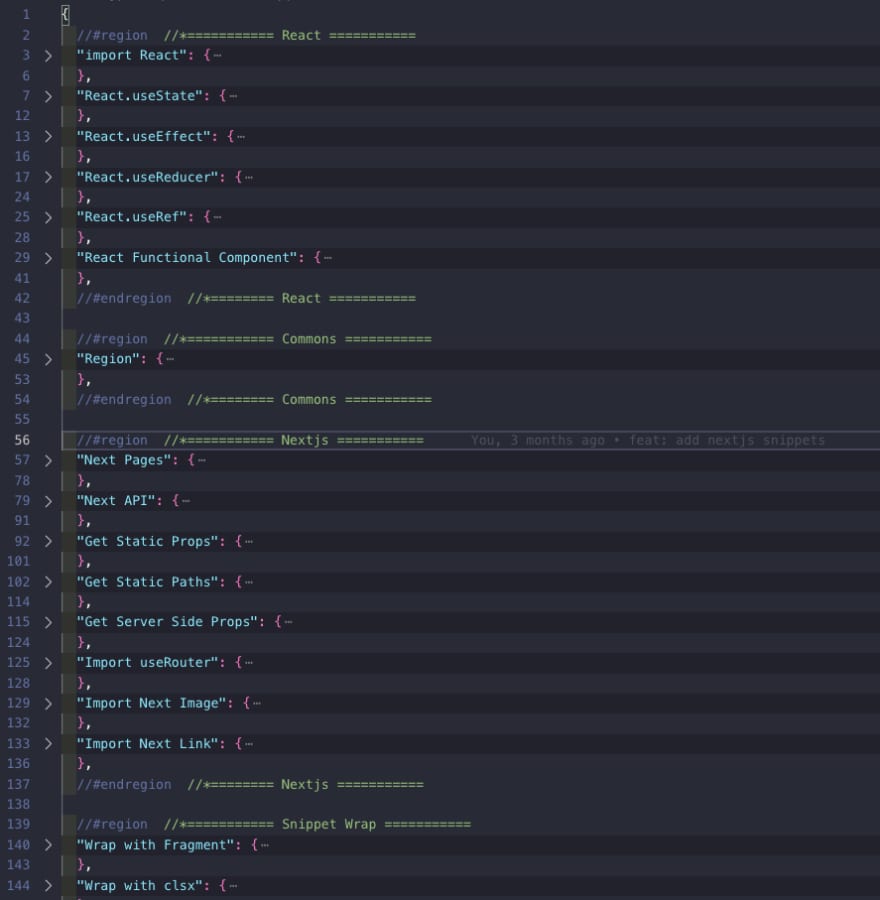 See more detail on this file

You might notice the #region with green highlight comments. This is something that can be used with reg snippets. You can easily separate your logic into named regions, then fold them if they are insignificant.

The lesser noise the better. You can also use ⌘K + ⌘8 to fold all regions.

This is something that I recently added because it is annoying to wrap a component with React Fragment or refactoring className with clsx. So I created a snippet pattern called Snippets Wrap that can help you with that.

I have to keep this starter minimal, but there are some libraries that I often use in every project. So I created a bash script to install, config, and add additional components to this starter.

Currently, there are some packs in the expansion-pack repository

Here is a demo for the React Hook Form one

Hit the terminal then grab some coffee. You're back with complete components also a sandbox page to see how to implement the library.

For more demo, check out the repository readme

Liking the features? This repository basically grows with me, so the features will go through changes and improvement. If you got anything in mind, leave a comment below, or open a discussion.

Finally, I would be thrilled if you give a star to the repository.

Originally posted on my personal site, find more blog posts and code snippets library I put up for easy access on my site 🚀

Once suspended, theodorusclarence will not be able to comment or publish posts until their suspension is removed.

Once unsuspended, theodorusclarence will be able to comment and publish posts again.

Once unpublished, all posts by theodorusclarence will become hidden and only accessible to themselves.

If theodorusclarence is not suspended, they can still re-publish their posts from their dashboard.

Once unpublished, this post will become invisible to the public and only accessible to Theodorus Clarence.

Thanks for keeping DEV Community 👩‍💻👨‍💻 safe. Here is what you can do to flag theodorusclarence:

Unflagging theodorusclarence will restore default visibility to their posts.