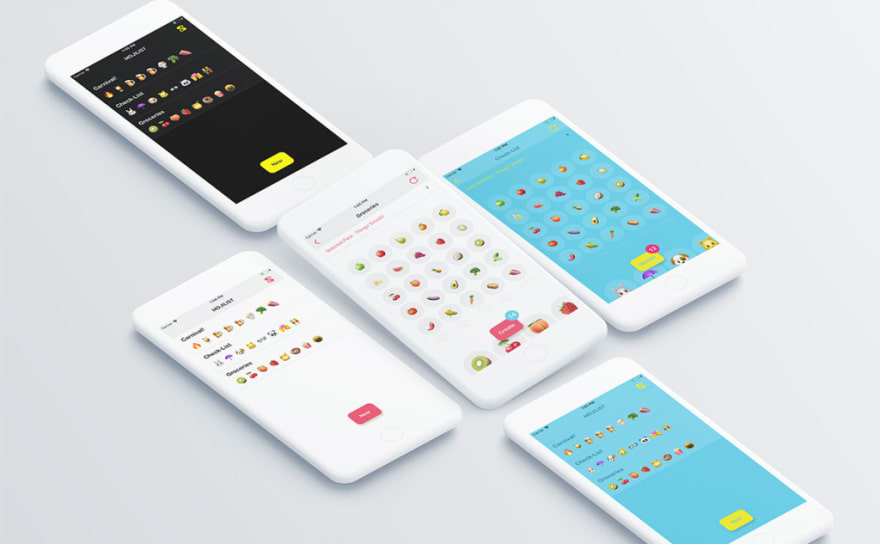 Originally posted in my blog. Following the same idea of Show HN, this post is to spread the word to the DEV community.

Earlier this year, I had the project of creating one new app per month, try to monetize them or run them as a side-project business. I started with the idea to solve a problem that I had.

I wanted a straightforward way to create shopping lists using only emojis. Just that, only emojis are allowed. Instead of writing:

Pretty silly, but still fun. Check out the repository here.

I had a fun time creating it, exploring a new project architecture for iOS from scratch and trying out some nice libraries like Realm and Spring. I even calculated the amount of time I invested creating it so I could calculate how much I needed to get in revenue in return by selling it:

Everything was fine, and I was excited to release, I generated the screenshots needed, and I have sent the binary to Apple for review. My surprise was that the app got rejected because it used Emojis:

First of all, I was surprised they were enforcing such policy, to me it makes no sense: they already charge a big chunk of any sale in the store (30%), the minimum I expected was to be free to use at the emojis they have popularized throughout their platform. It's not like they wouldn't get paid for it 🤷‍♂️

Personal opinions aside, I would need to draw many icons to get the chance of resubmitting it, and I think my time would be better invested in other stuff (like learning Node.js, React.js or creating another app that does not use emojis 😡). So I decided to open source this project to get community feedback and perhaps create something else from it. Maybe it could be a good starter for junior developers to try to understand how to build an app from scratch.

Unfortunately, I had to remove the iconography I used, as it is copyrighted. But other than that, the rest is distributed under Apache 2.0 license. Enjoy by checking out the repository at GitHub and let me know what you think!

Thiago Ricieri
Software engineer at Pluto TV. Machine Learning and Artificial Intelligence enthusiast; travel and music addicted.
Stop saying "Stop using Else" and other nonsense! ...
#beginners #career #codenewbie
What was your win this week?
#discuss #weeklyretro
I made an admin dashboard for React using Typescript! Use it for free!
#typescript #webdev #showdev #react

Once suspended, thiagoricieri will not be able to comment or publish posts until their suspension is removed.

Once unsuspended, thiagoricieri will be able to comment and publish posts again.

Once unpublished, all posts by thiagoricieri will become hidden and only accessible to themselves.

If thiagoricieri is not suspended, they can still re-publish their posts from their dashboard.

Once unpublished, this post will become invisible to the public and only accessible to Thiago Ricieri.

Thanks for keeping DEV Community 👩‍💻👨‍💻 safe. Here is what you can do to flag thiagoricieri:

Unflagging thiagoricieri will restore default visibility to their posts.