Perl has its own platform for blogging with Perl specifics posts only. It is maybe a particularity of Perl community, even if I'm not sure about that.

From what I know, between 2001 and 2010, Perl developers were initially blogging on use.perl.org that was decommissioned in 2010.

Then they moved (partially) to blogs.perl.org or as some people call it "BPO". 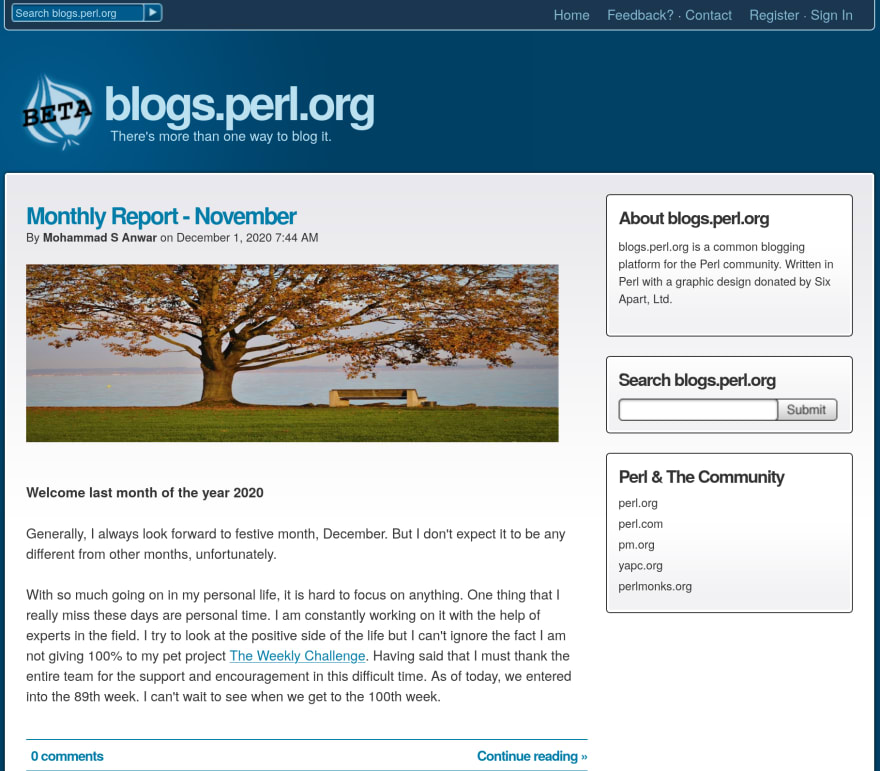 I like the principle to have a dedicated place where you come to check Perl related posts... but unfortunately there seems to be long standing problems with blogs.perl.org 😕

Before I continue, I just wanted to say « thank you » to all volunteers that are running BPO. The imperfections do not remove their effort to bring this valuable platform to the Perl community 👍

There were already TPF 2 grants :

A "grant" is a mission paid by The Perl Foundation

Both grants were trying to migrate to PerlBee that is a blog engine written in Perl.

What went wrong ? What is the difficulty ?

I don't know exactly, but I believe without any doubt that there were several problems that make it not straightforward at all and make these grants fail.

Despite these numerous problems, BPO is up and running, with reduced posting traffic (maybe 5 posts a week).

One of the former admin behind BPO seem pushing to make people migrate elsewhere but without making it read-only or cutting the power (so far). They obviously don't want to invest any support in BPO since it is in a kind of "decommissioning" state.

Are bloggers happy or they tolerates the drawbacks ? I don't know.

I WAS a fervent supporter of keeping this "concept" running...

I was even about to drop a new idea on the table of possible replacements, but I finally refrained and time gave me the answer 😄

I will elaborate below.

Concerning blogs, I'm more a reader than a writer, and if I call Perl bloggers to come on DevTo, it is because I'm eager to read your posts.

Anyway, recently I tried to write a bit more.

I found this schema on rakhim.org and I found it very true :)

(I circled where I'm standing) 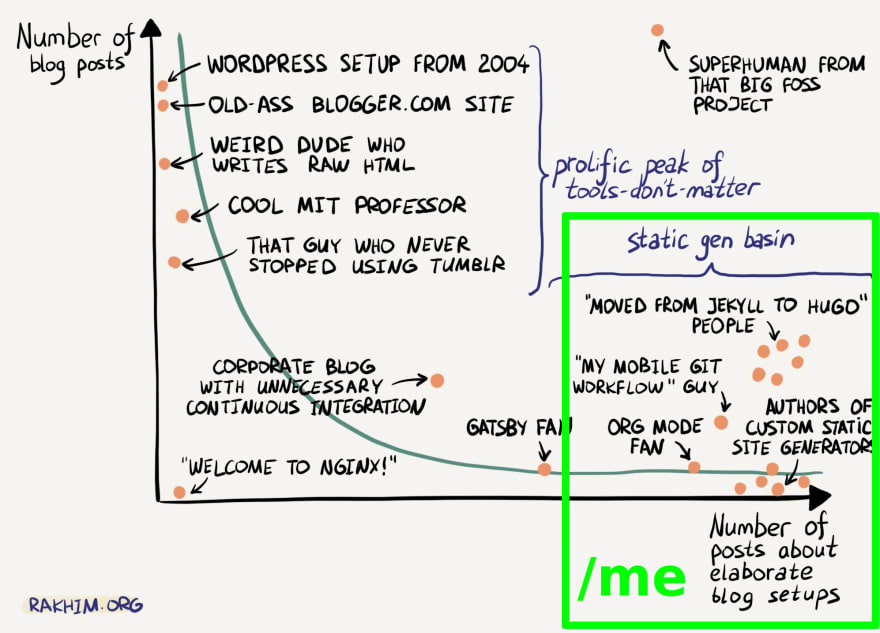 Yes, I wrote a static website generator (in Perl) that is so quick and dirty and not generic that I will never made it public :D

And I also used hugo and I still use it for instance when contributing to perl.com

If I "customized" it, it was mainly to make it more "Perlish" 😄

(do not look for this blog, I killed it some days ago) 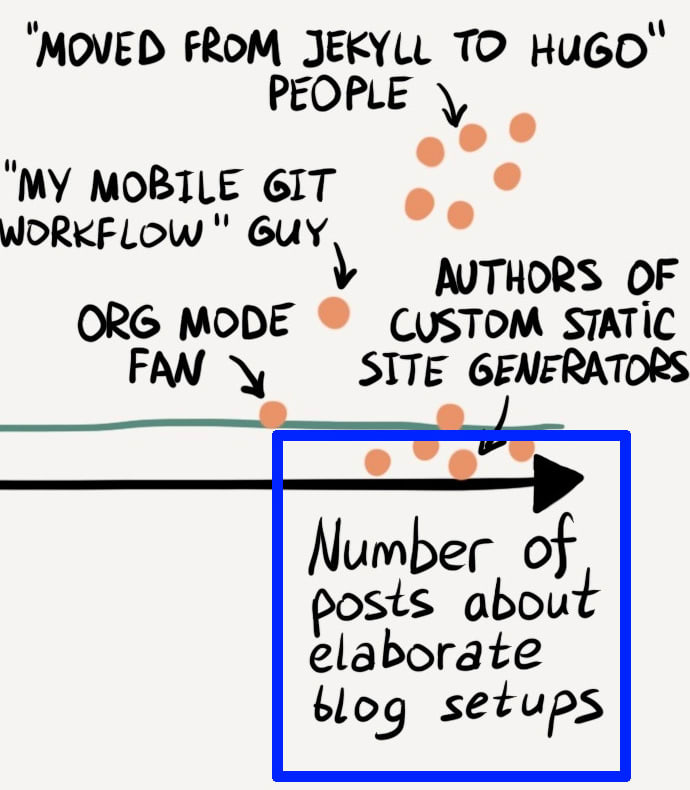 The #MyLife section stops here. The conclusion is that I experimented some solutions before to call people to join me here.

Why I recommend DevTo

The user experience when writing is very good (to be honest, Medium and Wordpress are even better, but it is good enough).

Why not using medium then ? There is no #perl tag and I feel like Medium is less a developer hub than DevTo.

There are also already some traffic here (at least as much as BPO) and some brand names.

The #perl tag is already administrated (by Gabor Szabo ! :))

The format is Markdown which is generally a good point (but not always, I can understand).

BPO is a "Perl ghetto" which is both good and bad. Good because this is a what some readers are actually looking for, and bad because of non exposure to programming world.

When you think that the biggest flaw of Perl is its reputation... 😟

DevTo greatly offers the best of both. Your blog posts are open to broad (technical) audience but the #perl tag fully recreates the "ghetto" use case from an reader point of view (and it really works well).

I'm not the first one to promote DevTo actually, I'm joining the call from Gabor Szabo, Joel Berger and Dave Cross to ask you to build together the future of Perl blogging on DevTo !

Whatever you decide, "Happy Perl !" and please keep posting so I can continue to read you 😄

How to add Google Analytics to your Hugo site

How to: Set up Distributed Monitoring with OpenNMS