XState is a JavaScript library created by David K. 🎹.

XState is a library for creating, interpreting, and executing statecharts. Statecharts are a formalism for modeling stateful, reactive systems. Computer scientist David Harel presented this formalism as an extension to state machines in his 1987 paper Statecharts: A Visual Formalism for Complex Systems.

My journey with XState started a year ago, after seeing David Khourshid's talk Infinitely Better UIs with Finite Automata. What he said reasoned with me. What really hit me, was that I was designing (UI state) in a bad way, that I made it myself complicated because I didn't know better. The highlighted example was a simple AJAX request, and to handle all of the possible scenarios the code becomes tangled real quick. David calls this the bottom-up (🍑🆙) approach.

What appealed to me in XState is that it felt familiar and as a nice extra, the code I saw from multiple demo's was that it was readable and easy to understand.
At first, I saw it as a declarative redux store, a store with a guard at the door to keep malicious types out of the store, instead of a store where the door is always wide open.
The only difference that was visible was that there were no reducers. With XState (or state machines in general), state is modified through transitions. The idea is slightly different, but the result remains the same, a new state. Now, after some proof of concepts I want to share what I like about XState.

While the examples were easy to understand, it was harder to write my first machines. Because it's easy to see what's going on in a machine, without much code, in a human-readable way, the complexity to create a machine is hidden. It was new to me to write code in such a declarative manner, and it took some time to get used to it. Once the syntax was familiar it became a whole lot easier to write a machine, what takes the most time now, is to draw the model of the state and the transitions.

XState has some resembles with redux, but they're not the same.
Instead of having one global store where you dispatch all of your actions to, XState has multiple smaller stores (Actors) to send events to. This architecture is called the Actor model. An actor holds state, can receive a message and decides what to do with the message, send messages to other actors, and create more actors.
The other difference is that a machine is really explicit, you can't end up in a bad state by accident. Whereas it's easier to find yourself in an invalid state with redux.
I believe having used a redux architecture before, certainly helped me to get started.

A nice benefit is that a machine is UI framework/library agnostic, it's not bound to a specific UI framework. It's possible to reuse the same machine in multiple UI frameworks, the difference is the view layer and how a user interacts with the view. All of the (business) logic is written once, in the machine. It lets you treat UI as an afterthought and this is what I hadn't thought of. That's why I wanted to create an experiment to create a machine and use it with Angular, React, Svelte and Vue. The table machine contains the logic of a table component.

The state visualizer of the table machine looks as follows: 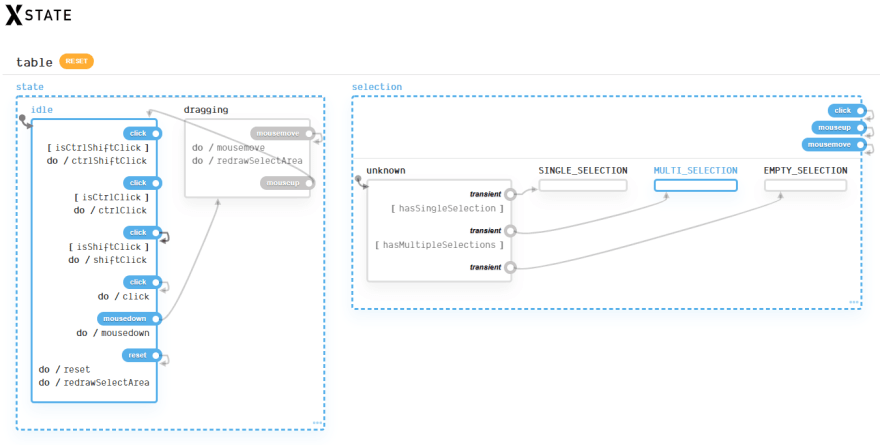 There's also a mousedown action, which transitions the state from idle to dragging. While the table machine is in the dragging state, mousemove will manage the selected rows and will also trigger a new render of the select box with its new coordinates.

On the right side of the picture, you can see the selection state of the table machine. Every click, mouseup and mousemove action results in a new state: SINGLE_SELECTION, MULTI_SELECTION, or EMPTY_SELECTION.

In the code we can use these states to show the selectbox or to disable buttons.

The code can be found on GitHub, or in the following sandboxes:

Thoughts on the demo project

It was a simple experiment, but I'm happy with the results. Once the machine was written it was easy to implement the machine across the different frameworks, even when I'm not fluent in all of them. The documentation has a section on how to use a machine within a framework, these examples provided guidance to get started. For React, there is even a @xstate/react library that has a useMachine hook, which does all of the heavy lifting. Based on useMachine, I created a Svelte store. For Angular (RxJS) and Vue, the documentation provided an example.

For my experiment, the table machine was 100% reusable, so I'm calling this experiment a success. The one thing I changed with each framework is how the table rows were getting selected (used to determine if the row was within the select box). The default implementation with document.querySelectorAll did its job but each framework has its own way to ref an HTML element. I don't know why I wanted to use the implementation of the framework, I just wanted to know if I could.

I'm happy with the code, if I would come back to it in a few months I'm sure that I would want to change it here and there but the important part is that it will be readably.

XState is not a replacement to redux, I still like my redux. They both serve different needs. I see XState as a perfect place to put the logic of components. If I would have to create the same table component but without XState, I would've ended up with some messy code that would be hard to comprehend.

The initial cost to set up a state machine might take longer in comparison to imperative code. In the long run, when more features are added and (last minute) changes are requested, a state machine brings you a solid base to write and maintain your code.

For me, the most important points to use XState or statecharts would be that it's declarative and explicit, it's hard to create invalid state. The nice extra's that you get with it, is the tooling around it and the portability across frameworks.

I Created A Simple 1 To 1 Meeting Tool