Update: @damagefilter wrote a more advanced tutorial regarding events in Unity. Go check it out here 😄.

¡Hola! My name is Juan Rodriguez. I am a Panamanian data & game developer and programmer based in New Zealand. This blog post was written for notGDC as I wanted to contribute some of my knowledge with the community. It is aimed towards programmers looking to get the most out of Unity, no matter the skill level. The initial stages will be fairly basic as I want everyone to understand this tutorial, so feel free to skip parts as you wish! (Or just grab the source code). The tools I used are Unity 2017.3.1p2 and Visual Studio Code.

In games, we often encounter situations where we want to notify objects about events that are happening without having to tie them together. Let’s consider the following situation. You have a UI system with:

When the user clicks the ‘Send Message’ button, you want to inform the UI controller that a new message has been sent. After this, you will replace the current message with the new one. Lastly, the input field will be cleared up.

Here’s a GIF of how the game will look like:

In order to achieve the desired functionality, we will approach the solution by implementing delegates. Delegates allow us to treat methods as variables, and they work like a mailing list. Subscribers will receive emails and can opt-out at any time. Note: You can subscribe as many methods as you desire. Events are very similar. The main difference is they add a layer of abstraction and protection on the delegate instance. This protection prevents clients of the delegate from resetting the delegate and its invocation list and only allows adding or removing targets from the invocation list (Source).

On the programming side, we are going to have two scripts: an event controller and a UI controller. The event controller will work as our mailing list, and it will have one event: OnMessageUpdateRequest. Since we want to replace our current message for the input field’s one, so this method will send out new message update requests.

The UI controller will have an UpdateMessage method subscribed to the OnMessageUpdateRequest event, and it will work as a listener. Also, to introduce you to UnityEvents we will play around with our Button and its capabilities, but we’ll get to that later. In essence: Delegates, Events and UnityEvents are very similar.

Inside Unity, create a new Scene and add the following objects to it:

Note: New UI objects will automatically add a Canvas and an EventSystem if your scene does not already have them inside. Why? because the Canvas displays UI elements and the EventSystem handles interactions from inputs that are not keys — They’re necessary to make any UI system work.

Your scene should look similar to this one:

Once you have finished setting up your scene, it’s time to create the following C# scripts:

These scripts have the same names as our previously created Empty GameObjects. They will be attached to them as components.

Once you create the class, it should look similar to this snippet:

Since we’re working with UI, we need to include the UnityEngine.UI library in order to access functionality of UI elements. Between lines 3 and 5, add the following code snippet:

After this is done, remove the Update method— We won’t be needing it. Now that we’ve got our UI library imported, we will proceed to create references to our UI objects in the scene. Inside the UIController class, add the following declarations before the Start method:

Now, we need to create two methods: SendMessageUpdateRequest and UpdateMessage. Inside UIController.cs, add the following lines of code:

If you’ve followed the steps correctly, your class should now look like this: Gist url.

Before going forward, we need to talk about UnityEvents and how we’re using them in this tutorial. If you click on the Button inside the canvas, you will see the following component: 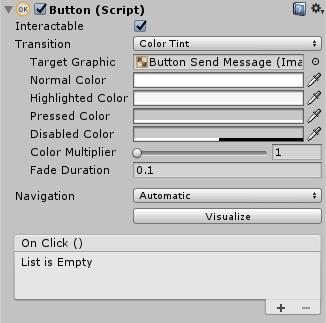 At the bottom of the component’s view, you see a On Click () field with an empty list and a +/- sign. This is a UnityEvent: They allow you to add methods of objects in the current scene to to it! So, whatever methods you add here will be called when the button receives a click (onClick).

If the method you assign is not in the same hierarchy as the component (In this case, our button), its reference might get lost. This can create many undesired scenarios where you have to reassign methods over and over again. To combat this problem, we will add a listener to our Button’s onClick event via code. Inside the Start method, add the following line:

The AddListener method allows us to subscribe any of our classes’ functions to the desired event; in this case, it’s onClick. The parameter taken is of type UnityAction, which is essentially anything that is considered a method according to Unity. Now, everytime you click the ‘Send Message’ button, the SendMessageUpdateRequest method will be called, no matter the contents.

Note: The AddListener method only accepts UnityEvents with no parameters, unless you add them via a Lambda expression.

Before going any further, we need to declare our delegate and implement its functionality.
Add the following declarations inside EventController.cs (and before the Start method):

Here we declare our delegate OnMessageUpdateRequestDelegate. In this part of the declaration, you specify the parameters it will have (no parameters is also valid). In our case, we are adding a string message.

We’re declaring OnMessageUpdateRequest as an OnMessageUpdateRequestDelegate. This is because delegates are methods treated as variables. Also, it’s static because we want to be able to access it from other classes without having to save a reference of the EventController (This is entirely optional, and it will vary heavily from your implementation/coding practices).

Now, replace the Start method for the following one:

Now that our EventController code is ready, it’s time to continue working with our implementation. We now want to subscribe our UpdateMessage method to EventController’s OnMessageUpdateRequest delegate. Inside the Start method, add this line of code:

Note: We did not use AddListener because delegates/events can simply add/remove listeners with the +=/-= operators. Also, a delegate can equal (=) one method whereas events cannot, they require use of +=/-= assignment operators.

Finally, we do follow the last steps: replace the message, and clear up the input field.

Final UIController.cs
If you followed all steps correctly, this is how your UIController class should look like: Gist url

Now, press play and cross your fingers. If all goes well, congratulations! If not, let me know what’s the issue and we’ll figure it out!

We have learned about delegates, events and UnityEvents in Unity. They are useful variables that can help overcome many programming challenges. I hope you have enjoyed reading this notGDC blog post.

Getting Started with the .NET MAUI Barcode Generator

Once suspended, timrodz will not be able to comment or publish posts until their suspension is removed.

Once unsuspended, timrodz will be able to comment and publish posts again.

Once unpublished, all posts by timrodz will become hidden and only accessible to themselves.

If timrodz is not suspended, they can still re-publish their posts from their dashboard.

Once unpublished, this post will become invisible to the public and only accessible to Juan Alejandro Morais.

Thanks for keeping DEV Community 👩‍💻👨‍💻 safe. Here is what you can do to flag timrodz:

Unflagging timrodz will restore default visibility to their posts.