About a year ago I wrote a short piece called On supporting foldables. Besides reminiscing about an obscure and obsolete class of the Android framework, ActivityGroup, I briefly introduced you to Jetpack WindowManager. The version I used was 1.0.0-alpha01. Quite a few things have changed since then. So, time to revisit.

To use Jetpack WindowManager, you need to add it as an implementation dependency in the module-level build.gradle file:

After that, you can access a new package androidx.window.layout. It contains just a new interfaces and classes. The main interaction point is WindowInfoRepository, an interface. Now you may be thinking Wait. How should I interact with an interface? The source file contains a companion object, which has an extension function to Activity. The documentation of windowInfoRepository() says:

So now that we know how to access an instance of WindowInfoRepository, let's see what to do with it.

The metrics describe the size of the area the window would
occupy with MATCH_PARENT width and height and any combination
of flags that would allow the window to extend behind display
cutouts.

WindowMetrics also belongs to package androidx.window.layout. Its bounds returns a Rect which describes the bounds of the area the window occupies.

The interface DisplayFeature is a description of a physical feature on the display. The documentation says:

A display feature is a distinctive physical attribute located
within the display panel of the device. It can intrude into the
application window space and create a visual distortion, visual
or touch discontinuity, make some area invisible or create a
logical divider or separation in the screen space.

Currently, there is only FoldingFeature. The documentation says:

A feature that describes a fold in the flexible display or a
hinge between two physical display panels.

We can find out quite a few interesting things about the fold:

a FoldingFeature should be thought of as splitting the window
into multiple physical areas that can be seen by users as
logically separate.

Here's how to make use of this in code. You can find the app on GitHub. 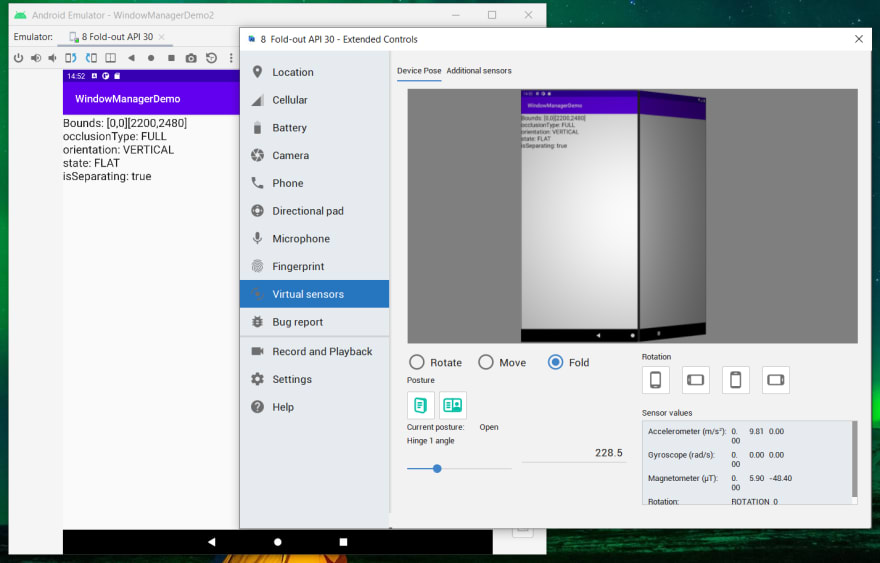 A year ago I praised Microsoft for supporting Jetpack WindowManager with their Surface Duo:

So far Jetpack Window Manager is quite small, yet extremely
useful. It is a great relief that Microsoft seems to be
utilizing this, because if there is something our ecosystem
should not face is fragmentation the the foldable area. Things
might have been more easy if Google had not chosen to completely
abandon the tablet market. And a foldable by Googles seems not
to be on the horizon either.

It looks like Google has finally rediscovered its love for large screens and foldables. Other vendors are pushing the foldable experience, too. And we might even get a Pixel Fold...

How to compile Rust command line tools for Termux

How to Declare Variables in Android String Resources?

Thanks for keeping DEV Community safe. Here is what you can do to flag tkuenneth: