This post assumes a basic understanding of genetic algorithms and the terminology associated with them, as well as a cursory understanding of recursion schemes; resources for both may be found scattered within the post. All source code can be found here. This post originally appeared on my blog, To Be Determined.

Getting a birds-eye view

Genetic algorithms are a type of heuristic in which candidate solutions to a problem are stochastically and incrementally evolved over time with the aim of producing performant ones; candidates, or individuals, are evolved with the help of genetic operators for selecting, manufacturing, and altering those individuals.

Let's start by defining some of the context in which our genetic algorithm should run. It would be nice to reference a configuration containing all the definitions and parameters we could need (like mutation and selection methods), utilize and update a random number generator for generating and mutating individuals, and log intermediate data. The RWS monad presents itself as a candidate for meeting these criteria, so let's wrap it in a newtype:

With this definition (which requires GeneralizedNewtypeDeriving), we can reference and update the PureMT random number generator with get and put, refer to our configuration with ask, and log intermediate data with tell.

One of my favorite genetic algorithm libraries, deap, allows you to keep track of a hall of fame -- a collection of the most-fit individuals. We can represent this collection as a continually-updated min-heap, where the worst-performing individuals at a particular point in time can be popped from the heap and discarded:

It would be helpful to have a means of tracking the best individuals over time, along with any other data that could be gathered with every new generation. For this, a snapshot data type:

Next we can define the data type containing all of our configuration parameters that we will then be able to reference in GAContext computations:

This configuration serves as the basic interface to the library. Once an instance of this data type is created, the genetic algorithm can do the bulk of its work.

The genetic algorithm will evolve our set of candidate solutions over time for a fixed number of steps, or generations.

Every generation of the genetic algorithm is determined by a step function:

The step function takes the current snapshot, along with the user-defined configuration to select a portion of the population to pass genetic material, crossover individuals from that subset to generate children, and mutate a portion of those children. With every pass, the Hall of Fame is updated with better-fit individuals, if they are found, and the subsequent snapshot is returned.

After parents are selected with the user-defined selectionMethod, the Vector of parents act as a seed from which children are produced. The generation of these children via crossover and their mutation are done in the same pass with a hylomorphism:

At this point, I refer the reader to the existing (and superior) resources on recursion schemes, if they are unfamiliar with the concept; I found Awesome Recursion Schemes to be helpful, particularly Patrick Thompson's series and Jared Tobin's blog posts.

Normal hylomorphisms have the type:

For our case, the monadic context of GAContext needs to be preserved. The haskell package data-fix offers the hyloM function, which instead relies on the monadic AlgebraM and CoAlgebraM types:

With the monadic hylomorphism in crossAndMutate above, a fixed list of mutated children is unfolded from a seed using newChild and folded into a vector of the same type using toVector. This yields the next generation of candidate solutions for the genetic algorithm.

Let's take a look at the newChild function:

newChild generates a new individual with the user-defined crossover function from two parents chosen at random from the group individuals selected to pass on their genetic material. We then apply the user-defined mutate function to the child and append that mutated individual to the in-progress collection of children. This is the anamorphic half of the hylomorphism.

The catamorphic half of the transformation is accomplished with toVector below:

and we can see that it is rather straightfoward, once we make a Corecursive instance of Vector to leverage the embed function:

In addition to the above instance, we will find later on, with our use of cata that defining a Recursive instance of Vector is also necessary:

Updating the Hall of Fame

Simple enough. Our catamorphism breaks down our Vector into a HOF; all it needs is the existing one into which we can insert the elements.

With this, we can update the current HOF by dumping the latest population into it and popping off minimally-fit individuals until the HOF is back at its original size.

Now that we have outlined the flow of the genetic algorithm, we need to provide an initial population. For this, we leverage the user-defined randomIndividual function, provided within the ever-present GAConfig:

We now have all pieces necessary for running the genetic algorithm for one complete generation. After some initial setup, we can run for the user-specified number of generations:

Using our configuration parameters we create an initial snapshot and pass that to a function that runs the step function for a set number of iterations equal to the number of generations. Let's take a look at the definition of runN:

it takes a function (in our case step) and applies that function n times, returning the final result.

Finally, we can run the GAContext, a newtype wrapper for the RWS monad, with runRWS and evalRWS:

With this, all the user needs to do is define their genetic operators and fitness functions for their own individual representation, and they should be able to call one of these three functions to run the genetic algorithm.

Let's see an example of it in action with a very simple problem: maximizing the number of 1's in a 500-bit binary string. Source can be found in BinaryInd.hs.

We'll represent the binary string as a list of Bool:

We can start simply by defining the fitness function for this individual representation, which is just the number of True booleans in the list:

Next we can define a function to create a new and random bit string of length 500:

We'll also need to provide a way to mutate our individual:

To cross two parents, we'll generate a bitmask that will inform us whether a given gene should be taken from the first parent or the second parent:

This type of crossover is called uniform crossover.

Our selection scheme is simple: take the best 20% of the population:

Almost there! It's time to run the genetic algorithm in our main function by instantiating a GAConfig with the functions we've defined:

We call the evalGA function on our configuration to yield the final snapshot containing the hof. We can log the progress of the genetic algorithm by printing the logging messages written with tell and logFunc.

The logHOF function puts the scores of the HOF into CSV format for easy graphing:

And here we can see how the GA improves fitness across generations: 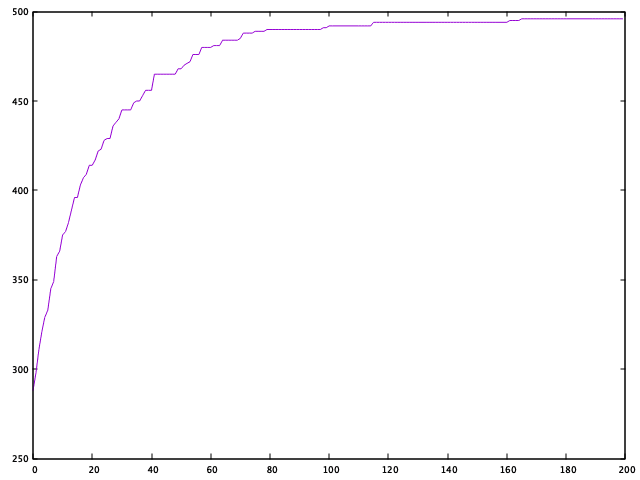 We can see that the GA is does pretty well for our little problem, making it most of the way towards an optimal solution within the first 100 generations. Not bad!

We've prototyped a library that can allow us to see if our given (and contrived) problem could stand to benefit from a genetic algorithm. I realize I've glossed over some details here, such as the randomD and randomBool definitions; if you want code that compiles, you'll need to consult the source.

I also briefly mentioned the resources for recursion schemes, but if you'd like more examples (namely with cata, cataM, and anaM) I've created a recursion-scheme-based analogue to BinaryInd in BinaryIndRec.hs.

If you've spotted any errors or have any critiques or want to provide constructive feedback, please leave a comment or reach out to me through david.anekstein.public@gmail.com -- I'll be sure to give you credit if your suggestion affects the post. Questions also encouraged!

ChatGPT is at capacity right now; yes, it is really annoying

Once suspended, tobedetermined will not be able to comment or publish posts until their suspension is removed.

Once unsuspended, tobedetermined will be able to comment and publish posts again.

Once unpublished, all posts by tobedetermined will become hidden and only accessible to themselves.

If tobedetermined is not suspended, they can still re-publish their posts from their dashboard.

Once unpublished, this post will become invisible to the public and only accessible to David Anekstein.

Thanks for keeping DEV Community 👩‍💻👨‍💻 safe. Here is what you can do to flag tobedetermined:

Unflagging tobedetermined will restore default visibility to their posts.