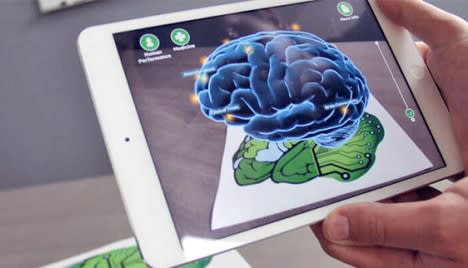 Educational innovation is crucial in our modern society. Many people face challenges learning simple or complex topics, and according to Grabmeier, Kaltofen, Weispfenning (2012), visualization is a potential solution to help people understand things better. AR (Augmented Reality) enhances the learning capabilities of an individual and could potentially innovate traditional learning practices. Contemporary AR technology utilizes information systems with cameras, such as a smartphone or PC with a webcam. It creates an illusion to the user by rendering a virtual object on the device's screen and aligns it with the physical world. AR technology has three characteristics: It blends both real and virtual worlds, renders in three-dimensional (3D) space, and allows real-time user interaction. Unlike VR (virtual reality), AR technology does not entirely immerse the user into a synthetic environment but enables him or her to perceive computer-generated objects in the real world (Azuma, 1997).

A brief history of AR 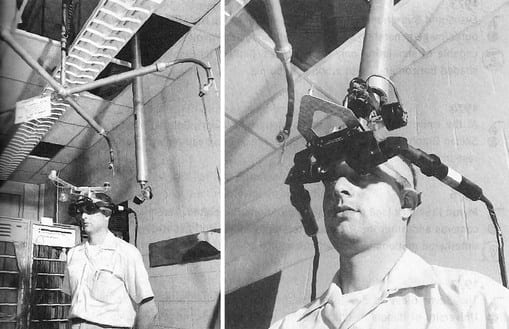 The first AR system was introduced in the 1960s. Ivan Sutherland, a computer graphics pioneer and his students at the University of Utah and Harvard University designed the first AR prototype. The AR system utilized two tracking systems called the ultrasonic tracker and mechanical tracker. These tracking systems were embedded into a head-mounted display (HMD) with optical see-through capability. Because computer systems back then were not powerful enough to process sophisticated computer graphics, only wireframes were rendered in real-time (Sutherland, 1968). Since then, AR technology has been continuously developed and used by major institutions for education, training, visualization, and other purposes. The term 'Augmented Reality' was coined in 1990 by a retired Boeing researcher named Tom Caudell.

Many experts with diverse backgrounds and areas of expertise have utilized AR to teach a gamut of courses from K-12 to higher education.

AR in books. Using the marker-based AR approach, Books can harness the power of AR technology. Billinghurst, Kato, & Poupyrev (2001), had a project called "The Magic Book." The AR book is an enhancement of the traditional "pop-up" book that is often found in fairy tale books. To use the AR book, the reader must use a see-through device such as a smartphone with AR software installed so he/she can see the interactive 3D objects.

AR in astronomy. Google Sky Map is an Android app that uses a see-through display to present digital information to the viewer when browsing constellations. According to Shelton's (2002) study, teachers used AR technology in an astronomy class to study the relationship between the sun and earth.

AR in biology. Teachers could utilize augmented 3D models to study human organs. A good example is the Human Anatomy Atlas app. This app is ideal to use when a medical professional has limited access to a lab with cadavers or specimens. With the use of a smartphone, he or she will be able to dissect virtual models such as eyes, heart, lungs, or brain.

AR in chemistry. According to Singhal, et al., (2012), they used an AR system called Augmented Chemistry and used it as teaching material on various students. Their goal was to teach the VSEPR (Valence Shell Electron Pair Repulsion) theory through a 3D visual learning approach. Based on their findings, their Augmented system effectively helped the students understand the theory by presenting visualizations of the spatial patterns of different types of bonding and bond formation between molecules and atoms.

AR in physics. The literature of Chae and Ko (2008), bridged the gap between AR and physics. They used a physics engine called ODE (open dynamic engine), which contains a library of software code designed for physics. The engine made it possible to integrated physics-related properties into virtual objects. Although it was challenging to integrate these two technologies, the project was successful and able to demonstrate various physics concepts through AR.

AR in mathematics and geometry. Not everyone can easily understand math concepts, and it is no surprise that AR technology could help people understand math through visual learning styles. With AR technology, math educators could encourage more students to study math lessons. An excellent example of a math AR application is the GeoGebra AR app. This app helps math educators teach math in the real world in a more interactive and fun way. It uses markless AR technology and numerous examples of augmented geometric shapes that can be loaded onto any flat surface.

Hope this post has provided you with some helpful insights. I'd love to know your thoughts about the future of AR! Feel free to leave a comment down below.

Shelton, B. E. (2002). Augmented reality and education: Current projects and the potential for classroom learning. New Horizons for Learning.

Anatomy of The Emoji

Hi! I'm Israel, and I'll introduce you to my corner of the web

Insights on how to teach students a difficult subject

Tommy
Life-long learner, loves technology, and b̶r̶o̶k̶e̶n̶ ̶k̶e̶y̶b̶o̶a̶r̶d̶ ̶c̶o̶l̶l̶e̶c̶t̶o̶r̶
Why quitting job articles are so popular?
#webdev #discuss
How to tell a Junior Dev that what they've done is wrong?
#career #discuss #help
Have you considered starting a company?
#discuss #career