I describe how and why I built a Twitter bot in Python that converts tweets into beautiful expressions. I also define what is a bigram poem and propose why it should be a literary creation. All code is available on my Github page.
Liquid error: internal

During my third year of graduate school I began research on text analysis and how to apply this to natural language processing (NLP) in social media. I presented a research proposal where I wanted to apply some data mining and NLP techniques using real-time information from Twitter. I gave an example during the presentation on how the text from one tweet can be converted to a list of bigram strings (more on this later). Here was the slide: 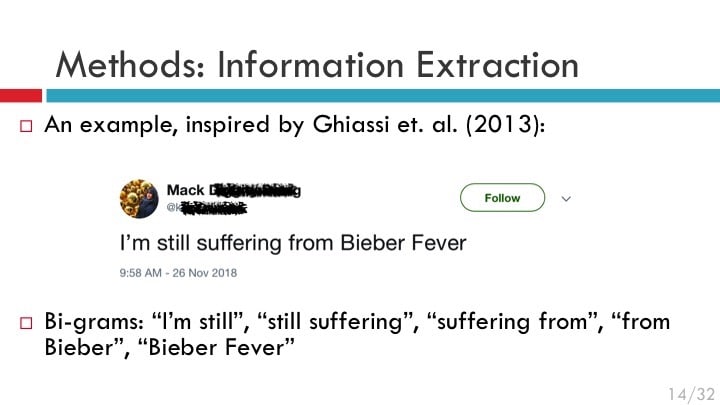 I read the list aloud and commented on the poetic sound it had. I said that if I don’t become an economist then maybe I will have a future as a slam poet where I read tweets as some kind of bigram poem. My classmates laughed at the passing joke.

But I later got to thinking, “why not?”.

The purpose of the project is the novelty of creating a Twitter bot that rewrites public tweets into bigram poems. It allowed me to improve my coding skills and become familiar with the Twitter API. It might even be educational by teaching others an NLP technique, but probably not. I can however claim that bigram poems did not exist before this humble blog post.

My contribution through this project is to propose the use of bigrams not as a mere means of text analysis, but as a form of poetic expression. I build a function that takes utilitarian sentences and rewrites them into concise poems. This shows how common language has the capacity to sound elegant. Either that or it is merely a cute little project.

What is a bigram poem?

Good question! A bigram poem is any phrase converted into a list of consecutive word pairs.

Context is very important to understand the meaning of words. If an online review describes a restaurant where “the food is not good” we as humans easily understand the negative connotation. If text analysis only considers the frequency of individual words, then a computer would likely interpret the word “good” as being positive sentiment and consider the phrase also as positive. A common remedy to this problem is to break the phrase apart into n-grams, or groups of n-many consecutive words. A bigram is one such example where n=2. A bigram of the previous phrase would thus read:

It is easier for a computer to analyze these and appropriately label the word pair "not good" as negative sentiment.

The first step to building a Twitter bot that sends out bigram poems was to write a function that automatically converts phrases into bigram poems. The below Python code describes the process:

I will elaborate on a few of the above steps for those without programming experience. First, I discard select punctuation that obstructs the flow of the poem. I next truncate the phrase into the first eight words to ensure the desired output is short and sweet. Finally, I split the phrase by word and convert into a list of bigrams.

I test the function using a list of short quotes from the TV show Arrested Development. I then randomly select a quote from the list and covert it into a bigram poem. Three examples are shown below.

I set up a Twitter account with the handle @BigramPoetry, apply for developer status on the platform and am accepted. I build the Twitter bot in accordance with the site’s automation rules that explain:

"Provided you comply with all other rules, you may post automated Tweets for entertainment, informational, or novelty purposes. As a reminder, accounts posting duplicative, spammy, or otherwise prohibited content may be subject to suspension."

To adhere to such rules, I clearly explain the intention of the project in the account bio and tag my personal account for ease of communication. To prevent the bot from being spammy, I restrict only one tweet to be sent out every fifteen minutes.

I am now ready to connect to the Twitter API and do so here using the Twython wrapper:

Note: I do not share the private access information and instead have this saved on a separate json file. See instructions here on how to securely save API credentials.

My first consideration of source material was to use tweets from a curated list of actors, musicians, politicians, entrepreneurs and athletes. This had the advantage of having a large group of followers but the disadvantages of infrequent tweets and the ephemeral nature of celebrities who may quickly lose their relevance. I also considered following trending topics, but this violates the Twitter automation rules.

The solution then was to follow a specific hashtag that will target users who would find this project of interest. My first choice, #NLP, is a poor candidate since it is confused with other acronyms and is not frequently used on Twitter. I instead opt to use tweets that include '#machinelearning' as my corpus.

With source text in mind and API connection established, I can now collect the desired tweets in real time and apply additional formatting, as shown here:

I avoid foreign language tweets as well as retweets to ensure I am working with original content that is comprehensible to the target audience. After a series of testing I individually correct for select edge cases where the poem formatting was obstructed by some kind of unconventional character or spacing. Finally, I format each tweet to have a title and signature line.

Pushing the tweets out

Once incoming tweets have been converted to a bigram poem and formatted as desired, they are ready for the twittersphere. I push the tweets out with this:

Note before how the streaming function disconnects after sending out a suitable tweet to prevent incoming tweets from damming up. Here the while True statement and time delay restart the stream to post a tweet every 15 minutes to ensure that only the most recent tweet meeting the defined criteria will be used. The try and except statements together ensure that the stream will not be permanently interrupted when an error occurs.

While testing my original code the account was flagged by Twitter as being too spammy. The app was muzzled and lost API writing privileges until it was fixed. Here is one tweet in question:

This is very good. twitter.com/jalammar/statu…
Jay Alammar جهاد العمار @jalammar
A Visual Intro to NumPy and Data Representation New blog post! A visual look at the workhorse of data analysis, machine learning, and scientific computing in the python ecosystem. We also look at how tables, images, and text are represented by numbers. https://t.co/fTnw1XfYy1 https://t.co/WMLQA23fni

A Bigram Poem inspired by @exactlyAllan:
This is
is very
very good
-Allan Enemark

It turned out the issue was in the unsolicited @mention of the user as prohibited in the automation rules. I remove the '@' from the title line and for good measure also include it in the list of rejected characters within the bigram function. This means that any tweet including an @screen_name after going through the function will be reduced to just their screen_name.

The final step now is to allow the Twitter bot to continuously run and not depend on my laptop. After a two-day online training, I was able to understand the basics of Amazon Web Services (AWS). I launched an application with Elastic Beanstalk that established a server instance to run the code and allocated cloud storage for keeping record of code deployments (EC2 and S3 respectively, for those in the know).

I am deeply satisfied with the results, shown below in a non-random sample of before and after tweets. Some poems come out a bit odd, but all in all I am impressed with the elegance of composition. Seriously, read them aloud and hear their poetry!
Liquid error: internal

A Bigram Poem inspired by DataScientistFr:
Who Let
Let the
the Dogs
Dogs Out
Out Ask
Ask Megvii’s
Megvii’s Nose
-Data Scientists

I would like to first thank my friend Seth Yost for being a sounding board to this project and for tackling some AWS kinks. I also am appreciative of Emily Cain for her blog post as well as Jared for his post that both outlined aspects of the process and offered sample code.

For those looking to explore more with the Twitter API in Python, I recommend this guide which I admittedly wish I had discovered before the project was already finished. Finally, check out Botwiki for a list of articles, sample bots and guides for how to build your own.

The genesis and architecture of my CyberGordon project

Thomas J. Weinandy
Supplying your Data Science demand while researching Digital Economics
5 Small and Hidden React libraries You Should Already Be Using
#webdev #javascript #react #productivity
top 26 Interviewer Questions You Should know
#webdev #programming #career
You're running an online conference but get called out for having an all-male speaker lineup 2 days prior. Yo, What do you do?
#discuss #serverless #aws

Once suspended, tomweinandy will not be able to comment or publish posts until their suspension is removed.

Once unsuspended, tomweinandy will be able to comment and publish posts again.

Once unpublished, all posts by tomweinandy will become hidden and only accessible to themselves.

If tomweinandy is not suspended, they can still re-publish their posts from their dashboard.

Once unpublished, this post will become invisible to the public and only accessible to Thomas J. Weinandy.

Thanks for keeping DEV Community 👩‍💻👨‍💻 safe. Here is what you can do to flag tomweinandy:

Unflagging tomweinandy will restore default visibility to their posts.