One of the main themes that quickly jump at you while using Flutter is that everything is a widget. This series aims to help beginners understand this simple yet powerful concept and introduce them to basic widgets in Flutter.

To help us in this journey, I built a Twitter Mobile Clone App using only the inbuilt widgets that come with Flutter. You can find the code at https://github.com/topeomot2/twitter-ui-app

In Flutter, Widgets are the building blocks for other Widgets and the UI.

The technique used for this is Composition. You use widgets to compose other widgets and your UI (which can be seen as one giant widget) is composed of widgets too. We will use 2 examples to illustrate this.

To illustrate this, below is a section of the widget tree for the Twitter Mobile Clone App. 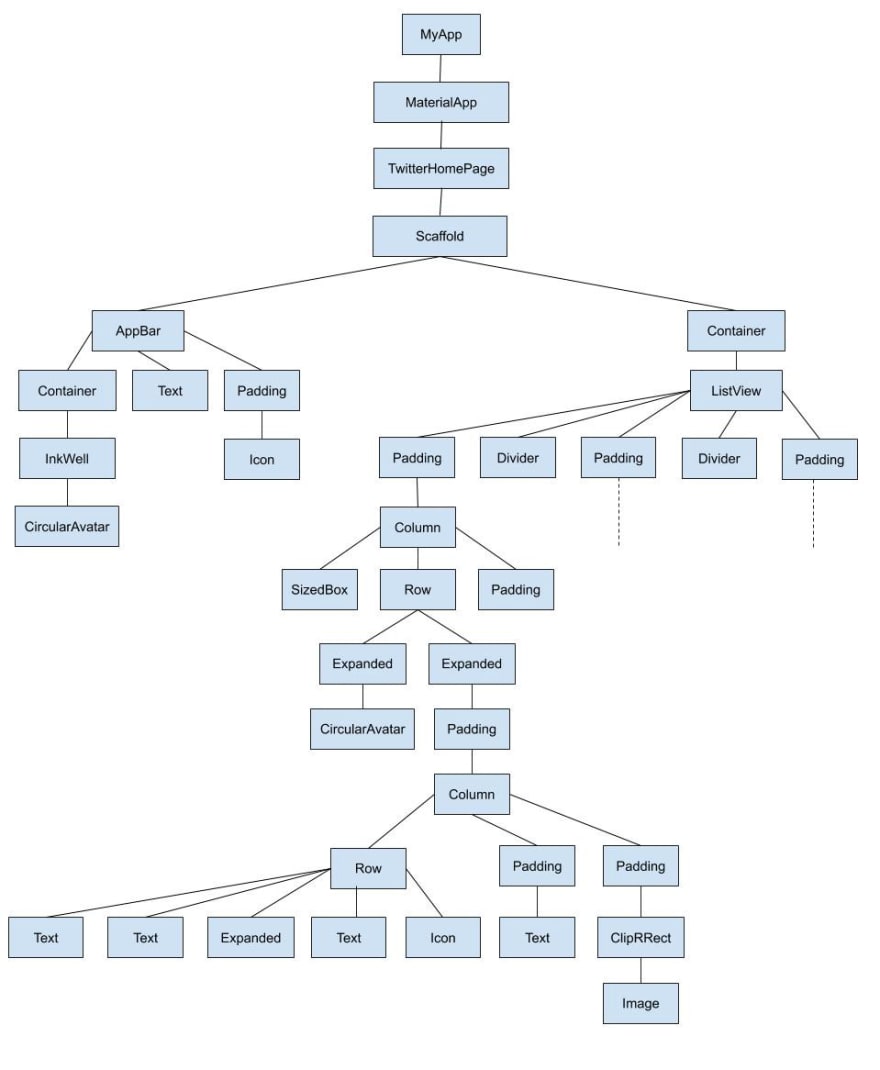 As I said, we will be going through all these widgets in this series.

The RaisedButton is one of the Button widgets inbuilt that comes with Flutter in the MaterialApp library. Below is the constructor code for a RaisedButton.

As an Android Developers who use Java or Kotlin, this composition method in Flutter which leads to a lot of layers in your UI hierarchy which is something that is frowned upon when developing in those languages. In developing with Java and Kotlin with the Android ADK we aim for shallow hierarchy because the greater the number of layers in your UI hierarchy the slower thee app becomes.
Flutter does not suffer from this type of limitation. How does Flutter manage this?

Flutter has a layout algorithm that builds the UI from the Widget Tree at sublinear performance. The worst-case scenario will be Linear O(N) during the initial layout and sublinear (< O(N)) for subsequent UI update where N is the number of widgets.

The combination of the sublinear layout algorithm other factors means you should not be scared of composing widgets.

As you aim to become a better Flutter developer, keep in mind, widgets are the building block, composition is the technique for creating a building from the blocks.

The different strategies to building a cross-platform app

How to Add Navigation Drawer in Jetpack Compose?

Localization Made Easy: Generate 100+ Languages with Single Click in Flutter

Once suspended, topeomot will not be able to comment or publish posts until their suspension is removed.

Once unsuspended, topeomot will be able to comment and publish posts again.

Once unpublished, all posts by topeomot will become hidden and only accessible to themselves.

If topeomot is not suspended, they can still re-publish their posts from their dashboard.

Once unpublished, this post will become invisible to the public and only accessible to Temitope Omotunde.

Thanks for keeping DEV Community 👩‍💻👨‍💻 safe. Here is what you can do to flag topeomot:

Unflagging topeomot will restore default visibility to their posts.