Subscribe to The Grind to get the best tech and programming stories of the week delivered to your inbox.

Microsoft has publicly stated that they are moving away from C++ in favor of the equally highly performant Rust language. The announcement follows similar adoption at other tech giants including Apple, Google, Dropbx, Cloudflare, and AWS

Transcompilation — translating code from one language to another — has been a longstanding necessary evil of developing applications for multiple platforms, or porting apps from one platform to another. Facebook’s new tool could be the beginning steps in creating a Rosetta Stone of code, where languages can seamlessly be swapped with each other.

OpenAI launches an API to commercialize its research (5min 13sec)

The company OpenAI has created an API, which constitutes a big step towards their goal of providing the power of natural language processing to the entire development community. You can request to join the API’s waitlist here.

Honda was forced to suspend factory operations in multiple plants in the US and abroad due to a ransomware infection, echoing a similar attack against the company in 2017 using the now infamous WannaCry worm.

Turns out the cost of your last commute might have as much to do with your skin as much as the distance or time of day you traveled. An interesting morality tale about what can happen when machine learning is applied to social data.

The Internet’s most important — and misunderstood — law, explained (17min 57sec)

When Twitter made the decision to start fact checking Donald Trump’s tweets recently, Twitter CEO Jack Dorsey took a bold stance against misinformation. Trump hopes to seek legal revenge by attacking the 1996 law Secion 230, which gives social media companies virtually zero accountability for the content on their platforms. But interestingly, Joe Biden feels the same way as Trump does about this law. Take a deeper dive to understand what this law is, how it might change, and how these changes could affect you.

Pentagon Documents Reveal The U.S. Has Planned For A Bitcoin Rebellion (2min 46sec)

Official documents from the U.S. Department of Defense describe a Robin Hood-esque organization called Zbellion, that converts stolen money into bitcoin. They then turn it around to fund a global anti-establishment movement.

The Internet Archive is a Non Profit organization, and the site hosts a treasure trove of culture artifacts of all sorts, including millions of movies, books, software, and audio recordings. When it temporarily suspended the waitlist feature to help address the problem of COVID-19 driven shut downs of public libraries, publishing giants Hachette, HarperCollins, Penguin Random House, and Wiley sued over it. And they’re seeking damages at $210,000,000,000 (that’s two hundred and ten billion dollars). That would be game over for the Archive.

Facebook is making a big push to fund startups, hoping to get the jump on the next big thing before it blows up.

Zoom shut down Chinese activists living in America, for holding a meeting to remember the Tiananmen Square Massacre. This was likely a move to appease China’s law prohibiting the discussing of the famous pro democracy Tiananmen protests that occurred in 1989.

I like dark mode. At this moment, I’m tying this on my laptop on an app using dark mode. Even though I haven’t come back from the dark side just yet, this short, educational read has me second guessing this choice for the first time since dark mode has been an option.

From a few years ago, but still highly relevant today. Most of us have experienced burnout before. Understanding how to notice it, and how to handle deal without before it’s a problem, can save you from a boatload of stress, illness, fatigue, and premature gray hairs. Solid strategies and great practical advice here.

This site is a wonderful tool for generating a set of icons for your next project, free of charge. Customize size, border density and color to match your design or idea.

Grid.js — Grid.js is a Free and open-source HTML table plugin written in TypeScript

Discuss: Which tools have made you a better programmer?

A great thread, where developers from all walks of life discuss the tools that got them to where they are now. It’s a great conversation to learn about a new tool that might make a big difference for you, or share what tools you’ve benefited from over the course of your career.

We have no idea if the AURAFLOW 5000 sunglasses really alter your mood (the company promises it’s been “scientifically proven” 😂), but we are sure that Futuremood knows how to make an eye catching website.

The portfolio of digital designer Jens Nielsen has a beautifully minimalist modern design. He uses the glamorous Bigilla font to great effect, set within a restrained, black, and yellow palette. Attractive and elegant.

Meme of the Week 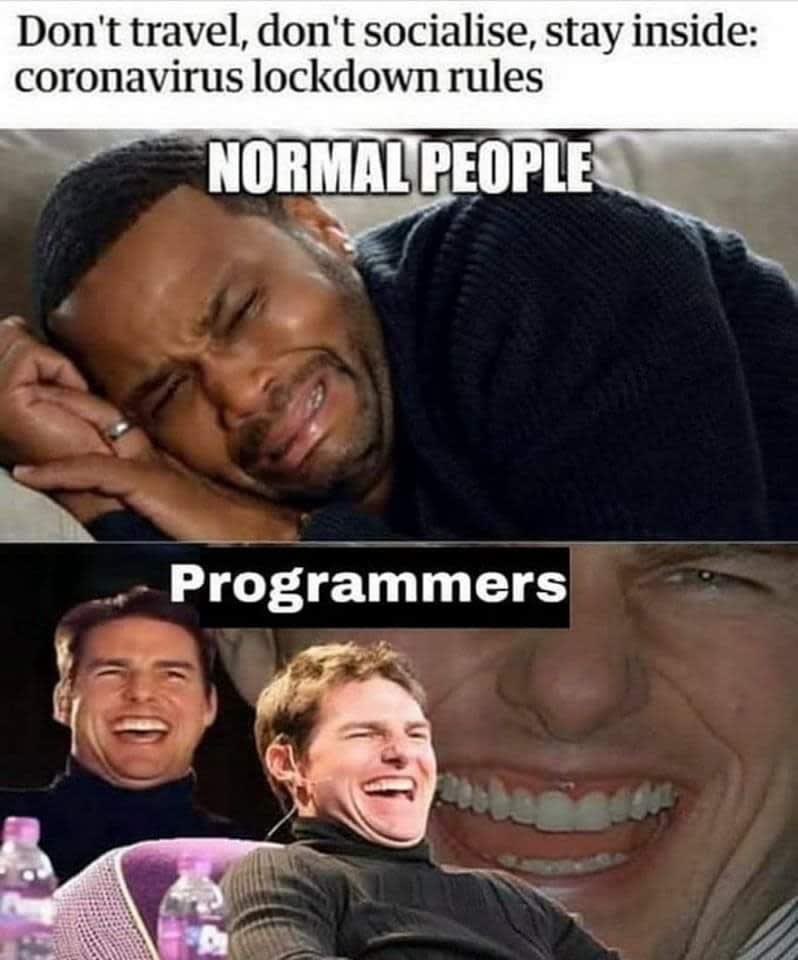 Does anyone do social distancing better than programmers? Probably not. We’ve had a lot of practice, and we’re up to the challenge. 💪🤓

Subscribe to The Grind to get the best tech and programming stories of the week delivered to your inbox.

Once suspended, treyhuffine will not be able to comment or publish posts until their suspension is removed.

Once unsuspended, treyhuffine will be able to comment and publish posts again.

Once unpublished, all posts by treyhuffine will become hidden and only accessible to themselves.

If treyhuffine is not suspended, they can still re-publish their posts from their dashboard.

Once unpublished, this post will become invisible to the public and only accessible to Trey Huffine.

Thanks for keeping DEV Community 👩‍💻👨‍💻 safe. Here is what you can do to flag treyhuffine:

Unflagging treyhuffine will restore default visibility to their posts.