Hello, ultra devs! 👋🏻⚡️
Today I would like to talk about Replication and how it works in MySQL.

Let's start from the beginning. If you know what replication is, feel free to skip the next chapter.

Basically, a replication mechanism means storing some copy of data on multiple machines. "How is it different from backups?" you may wonder. Replication is a bit more than that. When a backup is just a snapshot of the data in a certain time, replication helps you to not only keep the copy of the data in real-time ensuring availability but also facilitate the overload on the database providing both reading and writing to the client and therefore increase throughput. Also, replication helps you to distribute your data storage across the globe decreasing the response time for clients from different parts of the world.

In this article, we will be talking about leader-based replication, and to continue our journey into this world, it's required to introduce several terms:

Here is a simple example of single-leader replication with two followers:

How it works in MySQL?

Ok, now we know what replication is, but how it actually works in MySQL? How data got transferred from leader to followers and how MySQL keeps the consistency between them?

Imagine the situation that dev.to is powered by MySQL. You just wrote the article and clicked on the Publish button. Here is what happens: 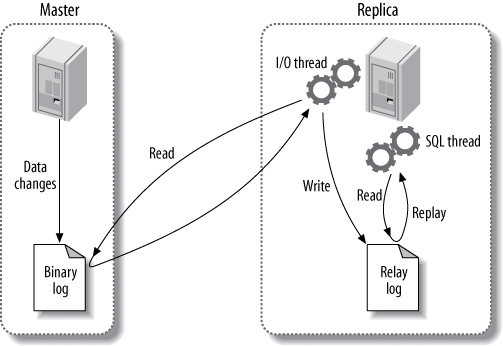 As you can see, to synchronize relay log with leader's binary log, MySQL starts a worker thread that is called I/O follower thread. It's basically an ordinary client connection to the leader that starts reading its binary log.

Digging a bit into details, we can ask a quite reasonable question: in which format do binary log and relay log store the data?

So, as it's clear from the name, statement-based replication records the whole query that changed the state of the data in binlog. So, when a follower decides to synchronize its data with the leader, it copies the query and replays it by executing this query and applying changes to its own data.

This kind of replication is very easy to implement and has multiple advantages:

without having an index on the status field, and after pressing 'Enter' you just went for a tea (a hypothetical situation, I know, you probably drink coffee). The query got executed on leader, consuming all available CPU, and then follower picked up the baton, copied the query to its relay log, and cheerfully ate all CPU as well;

Compare to Statement-based replication, Row-based replication stores the actual data changes in binary log, but not the query. So, when a follower replicates the data, it doesn't execute the query, but applies the changes to each record it was applied to on leader.

Let's consider the advantages of this approach:

Looks nice, that's what we were expecting from replication, right? But along with the advantages come disadvantages:

Considering the fact, that the posts table has about 1.000.000 of Published posts, this query becomes quite expensive, since it requires storing 1.000.000 of changes in binary/relay log files;

Now we are fluent in replication process language. Everything is clear. Hold on, on the picture of replication example, we can see one leader and two followers. Can we do things differently?🕵️‍♀️ 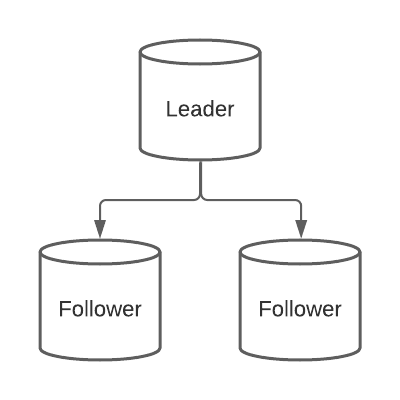 This type of replication is the most common one. It is useful when you have a lot of reads but not that many writes. You can distribute users reads among followers load-balancing them and therefore providing better response time. With this replication topology, you can easily add one more follower to it. Also, this topology prevents a lot of problems that multiple leaders topology have (will be described in Leader-leader replication), since it has only one leader.

As it is visible from the picture, this topology involves two leaders.

This topology is useful when you have different data centers in different locations and you need to provide fast writes to both regions.

But with this advantage comes a great cost. Suppose, we have a table post_statistics and you just realized that the number of posts with Published status is triple more than it's actually written in table and you decide to fix the situation. So, you connect to MySQL and execute the following query:

Meanwhile, somebody from a different part of the world just published his/her first post (just like me) and triggered the following query to be executed:

Suppose, the original number of posts was 10k. Due to replication lag, databases ended up with two different numbers: 30.001 and 30.003. And no errors were thrown.

This is a big disadvantage of this topology, and in practice, it brings more problems than advantages. But if you ended up with this topology, it's better to add few more replicas to it 😁 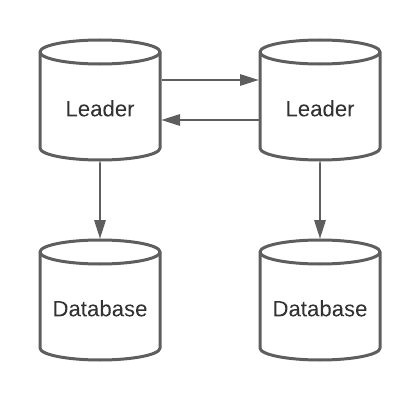 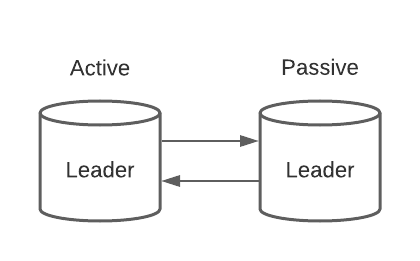 There are many other topologies that are supported by MySQL:

And many others. You can choose the best topology that fits your purposes or create your own. This is the list 👆🏻 of the most common topologies used in MySQL.

Replication is a mechanism of having a consistent copy of the data storage. It provides:

Leader-based replication consists of leader and follower. Both of them have their own journal of changes: binary log and relay log.

There are two types of replication:

There are multiple topologies for replication:

That's it! Thank you for your attention! I hope you liked this post 😌

Once suspended, tutelaris will not be able to comment or publish posts until their suspension is removed.

Once unsuspended, tutelaris will be able to comment and publish posts again.

Once unpublished, all posts by tutelaris will become hidden and only accessible to themselves.

If tutelaris is not suspended, they can still re-publish their posts from their dashboard.

Once unpublished, this post will become invisible to the public and only accessible to Klim Markelov.

Thanks for keeping DEV Community safe. Here is what you can do to flag tutelaris:

Unflagging tutelaris will restore default visibility to their posts.