This is the first post in a series of setting up a react native UI library development foundation. Please refer to the link collections here Series: The Ultimate React Native UI Library starter repo for the full series overview.

In the first step of setting up the ultimate UI library boilerplate we go through making a new init, and installing Storybook.

If you are completely new to react native please follow the steps on the official react native docs to get your environment setup.

This will set up a fresh new react native project for you.

Make sure that the installation was successful by running both the android and iOS builds of the project before going ahead. I always take things step by step, so when things bug out then I know exactly where it worked and where it broke.

so for the people who forgot etc. here's the commands for doing so.

Using the automated setup as recommended by the docs here: Storybook quick-start guide

inside the root folder run the following command to initiate the installation:

When prompted if you want to install the react-native server accept.

After that open up your code editor and we will do the final steps in rendering storybook out on the screen.

inside the folder ./storybook open up index.js and we will add in our app name. You can either add it manually or you can be lazy as me and import the app name from app.json in the root folder. It has the benefit that if the app name changes you won't need to go in and change it manually.

Below is the result:

after we have added our app name to Storybook, inside of the root folder, we open index.js. This is the default entry point for our React Native app.

Inside of ./index.js comment everything out and add the following line:

This will render storybook as the first entry to your app, but later if you want Storybook to be rendered inside of a tab-view or another type of screen you'll just add storybook as any other component. More on that in the Storybook docs.

Now when you run the following command we can start up our React Native development server on port 7007:

It will give you the following screen: 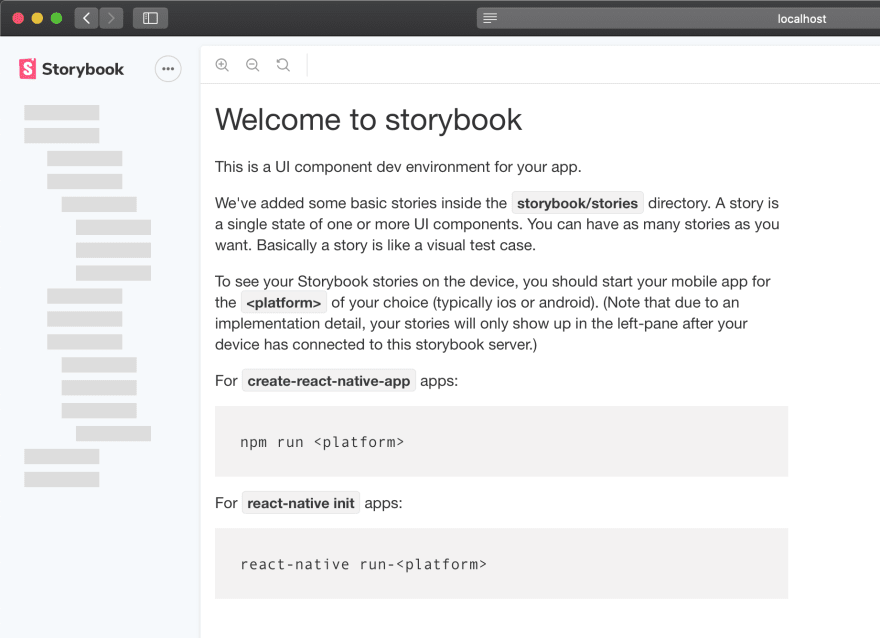 Hold your horses you might say "That menu-bar never stops loading!" and you'll be right. This web interface is trying to connect to a iOS or Android emulator.

so run an emulator and if you put the browser window and the device side by side it should look like:

If you play around with this you notice that you can control the view which is being shown in the emulator / simulator from the browser. Neat right! ⭐️ It's a nice feature which makes navigating your component library on a device very fast and easy.

As your project grows you don't want to add stories into storybook manually as is the default. It's tedious and you'll spent time "debugging" why your component does not show up.

I really like this project because after setting it up I don't have to worry about adding any new stories every again.

Open up ./storybook/index.js and modify the entry where the stories are loaded from:

The last step in setting up react-native-storybook-loader is configuring in which directory it should look for stories.

Open up package.json again and add a config field:

I wan't it to look inside of the ./src/components directory but you can set it up to look in a different folder, or even add more places it should look in by adding them into the searchDir array. If you change the other fields you'll need to change your other config to match accordingly.

To test that this part of the setup works lets add a test component and check so everything works.

I'm making a new directory called src and inside of the directory I'm adding a folder called components -> ./src/components

and in these files I'm adding two new files called TestComponent.js & TestComponent.stories.js and let's code a test component and add a story for storybook.

and a story for storybook

Note that while using react native we have to use the storiesOf api from Storybook.

Let's test it out on your device of choice!

This will first run the react-native-storybook-loader script. It will output a reference to all the files matching the pattern *.stories.js inside ./src/components to ./storybook/storyloader.js and load them into Storybook. After that it's running storybook as normal.

Here's what you should see:

Hopefully you'll see the test component on the screen.

What did we accomplish:

You can find the finished repository for the whole series on Github: react-native-storybook-boilerplate

Consider giving it a star or raising an issue, PRs are most welcome!

Once suspended, ugglr will not be able to comment or publish posts until their suspension is removed.

Once unsuspended, ugglr will be able to comment and publish posts again.

Once unpublished, all posts by ugglr will become hidden and only accessible to themselves.

If ugglr is not suspended, they can still re-publish their posts from their dashboard.

Once unpublished, this post will become invisible to the public and only accessible to Carl-W.

Thanks for keeping DEV Community 👩‍💻👨‍💻 safe. Here is what you can do to flag ugglr:

Unflagging ugglr will restore default visibility to their posts.