To verify our CLI installation

If you don't have a Heroku account, go ahead and create one.

Why do we need a git repository?

→ Initialize the git repository, in the directory which contains manage.py

→ Add everything we have in our app, to the git repository.

Linking our git repository with our Heroku app

Let's test our app server. Locate the wsgi.py file in your main app directory, in my case my main directory is 'tutorial'.

This command doesn't run on windows because gunicorn is incompatible with windows. For more information → here.

It'll start a server on our localhost port 8000.

At this stage we are ready with our app to be deployed, but the thing is

In the main directory which contains 'manage.py', we create Procfile

Now we'll have to write commands which heroku should execute on app startup, this includes starting up app server.

This file will contains all the modules we used in our app for proper functioning and yeah you don't have to manually write down every module you used, there's a command for that

It'll automatically calculate what modules you have used with the version.

make sure you're running this command inside your virtual environment, to know how to create one → here.

Let's update our git repository with all the latest changes. 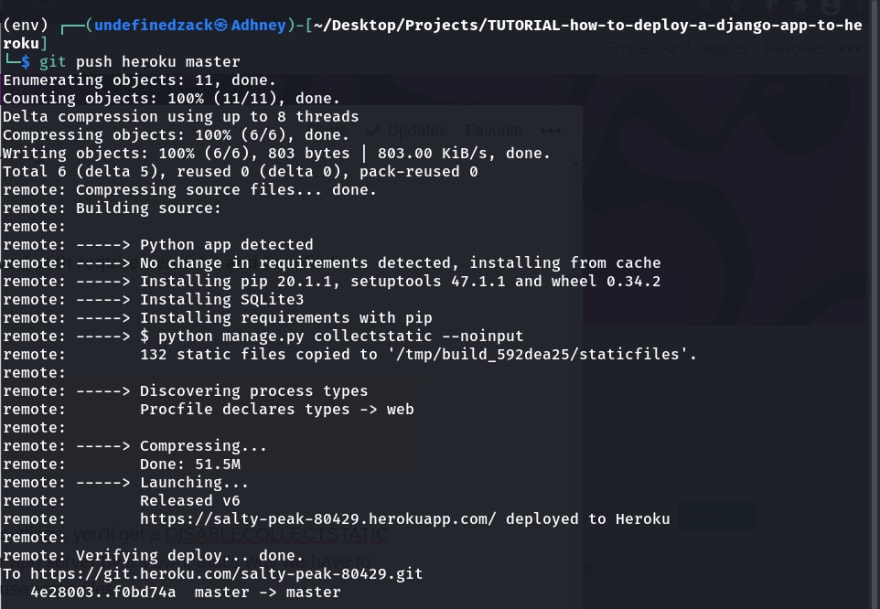 Yup if no error occurs during push command which usually comes if you're doing it for the first time, but hang on, solution's right around the corner waiting for you, you just need to seek it.

You can check out my deployed to-do app at -

undefinedzack
it's all about practice!
How to Create a To-Do app in Django with Bootstrap and Font-Awesome!
#django #python #tutorial #webdev

Once suspended, undefinedzack will not be able to comment or publish posts until their suspension is removed.

Once unsuspended, undefinedzack will be able to comment and publish posts again.

Once unpublished, all posts by undefinedzack will become hidden and only accessible to themselves.

If undefinedzack is not suspended, they can still re-publish their posts from their dashboard.

Once unpublished, this post will become invisible to the public and only accessible to undefinedzack.

Thanks for keeping DEV Community 👩‍💻👨‍💻 safe. Here is what you can do to flag undefinedzack:

Unflagging undefinedzack will restore default visibility to their posts.