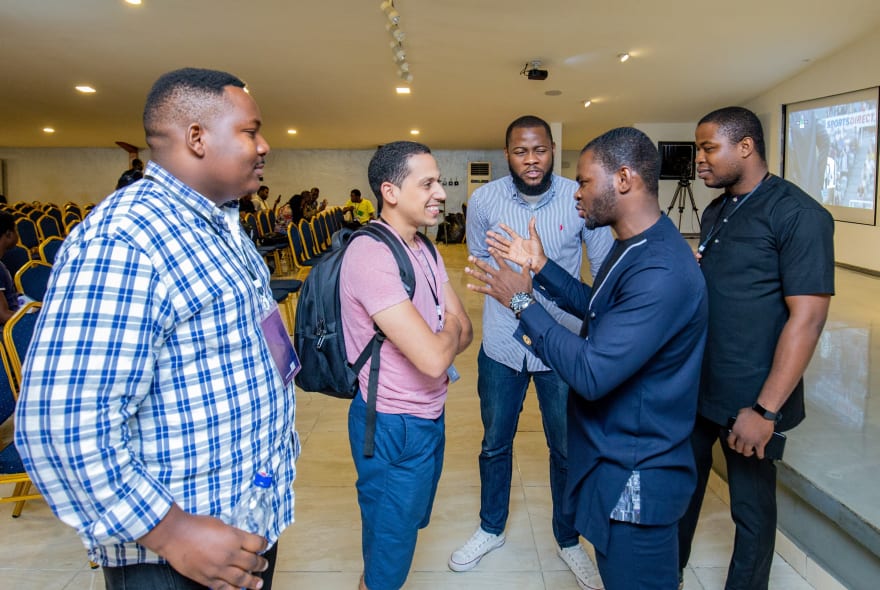 Prowling around Twitter like a roaring lion looking for an article to devour, a technical blog post to consume, a funny video to laugh at, a business post to bookmark, a software engineer to follow, I came across a video where the Vice Chairman of Morgan Stanley, Carla Harris was interviewed….

She said something that struck my nerves deeply. In her words:

I realized that being smart and working hard was not enough. It still wasn’t getting me at the top of the class.

..and later went on to say:

I realized that there was somebody who had to be behind closed doors arguing passionately on my behalf. But at the end of the day while performance currency gets your name on the list that’s being discussed behind closed doors, when your name is called, if no one else in that room can speak on your behalf, they just go to the next name and it has nothing to do with your ability to do the job.

Your politicians have cracked this code that’s why they are up there grabbing juicy opportunities while you’re here arguing baselessly everyday on which is the better frontend framework, or trying to show off your technical prowess by telling every Tom, Dick and Harry that you are the best backend developer the world will ever know (now, this is not bad at all)…but apart from your work that can probably speak for itself :

In the short span of my career (~6 years), I have discovered that the folks(asides being born with a silver spoon) that appear as incredibly lucky due to the kind of opportunities they have access to in their career or business have a ridiculous knack for connecting with people.

They don’t have to be extroverts. They simply possess the willpower and drive to observe people, get to know people, appear in gatherings that involve people that are aligned with their goals, and connect people with one another.

One of my close friends looked at me a couple of months ago and said “Prosper, you are very lucky” and I didn’t fail to ask him how. With all honesty and sincerity, he let me know that over the few years I have been neck deep in the software engineering and technology world, I’ve had several access to opportunities that are hard to come by especially if one is from this region (Lagos, Nigeria)

Perhaps he is right, because I know for sure that anyone that has had a fair bit of whatever is classified as “success” achieved it with some dozes of luck here and there(..in combination with hard-work and book/street smart).

Perhaps, a few portions of that luck was unconsciously engineered to work in my favor. Perhaps, the thousands of people I have connected with, and stayed in connection with, are speaking on my behalf in hundreds of places I’d originally never have access to. Perhaps, I’m not just doing the work (coding everyday & speaking to my laptop alone), I’m also actively sharing that work with other people. Perhaps, I spend a huge chunk of my time actively stalking people I want to be like and connecting them with other people I’ve met.

Engineering Luck & People To Speak For You

As a software engineer, your daily work involves putting lego blocks together in form of 1s and 0s and stringing language APIs together logically to build products.

You are building on Monday, Tuesday, Wednesday, Thursday, Friday. Heck yeah, you’re also building on Saturday, because it’s fun, it’s addictive, you feel incredibly happy and satisfied by your work, the dopamine effects of creating products slaps greatly!….but pause and ask yourself these questions:

It’s great to be smart, hardworking, and world class in the work that you do, but there’s a high probability that if someone doesn’t discover you, or you don’t deliberately do the leg work of connecting with people…you’ll keep hacking away in a rabbit hole while folks with half your intelligence, but rich in people currency will have a mighty seat at the long table of opportunities, wealth and opulence.

Build powerful alliances and maintain a diverse mix of relationships. We are in a very competitive economy. In fact, in the technology industry, there are tons of smart people, even smarter than you. When 10 people are drafted for an opportunity, and y’all have an amazing body and portfolio of work…WHO WILL SPEAK ON YOUR BEHALF?

I’m reminded heavily of the PayPal Mafia and how they kept connecting each other & speaking on behalf of each other in new circles. Yelp, Youtube, SpaceX, Tesla, LinkedIn, Slide, etc and a group of modern millionaires & billionaires emerged this way!

I’m reminded of how people with similar ideas and information tend to hang out with another. You can see clear examples of this in the various elite clubs, groups, political parties, cults and communities that exist in the world. Majority of the times, the only way to break into a circle is for someone within that circle to speak positively on your behalf.

I’m reminded of how I have spoken on behalf of certain people that got them great jobs instantly without rigorous interview processes. I’m reminded of how so many people have spoken on my behalf that got me great gigs, jobs, opportunity to travel the world while speaking at technical conferences, and meeting great decision makers that I’d have never dreamt of sharing the same room with.

I'm reminded that when someone powerful speaks on your behalf, protocols are broken, "due processes" are discarded, the power of network effects start to work for you. "We don't employ people from this region" becomes a fallacy. New roles that have never existed within an organization will be created for you, because someone spoke on your behalf!

Again, Who Is Your Advocate?

I’m writing this short piece because I have seen that millennials would rather have advocates for their romantic relationships than for their life-long careers and businesses.

A new day, another opportunity to invest in yourself, invest heavily in connecting with people and transform your entire life.

Guide to TMUX - Terminal That Remembers Everything

Once suspended, unicodeveloper will not be able to comment or publish posts until their suspension is removed.

Once unsuspended, unicodeveloper will be able to comment and publish posts again.

Once unpublished, all posts by unicodeveloper will become hidden and only accessible to themselves.

If unicodeveloper is not suspended, they can still re-publish their posts from their dashboard.

Once unpublished, this post will become invisible to the public and only accessible to Prosper Otemuyiwa.

Thanks for keeping DEV Community 👩‍💻👨‍💻 safe. Here is what you can do to flag unicodeveloper:

Unflagging unicodeveloper will restore default visibility to their posts.