Modern filmmaking, which is worth nearly 10 billion dolar a year, is a noisy business and highly profitable There was an important theoretical relationship between the number of revenues and the amount of money the film studio spent in producing the film

The variable was recorded as analyzes indicate a large variation in movie revenue, with approximately 80% -85% of total movie revenue coming from the best 20% of movies. The film that is a supplement or belongs to a well-established property will have an impact on competition in the release year. As the release year affects films evaluation

Success in any film production business requires great potential, especially in light of competition from major companies with long experience.Choosing the content for the audience’s desire remains the first of the basics, as diversity in films, whether Funny, social, historical, etc. has its own audience.

Perhaps the success of the drama is due to many factors, including excitement, photography and the content of the story, in addition to employing the talents required. Therefore, we see films at the top that generate revenues and films at the bottom that do not achieve anything. In this study, we analyze data on the revenues of films most interested and compare production success in the film industry.

Most people can understand the visualizations, as 40% of the people can answer basic questions about the information provided on the record visualizations. Therefore, when providing information in the form of linear charts, people show a good understanding of the plotsand provide accurate forecasts in this project.

Our study group that contains 10,866 movies that were released worldwide in the years (1966-2015) Given the large number of data samples from movie releases and in order to determine the variables that determine the success of the most popular movies, we chose the dataset for years instead of movies every year where five years of forty-nine years (2011-2015) were chosen to represent modern films and five years of forty-nine years (2005-2010) were chosen to represent traditional movies and were combined into one large unorganized dataset. This method proved an effective way to answer the research question as it focused on the most profitable films and tried to explain their success, rather than finding similarities between random films that are too small and too big, something that might happen if films were chosen each year randomly and variable data was obtained.

Part I: Comparing modern and traditional movies in the last ten years?

Through the results it was found that traditional films achieved higher revenues than modern films as a result of the following: Through an average study where the best movies achieved the highest revenue is 2.781506e+09 while the lowest real revenue is 3.000000e+00 and on that the data set of the traditional films was chosen to know the factors That contributed to success 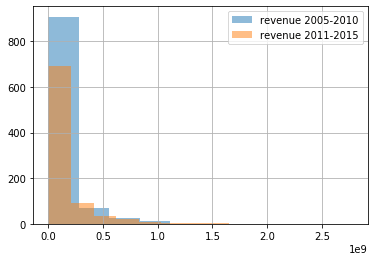 Part II: How do movie studios decide which films to place their bets on?

Are there common factors, such as the duration of the show, gender, staffing, social style of the audience, or production budget, that explain the financial success of a movie in relation to another.

Among the success factors for the industry, films are the show duration, that is, the longer the show, the more revenue, and the less the offer, the less revenue.

Likewise, the voting component increases the more votes, the more revenue, and the lower the percentage of voting, the less revenue. 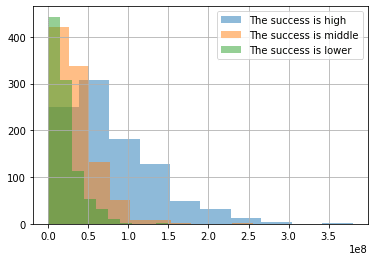 Part III: What is the best so I have not achieved revenue in all years?

By identifying the big companies that have modern equipment and have big capital for the film industry, they achieve great revenues, while the average companies achieve small revenues and accordingly we can find out the reasons for the success of these companies or the failure of other companies.

In the event that success is achieved for a previous movie in the series, the company will strive to produce successful and profitable films in the coming days, because success will be followed by other successes and whoever succeeds in one of the works does not accept failure in other works, and all of this will result in increasing the different audiences. There is no specific work for success, as we found in the analysis that it is difficult to divide success according to the type of film in the study: action (ACTION), science fiction (SCIFI), comedy (COM), documentary (DOC), foreign (FOREIGN), romance (ROM), adventure (ADVENT) and horror (HORROR). Therefore, it is difficult to evaluate the database according to gender, and there are other factors that affect the popularity of films, such as music, photography, award nominations, and the strength of stars, which were important positive determinants of success.

Voting clearly plays an important role in determining movie revenues, as some votes can say something about the nature of the movie and can restrict the film market.

Another variable whose importance was questioned in the analysis but worthy of inclusion was a measure of the strength of the director and actor associated with a film project. It indicates that the analysis believes that the strength of the director and the star is important, which supports the assumption of rent picking that the actor has a market value through large salaries and does little to influence the profitability of films. And successful films may make the stars. Due to the ambiguity of the effect of this variable and the inconsistency of our qualifications

Most of the time, we found that the strength of the directors, production budgets and sequences contributed positively to the film's revenue.

Special effects and computer technology have come a long way in the past ten years, and may have contributed to changing consumers' tastes and preferences for certain types of movies.

If a movie is released in the holiday season, it is expected to see an increase in revenue, while the summer release will bring an expected increase in views.

Comedies tend to experience positive success in the supply market, although the influence of other genres is inconclusive.