Recently I shipped a large project using some of the hot new tools in the React community—Gatsby and MDX—serving a global audience with about 160 different pages (blog posts, landing pages, and indexes). Because I work in the cryptocurrency space, which has a relatively large population of suspicious actors, I wanted to do everything I could for security. One of the ways I did this was to ensure I had a restrictive Content Security Policy (CSP).

Content security policies allow you to whitelist where resources can be loaded from, what external connections can be made, and what types of code can be run. It's a way to lock down the wild-west execution environments that are the browsers of the general public by removing certain attack vectors. I learned that CSPs are difficult to get right, but new policies can be rolled out safely.

CSP rules are granular to the extreme, and the rules for writing them are tricky. Because of how various browsers and common tools work, I discovered that there were many violations I didn't expect, that are difficult to verify, and that there might be new errors at any time. Because CSPs are a whitelist, I had to learn a lot about the details in order to get it working properly.

It took a lot of trial and error. 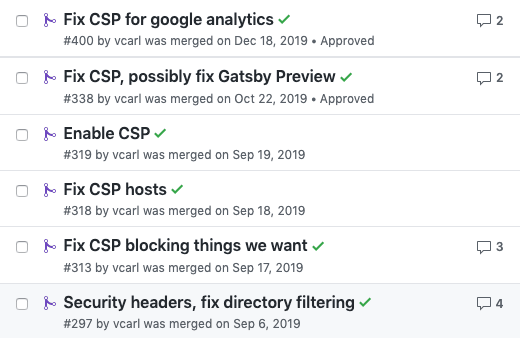 Limits from Gatsby and MDX

One problem I had very quickly was that Gatsby and MDX, at time of writing, require some large carve-outs in order to operate. There are 2 rules that, left out of the whitelist, close a lot of the methods of XSS attack.

These 2 methods are the most common ways to inject malicious JS onto pages. 'unsafe-eval' prevents strings from being executed as code, and 'unsafe-inline' requires that all scripts be loaded from files over the network. With these two omitted and a list of acceptable domains scripts can come from, this gives you a high degree of confidence that you aren't vulnerable to XSS attacks—your server would have to be compromised before malicious scripts can be executed.

However, Gatsby itself places many inline styles and scripts on the page, and MDX uses new Function. Because they make use of this functionality, we have to punch pretty big hole in the security policy. On the one hand, this is pretty great: there are very few problems, it's really really close to letting us be extremely restrictive with our security rules. On the other hand, there are so few problems: so close, yet so far. I can't lock the policy all the way down.

Gatsby has an umbrella issue for these problems, and there's a workaround for MDX (with some restrictions on how you can write your code). There's also gatsby-plugin-csp, which will determine hashes for inlined scripts so they can be whitelisted without unsafe-inline, but it outputs to a <meta> tag thus disallowing report-uri. Ultimately these options didn't work for my codebase.

After getting a CSP that allowed all our images, any iframes, data sources, embedded media, and form submission targets, I added it in report-only mode and set it loose. This is what makes it so easy to roll out a new CSP: you can put it in place where it will emit errors, but not block content. This lets you spot problems before they surface for your visitors and fix errors before they see them.

In rolled the browser errors. Some are frequent enough to make me think it's every user of a certain device or browser, teaching me something about how varied the web is. One error that seems obvious in hindsight is translation services. I found Google Translate specifically difficult to test, though. The website allows you to browse via an iframe, which runs into completely different CSP rules as the in-Chrome "do you want to translate this page?" prompt, and it took a trick to make that prompt appear.

Very fortuitously, one of my good friends published a CSP evaluation tool, csper.io, which helped me catch a number of silly mistakes that accidentally weakened my policy. CSPs have an fiddly syntax, and because they only warn when the rule is violated, broken rules can be invisible.

In CSPs, values without strings are interpreted as URLs. Here, none is actually being interpreted as https://none. This isn't a large problem, because that's not a domain that can be registered and thus not a significant vector, but it's annoying to accidentally leave something subtly broken.

The final CSP is quite long, much longer than I expected going into it. (I've anonymized this to remove specific servers, replacing them with generic addresses)

Because this is a whitelist, I know that I'll have to keep an eye on the violations to see if useful services become blocked in the future. If a translation service starts using a new domain, it won't work until I add it to the whitelist. There are enough real violations to make this a large set to sort through, making that a bit of a challenge.

Csper helped me tighten up my rules by giving me prioritized suggestions, which I found reasonable and easy to change. They were also descriptive enough that I learned a lot about the possible attack vectors that websites face. For a fee, it can also be used for long-term monitoring, which could prove more useful than Sentry's reports due to the specialization.

Overall, I felt adding a CSP was worth the effort invested in adding it, though the process was slower moving than I'd hoped. Because errors frequently came from unusual combinations of browsers, extensions, and third-party tools, I needed to gather several days worth of reports before I felt confident after making any changes to the policy. If I had started from csper.io, I think I would have saved myself a lot of time when I was learning how CSPs work.

Once suspended, vcarl will not be able to comment or publish posts until their suspension is removed.

Once unsuspended, vcarl will be able to comment and publish posts again.

Once unpublished, all posts by vcarl will become hidden and only accessible to themselves.

If vcarl is not suspended, they can still re-publish their posts from their dashboard.

Once unpublished, this post will become invisible to the public and only accessible to Carl Vitullo.

Thanks for keeping DEV Community 👩‍💻👨‍💻 safe. Here is what you can do to flag vcarl:

Unflagging vcarl will restore default visibility to their posts.