This article was originally published on Barbarian Meets Coding.

I love reading! I read before going to bed, at the gym, on the commute, on the sofa, in that cozy corner in our home office, at the coffeehouse, on a plane, in the toilet, in the toilet on the plane (no way), on the train, all-the-time. Here are my top picks for 2019.

My Favorite Fantasy Books of 2019 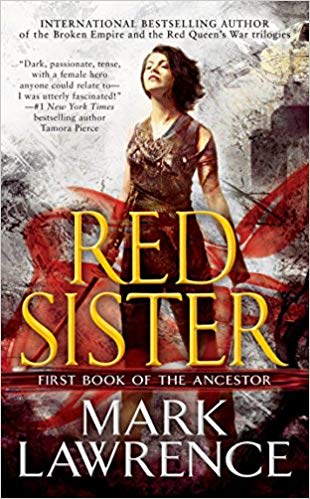 In 2019 I discovered a new author whose bibliography I've been devouring since. The author is Mark Lawrence and his three amazing series are (because I can't just pick one book, come on).

All of these series are really, really good, exhibiting a quite dark, fresh and modern fantasy. I thoroughly enjoyed reading all of them in the order above, but I'm going to highlight Red Sister, Grey Sister and Holy Sister from The Book of the Ancestor because we need more women in Fantasy.

I was born for killing – the gods made me to ruin.

At the Convent of Sweet Mercy young girls are raised to be killers. In a few the old bloods show, gifting talents rarely seen since the tribes beached their ships on Abeth. Sweet Mercy hones its novices’ skills to deadly effect: it takes ten years to educate a Red Sister in the ways of blade and fist.

But even the mistresses of sword and shadow don’t truly understand what they have purchased when Nona Grey is brought to their halls as a bloodstained child of eight, falsely accused of murder: guilty of worse.

Stolen from the shadow of the noose, Nona is sought by powerful enemies, and for good reason. Despite the security and isolation of the convent her secret and violent past will find her out. Beneath a dying sun that shines upon a crumbling empire, Nona Grey must come to terms with her demons and learn to become a deadly assassin if she is to survive…

My Favorite Science-Fiction Books of 2019

I've been really enjoying watching The Expanse, first on Netflix and then on Amazon Prime, and I was shocked and ecstatic in equal parts when I discovered (super late) that the series is based on books! Since then I've been reading on the adventures of the crew of the Rocinante as they cruise this really interesting near future world where humankind has ventured across the stars, colonized mars and developed a whole new culture in the asteroid belt. 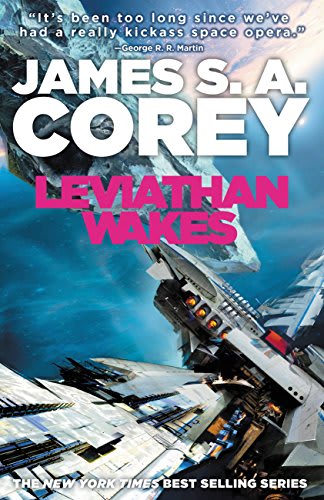 Humanity has colonized the solar system - Mars, the Moon, the Asteroid Belt and beyond - but the stars are still out of our reach.

Jim Holden is XO of an ice miner making runs from the rings of Saturn to the mining stations of the Belt. When he and his crew stumble upon a derelict ship, the Scopuli, they find themselves in possession of a secret they never wanted. A secret that someone is willing to kill for - and kill on a scale unfathomable to Jim and his crew. War is brewing in the system unless he can find out who left the ship and why.

Detective Miller is looking for a girl. One girl in a system of billions, but her parents have money and money talks. When the trail leads him to the Scopuli and rebel sympathizer Holden, he realizes that this girl may be the key to everything.

Holden and Miller must thread the needle between the Earth government, the Outer Planet revolutionaries, and secretive corporations - and the odds are against them. But out in the Belt, the rules are different, and one small ship can change the fate of the universe.

My Favorite Non-Fiction Books of 2019

Of all the non-fiction books I've read in 2019 there are two that stand out: Can't Hurt Me and You're not So Smart. 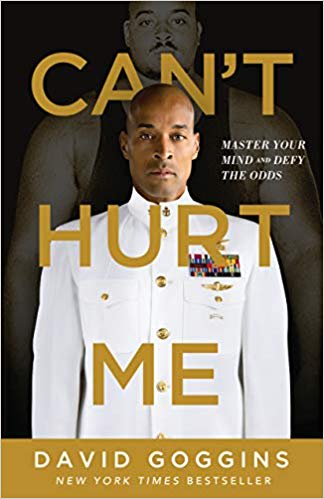 Can't Hurt Me: Master your Mind and Defy the Odds is the incredibly inspirational life story of David Goggins. You read this book and you can't help yourself feel super pumped and wanting to go out there and kick some ass.

For David Goggins, childhood was a nightmare - poverty, prejudice, and physical abuse colored his days and haunted his nights. But through self-discipline, mental toughness, and hard work, Goggins transformed himself from a depressed, overweight young man with no future into a U.S. Armed Forces icon and one of the world's top endurance athletes. The only man in history to complete elite training as a Navy SEAL, Army Ranger, and Air Force Tactical Air Controller, he went on to set records in numerous endurance events, inspiring Outside magazine to name him The Fittest (Real) Man in America.

In Can't Hurt Me, he shares his astonishing life story and reveals that most of us tap into only 40% of our capabilities. Goggins calls this The 40% Rule, and his story illuminates a path that anyone can follow to push past pain, demolish fear, and reach their full potential. 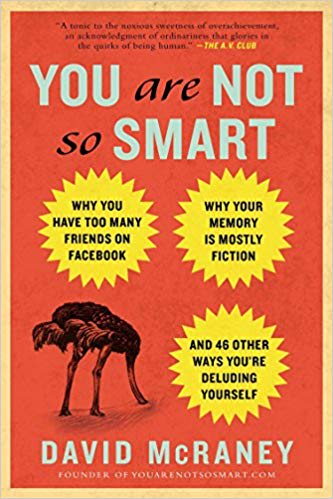 You're not so smart is a fascinating book that takes you through all the flaws and biases that affect our human cognitive abilities. As you read the book you'll find yourself reflecting about how your past behavior is formed by these biases, and about ways to snap out of those behaviors that are wired into the way we humans work. Must read and must practice.

Whether you’re deciding which smartphone to purchase or which politician to believe, you think you are a rational being whose every decision is based on cool, detached logic. But here’s the truth: You are not so smart. You’re just as deluded as the rest of us—but that’s okay, because being deluded is part of being human.

Growing out of David McRaney’s popular blog, You Are Not So Smart reveals that every decision we make, every thought we contemplate, and every emotion we feel comes with a story we tell ourselves to explain them. But often these stories aren’t true. Each short chapter—covering topics such as Learned Helplessness, Selling Out, and the Illusion of Transparency—is like a psychology course with all the boring parts taken out.

Bringing together popular science and psychology with humor and wit, You Are Not So Smart is a celebration of our irrational, thoroughly human behavior.

And as a bonus, take a look at the You're not so smart podcast. As good as the book but in compressed audio format.

My Favorite Audiobook of 2019 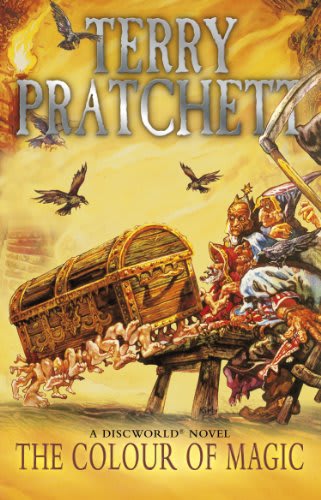 My very favorite audiobook of 2019 was The Colour of Magic. Having the hilarious first book of the Discworld series narrated by a great British accented author is a wonderful (super funny) experience.

In the beginning there was... a turtle.

Somewhere on the frontier between thought and reality exists the Discworld, a parallel time and place which might sound and smell very much like our own, but which looks completely different.

Particularly as it’s carried though space on the back of a giant turtle (sex unknown). It plays by different rules.

But then, some things are the same everywhere. The Disc’s very existence is about to be threatened by a strange new blight: the world’s first tourist, upon whose survival rests the peace and prosperity of the land.

Unfortunately, the person charged with maintaining that survival in the face of robbers, mercenaries and, well, Death, is a spectacularly inept wizard...

And a special mention to Alien 3 because of the crazy awesome experiment or creating an audible film.

My Favorite Programming Book of 2019

Unfortunately, programming books don't read as well as other book genres. I wish there were better (and more compelling) technical books available. I've started lots and lots of technical books this year and laid them down unfinished. Yet there are some jewels.

One of these jewels is Learn You a Haskell for Great Good, a joyous way to learn Haskell. 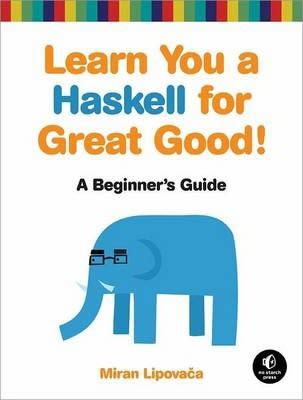 And another of these jewels is Inclusive Components. A great and super important read on how to build accessible (inclusive) components for the web. It's also available in blog format. 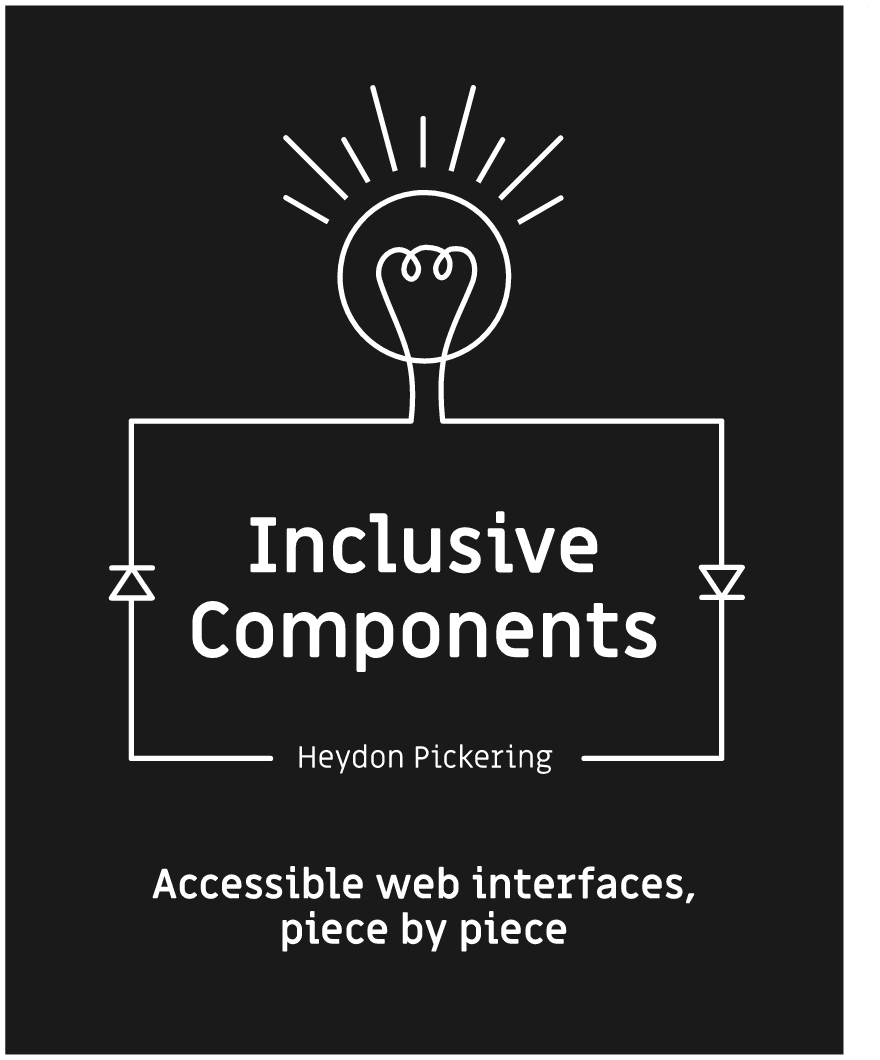 A special mention goes to RefactoringUI which is a very visual guide to building more friendly and beautiful experiences for our users. Really down to earth and extremely practical.

Oh Crap! Potty Training: Everything Modern Parents Need to Know to Do it Once and Do it Right was definitely the most useful book I read on 2019. It was an amazing guide on our journey to teach our son Teo how to go to the potty. Really great read and companion to help your kid develop and learn the ability of going to the toilet.

And that's all! I hope you find something to your liking! Happy reading! For a full list of the stuff that I've been reading, take a look at my reading list all down to 2011.

I just made an eBook: Learn 50 concepts in JavaScript with notes and illustrations!

Top 5 books EVERY programmer MUST read! 📚

Once suspended, vintharas will not be able to comment or publish posts until their suspension is removed.

Once unsuspended, vintharas will be able to comment and publish posts again.

Once unpublished, all posts by vintharas will become hidden and only accessible to themselves.

If vintharas is not suspended, they can still re-publish their posts from their dashboard.

Once unpublished, this post will become invisible to the public and only accessible to Jaime 🔥🧙‍♂️🔥.

Thanks for keeping DEV Community safe. Here is what you can do to flag vintharas:

Unflagging vintharas will restore default visibility to their posts.