Variable is a fundamental concept of programming. A variable is a container that stores a value or data. It is a named unit of data that is assigned a value.

Variables in JavaScript are different compared to other programming languages such as C and C++.

JavaScript is a weakly typed language. It means that you do not have to specify the type for a variable declaration.

The scope is a policy that manages the availability of variables throughout the program.

In JavaScript, variables can be created in three ways, these are:

Before let and const were introduced there was only one method for variable declarations i.e var. Var is a keyword that is used to declare or optionally initialize a variable.

When a variable is declared using var then by default undefined is assigned to that variable. In this case, the name contains a value undefined. If you initialize a variable then it will contain the assigned value.

Var statement declares a globally scoped variable. This means that a variable declared using var is available in the global context i.e throughout the program.

In the above example, we initialized the var variable with value as Joseph Joestar. This variable is now available in the global context of the program. We have also created a function changeCharacter that reassigns the value to the variable and then outputs it to the console. After executing the function, the value that will be printed to the console is Dio Brando.

This type of situation may create confusion while writing large components so you should avoid using var as much as possible. So what should we use instead of var?
ES6 introduced two new ways to create variables i.e using let and const.

As we saw earlier that var declares globally scoped variables which may lead to issues if not used properly. This problem can be solved using let & const.

The variables created using let and const are block-scoped. A block is everything inside two curly braces i.e {}. 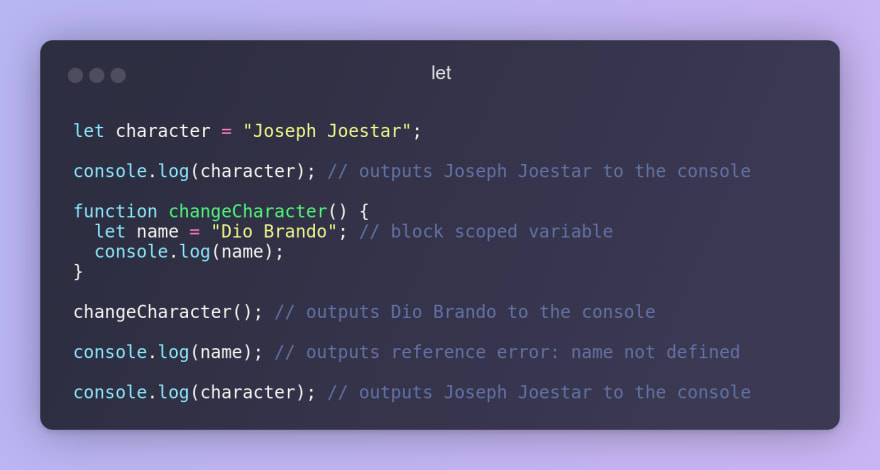 In the above example, we have created a new variable inside a function using the let keyword. This name variable is now block-scoped hence exists only inside that function. If we print it outside the function it will output Reference Error: name not defined to the console because name variable is not present in the global scope.

var is always hoisted in JavaScript. You can use the variable declared using var before its actual declaration.

let and const are also hoisted but they are not initialized.

Once suspended, vivekalhat will not be able to comment or publish posts until their suspension is removed.

Once unsuspended, vivekalhat will be able to comment and publish posts again.

Once unpublished, all posts by vivekalhat will become hidden and only accessible to themselves.

If vivekalhat is not suspended, they can still re-publish their posts from their dashboard.

Once unpublished, this post will become invisible to the public and only accessible to Vivek Alhat.

Thanks for keeping DEV Community 👩‍💻👨‍💻 safe. Here is what you can do to flag vivekalhat:

Unflagging vivekalhat will restore default visibility to their posts.