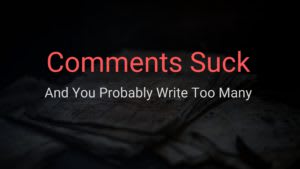 The post Comments Suck and You Probably Write Too Many first appeared on Qvault.

I often hear that we need more and better comments in the code we write. In my experience at previous companies as well as at Qvault, we often need better comments, we rarely need more, and often we need less. Before you crucify me for my sacrilege, let me explain.

Incorrect documentation is worse than no documentation, and redundant documentation is worthless. Let’s remove the chaff. Developers typically (and rightly) take the path of least resistance when trying to figure out what a piece of code is doing. When provided a function with a comment, many developers will read the comment instead of reading the code itself, especially if the function is long and complex. Let’s take a look at this trivial example:

When another developer decides to use this function, they expect that commas will be replaced by colons. As this code clearly shows, however, the commas will be replaced by spaces. Because of the incorrect comment, a reader may take the comment at its word and introduce a bug, they may “fix” the comment and leave an existing bug, or they may “fix” the code and introduce a new bug. The point is, a bug is very likely to be produced if the reader isn’t careful.

The solution would be to give the function a more descriptive name and delete the comment entirely.

It would have been strictly better to omit the comment in the example above entirely. The developer would have been forced to go to the single source of truth (the code) and would have interpreted the meaning correctly.

Redundancy is also quite simply a waste of time. Developers remain best-utilized writing code, architecting systems, and creating tests. We should only write documentation when absolutely necessary.

#3 – Comments for the Outside World – AKA Documentation

As we try to weigh the necessity of adding a comment to code, we need to take into account that it’s more likely that a comment is needed if it exists at an architectural boundary. For example, when writing a package or library we don’t want the users (other developers) of our code to have to worry about the internal workings. The function and class names along will well-written comments (or API docs as the case may be) should be all they need to understand how to use our APIs.

Comments and documents that explain why something is happening are quite important and don’t apply to any of the previous criticisms I’ve made of comments. Comments that explain how the code works are often redundant and lazy. For example,

Here it is clear by reading the code that all instances of carets and question marks are being replaced by dashes and underscores… but why?

A comment that explains that carets and question marks are removed for later use in a regex is an example of a good comment because it’s often hard to express the “why” in code.

Hopefully, these rules of thumb help when you are trying to clean up your code and write better comments. As always, let me know on Twitter if you agree or disagree.

Pitch me on Go

First steps with Golang and WebAssembly