It can be frustrating to post a question on Stack Overflow while worrying if the library or language you're asking about is popular enough to get the quality response you're looking for. And it can be reassuring to put up a question about widely used tools that is likely to get answered.

You can now capture those sentiments graphically with the Stack Overflow Trends tool, which, given a set of tags, will whip up a chart that shows their popularity over time going back to 2009. Here's one of their suggested searches, which shows the trends for Javascript frameworks: 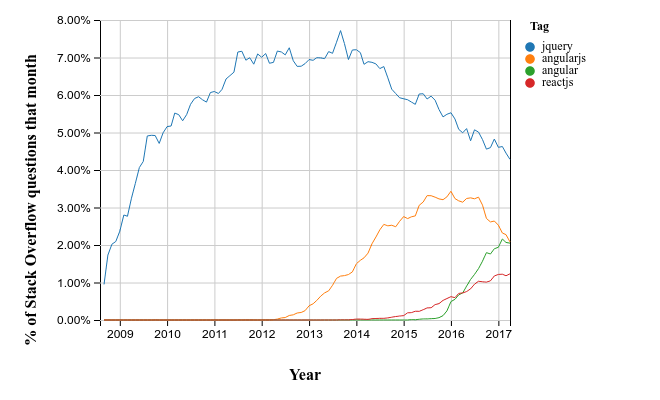 As you can see, Angular and React have been increasingly asked about in Stack Overflow questions since about 2015, while jQuery's relevance has steadily declined in the same time period.

Another pre-made chart shows the emergence of technologies in the data science realm: 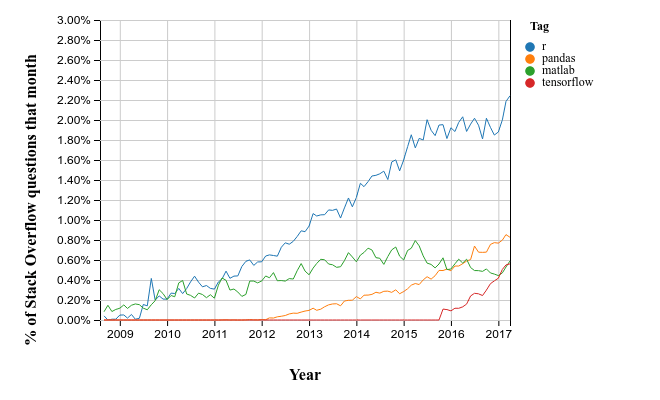 The statistical programming language R has become much more prevalent on Stack Overflow, as has the Python package pandas, while MATLAB has struggled to stay above water. More recently, questions surrounding machine learning library TensorFlow have heated up.

Of course, it's more fun to come up with your own queries. Here's one showing every iOS release since iOS 7 along with a general iOS tag: 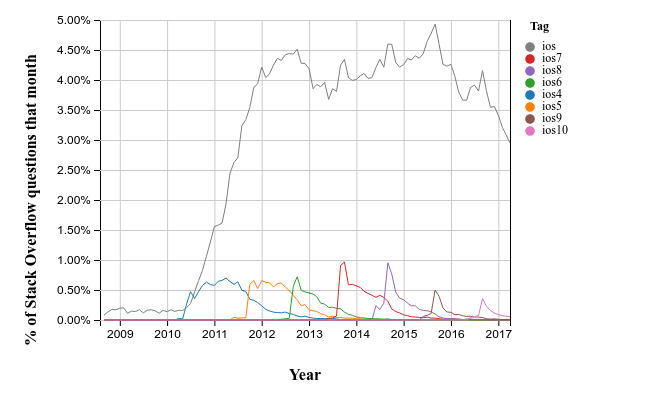 Each iteration has a personal peak around its release in the fall, only to be replaced in the next calendar year. Meanwhile, the general iOS tag is relatively stable.

Keeping an eye on emerging technologies is an important part of being a developer, no matter what language you're working in. It's also a worthwhile intellectual exercise to wonder why certain tools decline and others replace them. So give the Stack Overflow Trends tool a try and let us know what you can dig up—I'm sure there are findings worth blogging about!

I analyzed my six years of food deliveries

Top 8 Programming Languages to Learn in 2021