Hyperledger is the Blockchain family of tools and frameworks for permissioned networks. We've been working with solutions built with Hyperledger Fabric for a while now.

Hyperledger Fabric is a complex system to deploy and it’s important to be careful when we configure certificates, open ports or assign roles, among other things. Luckily there are some good documentation articles from Hyperledger you could read to extend your knowledge if you are interested, such as how to build your first network or writing your first application.

Our workflow integrates different platforms in our pipeline: It starts on Github, goes to Gitlab CI and finally deploys the smart contract on the IBM Blockchain platform.

Today we want to talk about the first part that makes our development faster, the unit, integration and acceptance tests for the chaincode.

Test all the things!

We have automated testing at our core. We apply Continuous Integration and Continuous Delivery in all our projects,
so it made sense for us to create a more robust test suite for our chaincode.

We decided to go with Go, static typing, Go structs and the examples in the Hyperledger Fabric official repositories made testing easy and straightforward.

To make Hyperledger Fabric chaincode easier to test, the developers have created a MockStub struct. A mock is a service simulating functionality so you don’t call the real one while testing. For example, if we use a service to send SMS, we don’t want our tests to send SMS every time we run them, that’s why we usually use a mock, to simulate we call the method and its response. There are still several commands that aren’t implemented in the mock needed for some of the MockStub.

To run the tests locally, we use a Dockerfile that builds our environment. The Dockerfile would be something like this:

We need to install the dependencies, we’ll use hyperledger/fabric-sdk-go, testify/assert to have a nice way of asserting in our tests and optionally if we do acceptance tests, cmd/godog.

We’ll need libltdl-dev and install in the Fabric library manually in the $GOPATH, it didn’t work for us at the time, but this might be easier with the new version of Fabric.

We define the path where our chaincode lives ($GOPATH/src/gitlab.com/TheNeonProject/mychaincode) and run the tests with go test -v ..

To run this locally we use two commands, one to build the Docker container, and another one to run the tests.

We’ll get a response like this if everything went nicely. 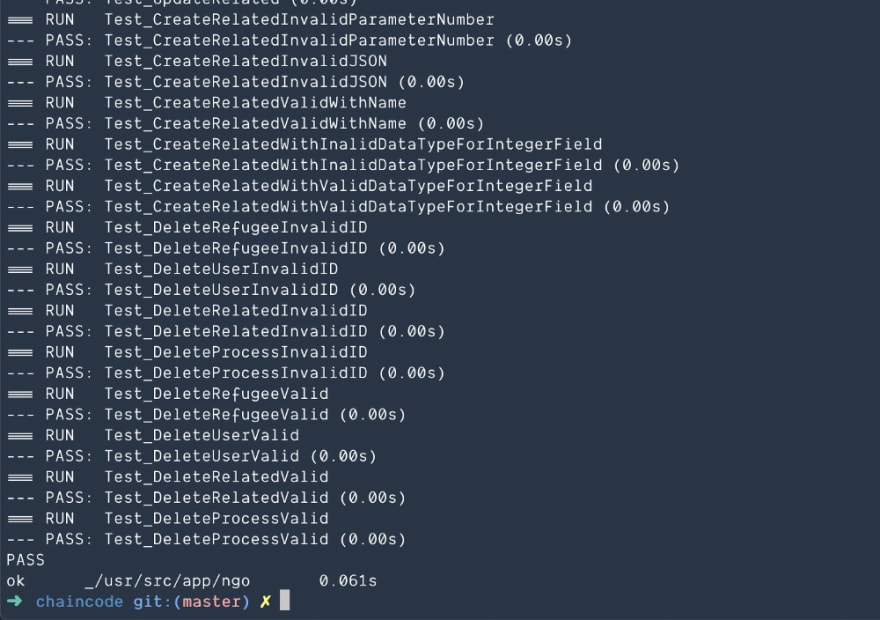 Here you have a chaincode example with a method getAsset. Read through to see how it looks and we’ll explain right afterwards.

This code is for a smart contract with a method getAsset.

The Invoke method is the entry point when calling our smart contract via RPC; if the method is not supported it will return an error.
That would be a very good initial test to check if our test environment is correctly configured. :-)

The getObjectAsBytes method is just used to return a saved object as a response in the method call.

So going back to the getAsset method, it receives a parameter, which is the ID of the resource and, if it exists, it returns the result as JSON.

Now you know what the code does, let’s create some tests for this beast, because, as great chefs do, we always need to taste the recipe before serving.

In this case, the Arrange would need to initialize the smart contract “connection” and, in case of a valid id, create the Asset with its name.

In the Act part of the test, we’ll do mostly the same, use the method name, the ID, and in case of creation or append(edit), the JSON object
with the payload.

That’s it for now! In following articles we’ll talk about how to do BDD for the chaincode, data format manipulation for chaincode methods and Continuous Integration / Continuous Deployment for our chaincode on an Hyperledger Fabric network.

This post was written appeared first on my blog.

How to Automate Your Smart Contract Executions🍦

How to Deploy Smart Contracts on Polygon (Matic) Network? How to Handle Different Errors?

Smart Contracts on the Elrond blockchain

Custodial vs Non-custodial wallets in DLT