For people coming from JavaScript asynchronous programming is nothing new, but for python developers getting used to async functions and future (the equivalent of promise in JS) may not be trivial

Concurrency and parallelism can sound really similar but in programming there is an important difference.
Immagine you are writing a book while cooking, even if it seems like you are doing both tasks at the same time, what you are doing is switching between the two tasks, while you wait for the water to boil you are writing your book, but while you are chopping some vegetables you pause your writing. This is called concurrency. The only way to do these two tasks in parallel is having two people, one writing and one cooking, which is what multicore CPU do. 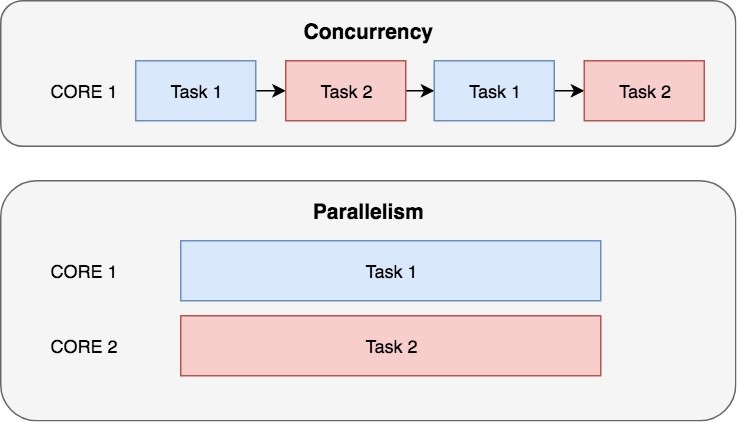 Async programming allows you to write concurrent code that runs in a single thread. The first advantage compared to multiple threads is that you decide where the scheduler will switch from one task to another, which means that sharing data between tasks it's safer and easier.

Another advantage of async programming is memory usage. Every time a new thread is created some memory is used to allow context switching, if we use async programming this is not a problem since the code runs in a single thread.

How to write async code in python

When we declare a function using the async keyword the function is not run, instead, a coroutine object is returned.

There are two ways to read the output of an async function from a coroutine.
The first way is to use the await keyword, this is possible only inside async functions and will wait for the coroutine to terminate and return the result

The second way is to add it to an event loop as we will see in the next sections.

The event loop is the object which execute our asyncronous code and decide how to switch between async functions. After creating an event loop we can add multiple coroutines to it, this corutines will all be running concurrently when run_until_complete or run_forever is called.

A future is an object that works as a placeholder for the output of an asynchronous function and it gives us information about the function state.
A future is created when we add a corutine to an event loop. There are two way to this:

The first method adds a coroutine to the loop and returns a task which is a subtype of future. The second method is very similar, it takes a coroutine and it adds it to the default loop, the only difference is that it can also accept a future, in which case it will not do anything and return the future unchanged.

As you can see to run an asynchronous function we first need to create a coroutine, then we add it to the event loop which create a future/task. Up to this point none of the code inside our async function has been executed, only when we call loop.run_until_completed the event loop start executing all the coroutines that have been added to the loop with loop.create_task or asyncio.ensure_future.
loop.run_until_completed will block your program until the future you gave as argument is completed. In the example we used asyncio.wait() to create a future which will be complete only when all the futures passed in the argument list are completed.

If we execute this code we will see that loop1 will print first print all numbers with prefix c1_1 and then with the prefix c2_1 while in the second loop every 5 numbers the loop will change task.

Now that we know the basics of asynchronous programming in python let's write some more realistic code which will download a list of pages from the internet and print a preview containing the first 3 lines of the page.

This code should be pretty easy to understand, we start by creating an asynchronous function which downloads an URL and prints the first 3 not empty lines. Then we create a function which for each page in a list of pages call print_preview, add the coroutine the to loop and store the future inside a list of tasks. Finally, we run the event loop which will run the coroutine we added to it and it will print the preview of all the pages.

When an unhandled exception is raised inside a coroutine it doesn't break our program as in normal synchronous programming, instead, it's stored inside the future and if you don't handle the exception before the program exit you will get the following error

If you have read everything up to this point you should know how to use asyncio to write concurrent code, but if you wish to go deeper and understand how asyncio works I suggest you watch the following video

Once suspended, welldone2094 will not be able to comment or publish posts until their suspension is removed.

Once unsuspended, welldone2094 will be able to comment and publish posts again.

Once unpublished, all posts by welldone2094 will become hidden and only accessible to themselves.

If welldone2094 is not suspended, they can still re-publish their posts from their dashboard.

Once unpublished, this post will become invisible to the public and only accessible to Andrea Benfatti.

Thanks for keeping DEV Community 👩‍💻👨‍💻 safe. Here is what you can do to flag welldone2094:

Unflagging welldone2094 will restore default visibility to their posts.